Indian benchmark indices ended lower for the third straight week ended September 30 amid weak global cues, depreciating rupee and heightened selling by foreign investors. However, after staying weak for the first four days, the market regained some ground on Friday with the Reserve Bank of India (RBI) raising the repo rate in the expected line of 50 basis points.

The BSE Smallcap, Midcap and Largecap indices fell 1 percent each, while the broader indices lost 0.7 percent, 2 percent and 3.8 percent, respectively, in September. 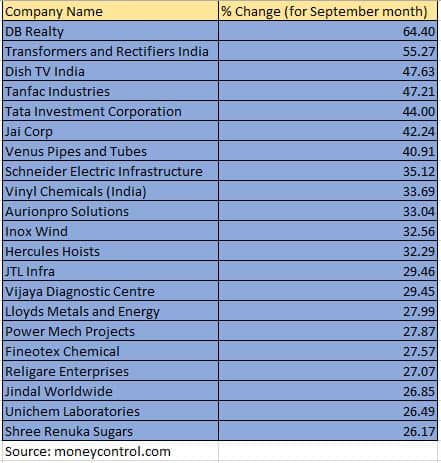 "Over the weekend, global markets felt a tremor after US Dollar Index surpassed alarming levels which obviously has a negative correlation with the equity markets. We started the week with a decent downside gap on Monday amid global weakness. As the day progressed, the selling augmented across the broader market to test the psychological level of 17000," said Sameet Chavan, Chief Analyst-Technical and Derivatives, Angel One.

"In the following session, the markets had a positive start which eventually got sold into. In fact, around mid-week, the Nifty finally sneaked below 17,000 to even enter the sub-16,800 territory. On Friday, the market had a litmus test ahead of the RBI Monetary Policy as the Nifty was placed slightly below key support of 16800. Market participants were hoping for some aid from this event and the RBI governor did not disappoint this time as we not only witnessed a V-shaped recovery post the policy; but also went on to reclaim 17000 with some authority," Chavan said.

With Friday’s smart rally, the Nifty almost engulfed the entire week’s traded-down move and, hence, restricted the weekly losses tad above a percent. "The markets were extremely oversold, but they were reluctant to rebound as global weakness persisted throughout the week. After the RBI Monetary Policy, we have managed to reverse precisely from a key support zone and if global markets support, we may see this relief getting extended in the coming week as well," he added.

What lifted the market sentiment was the RBI's policy rate hike of 50 bps that came in as expected and its comment that India's economy remains on strong footing despite global headwinds. The relief rally was backed by investors' preference for growth-driving stocks from banking, automobile, realty and metal space.

However, global macro factors will continue to dictate the domestic market sentiment going ahead as any fresh spell of negative news could once again trigger the downward spiral. Technically, after a sharp selloff, the Nifty took support near 16,800 and bounced back sharply.

On the daily charts, the index has formed a long, bullish candle, and also a promising hammer candlestick on the weekly charts which is broadly positive.

For the trend following traders the 200- day SMA (Simple moving Average) and 16900 would act as a sacrosanct support zone. Above the same, the reversal wave is likely to continue till 17250. Further upside may also continue which could lift the index till 17400. On the flip side, below 16900, uptrend would be vulnerable and on further decline the index could slip till 16800-16700.

With most key events now behind, market finally found some strength on Friday. After 7 consecutive fall, Nifty witnessed strong rally and closed with gains of almost 300 points. It also reclaimed the 17,000 zones, making the short term technical view positive.

Nifty can now move towards 17,500-17,700 zones with key support around 17,000 and 16850. Auto and consumption sectors would be in focus ahead of monthly sales data and high demand in the ongoing Navaratri festival. Pharma sector is seeing some value buying as market focused on defensive names in times of global uncertainty.

With no major events expected in the following week, markets may be dominated by global news flows. US unemployment and domestic data such as manufacturing, deposits and loan growth numbers could drive investor sentiment next week. The volatility in oil prices and the strengthening of the US Dollar compared to other currencies will be other important factors that may affect the market. Investors must keep an eye out for stock-specific news.

Disclaimer: The views and investment tips expressed by investment experts on Moneycontrol.com are their own and not those of the website or its management. Moneycontrol.com advises users to check with certified experts before taking any investment decisions.
Rakesh Patil
Tags: #Market Cues #Market Edge #Nifty #Sensex
first published: Oct 1, 2022 01:04 pm