On the benchmark index front, Nifty has immediate resistance at 16,959 and 17,027 levels. The downside support for the index is placed at 15,834, said Vidnyan Sawant of GEPL Capital

The Nifty50 corrected to 15,671-level and bounced back sharply and then sustained above 15,834 (August 2021-low). On the monthly charts, it is taking support at 23.6 percent Fibonacci retracement level of previous advance from 7,511–18,604 levels. On the weekly charts, the Nifty is forming CIP (Change in Polarity) near 15,800 mark. On the daily charts, the Nifty is forming higher top higher bottom pattern since last 3 days.

Infosys made a life-time high at Rs 1,953 levels in January 2022 and after that it has corrected till Rs 1,665 levels which is a multiple touch point level. However it has given a consolidation breakout which has been forming since last 6 weeks and also sustained above 20-week SMA (simple moving average) indicating initial sign of bullishness.

On the daily charts, the stock has given a breakout of descending triangle pattern with volume confirmation which shows positive undertone of the stock for the short to medium term.

On the indicator front, the RSI plotted on the daily time frame has sustained around the 60 mark with a higher top higher bottom pattern, indicating increasing bullish momentum in the prices.

Going ahead, we expect the prices to move higher towards the previous swing high of Rs 1,950 post which we might see a move towards Rs 2,230 levels. We recommend a stop-loss of Rs 1,650 on daily closing basis. 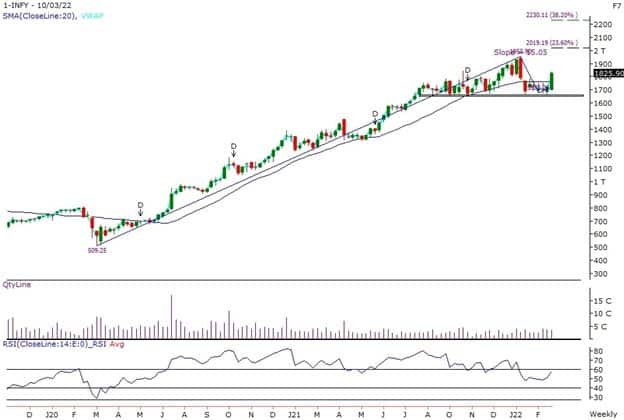 GNFC is maintaining Higher Top Higher Bottom formation on all the time frames like Daily, Weekly & Monthly charts and outperformed the market with sustaining at fresh life time highs. On the daily chart, the stock has formed CIP (Change in Polarity) near Rs 570 levels. Also the volume pick up can be seen in every rise in prices.

On the indicator front, the RSI plotted on the weekly chart can be seen placed above the 65 mark and moving higher, indicating increasing bullish momentum in the prices. 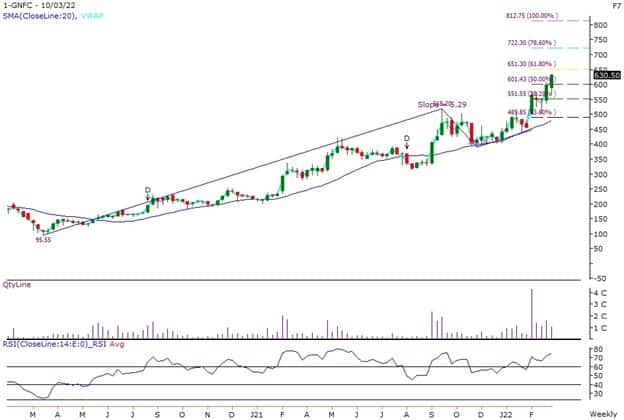 TCS has seen CIP (Change in Polarity) formation and has been taking strong support at Rs 3,380 – 3,350 levels since October 2021 and it has also formed Triple Bottom price pattern near that levels. Although the broader market is showing negative strength in the recent times, the stock is forming Higher Top Higher Bottom pattern in the current week indicating bullish undertone of the stock for the short to medium term.

The RSI indicator plotted on the daily charts is forming higher top higher bottom and sustaining around 50 mark indicating positive momentum of the stock.

We expect the stock to move higher towards Rs 4,040. If it manages to cross Rs 4,040 then eventually it will move towards Rs 4,360 level. One should maintain a strict stop-loss of Rs 3,380 on daily closing basis for this trade. 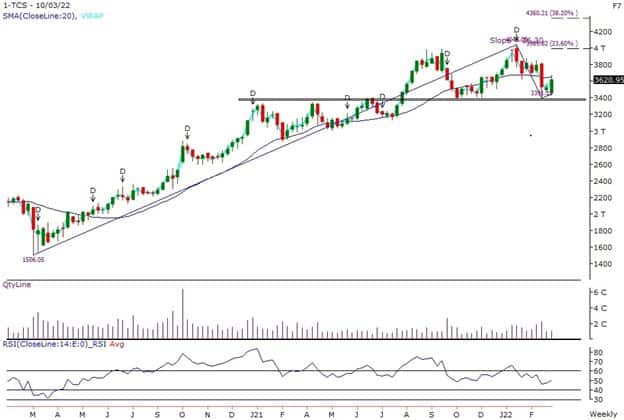