Hot Stocks | Here is why you should buy Indoco Remedies, Jindal Steel and Apollo Pipes for the short term

For trade in Nifty, we advise traders to wait for the prices to dip towards 18,100 –18,000 to initiate a fresh long position for an appropriate risk-reward ratio, said Rohan Patil of Bonanza Portfolio

In the previous week, Nifty50 witnessed three gap-up openings in three consecutive trading sessions and formed a continuation gap on the daily chart. Benchmark index, on October 19, engulfed its previous day's candle and formed an immediate top at 18,600.

On October 20, the benchmark index witnessed a flat opening and later got hammered on the lower side with intense selling. Overall, it was a bear-favoured day where the index filled its continuation gap created on October 18 and close below 18,300 levels.

If we draw an upward rising trend line from the low of 15,513 on July 28 and connect it to October 1's low, which is 17,452, then the next support for the prices is placed at 18,000 levels which is the next point of the trend line support. And the lower band of the trend line is also supported with a 21-day exponential moving average on the daily time frame.

The advance to decline ratio was 1:4 in favour of bears where 11 stocks are on the advancing side and 39 stocks are on the declining side in the Nifty50. India VIX was at 18.31 and was above its 200-daily EMA which means that the volatility is set to increase and traders/investors should not go aggressively long.

As the prices are approaching near its trend line support, it is advisable to wait for the prices to dip towards 18,100 – 18,000 to initiate a fresh long position for an appropriate risk-reward ratio. The resistance is pegged near 18,500 levels if the price successfully breaks the above level then a new high will be on the cards for the Benchmark index. 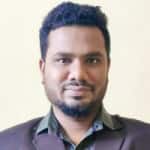 Indoco has given a spectacular rally from the low of Rs 275 on March 12, to a high of Rs 530.25 on August 12, and post that rally prices went in a sideways consolidation for almost ten weeks and traded in a range between Rs 440 to Rs 480 levels.

The stock has formed an ascending triangle formation on the daily chart within that ten weeks period and finally broken out of ascending triangle pattern at Rs 478 levels on October 18 and the prices have registered a decisive breakout that suggests a change in the trend from sideways to upside.

The stock is trading above its 21, 50 & 100-day exponential moving averages on a daily time frame, which is positive for the prices in the near term.

When we observe volume activity there has been above-average volume set up from the past couple of days on the daily chart, which indicates accumulation phase. Momentum oscillator RSI (14) is reading above 60 levels with positive crossover on the daily scale. 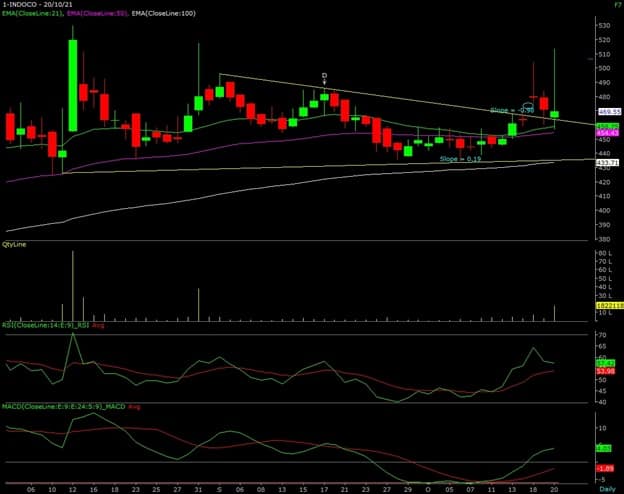 The prices were trading in a channel formation for the past five months and have formed a trend line resistance at Rs 430 levels.

Jindal Steel has broken out of a channel pattern at Rs 446.50 levels on October 14 and the prices have registered a decisive breakout that suggests a change in the trend from sideways to upside.

From the last two trading sessions, prices have given a throwback near its trend line support, which is placed near Rs 430 levels.

Stock is trading above its 21, 50 & 100-day exponential moving averages on the daily time frame, which is positive for the prices in the near term.

The MACD indicator is reading above its centerline with a positive crossover above its signal line. Momentum oscillator RSI (14) is reading near 60 levels which indicates positive momentum will like to continue ahead. The stock is trading in a higher high higher bottom formation on the daily time frame indicates a progressive uptrend in the counter.

Prices are trading within the rising channel pattern and the lower band of the pattern is supported with a 21-day exponential moving average.

On the indicator front, momentum oscillator RSI (14) is hovering near 60 levels and has found support near its previous support zones. The recent dip in the prices can be utilized as a fresh buying opportunity in the counter. 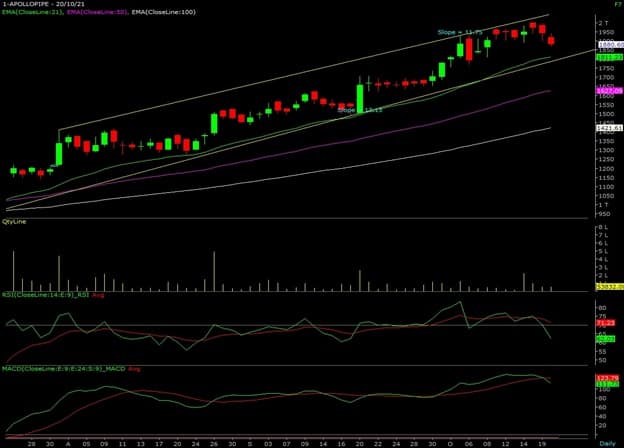