However, inclusion of Indian sovereign bonds in global bond indices, if and when that happens, may funnel flows into domestic debt.

Foreign institutional investors (FII) are warming up to Indian fixed income assets after a gap of seven months, as reflected in the net inflow so far in August. That said, hawkish comments by the US Federal Reserve chief at Jackson Hole over the weekend may mean that this warmth is short-lived.

So far this August, FIIs have bought $624 million worth of domestic bonds, after sustained selling since January. On Friday, Fed chief Jerome Powell reiterated the central bank’s unconditional commitment to tackle inflation, besides highlighting risks posed by elevated and extended periods of high price growth.

In reaction, rate-sensitive short-end and 10-year US treasury yields rose, whilst stocks sold off sharply. 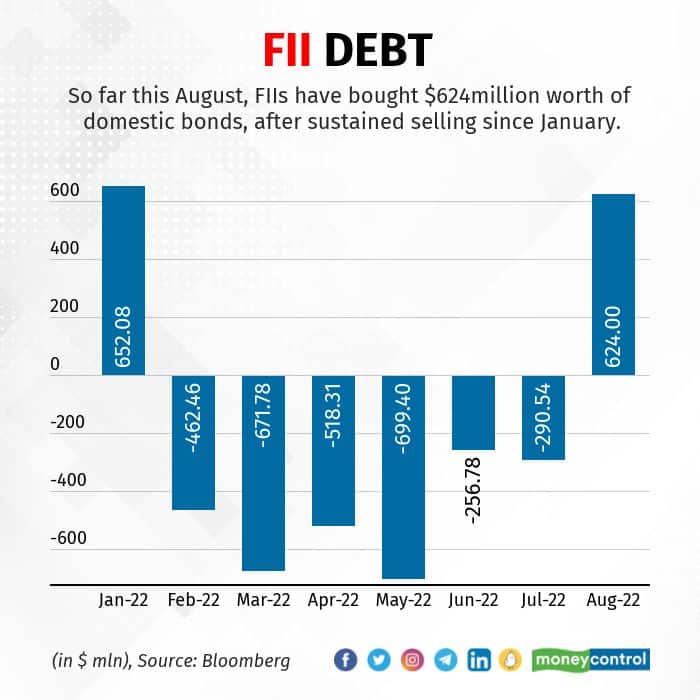 In an email response to Moneycontrol, Radhika Rao, economist at DBS Bank, pointed out that Powell’s comments have triggered a reassessment of the US interest rate trajectory, and sentiments are guarded in the face of renewed volatility.

The effect of Powell’s comments were visible in domestic markets as India’s 10-year benchmark yield rose, while the rupee plunged to a new all-time low of Rs. 80 to a dollar on Monday.

One factor that could sway foreign investors is the Reserve Bank of India’s (RBI) rate hikes, which may be lower than the Fed’s.

Economists expect the RBI’s next hikes to be lower than the past two 50-basis-point increases. This means that the interest rate differential between India and the US may narrow.

"Expectations that a pullback in US inflation will give room to the Fed to shift gears to a slower pace of hikes, has been positive for risk assets, with emerging markets witnessing a return of foreign portfolio interest.

"Adding to this turnaround in sentiment is the correction in global commodity prices, especially energy, which has fuelled the likelihood that regional inflation will taper, allowing central banks to be less aggressive than markets had priced in," said Rao.

That said, there are factors that may help keep the interest of foreign investors intact in Indian bonds.

"There has been an increase in investible funds in the West and we have benefited from this phenomenon. Also, as the rupee has performed relatively better than other currencies, the forex risk has been lower. This, combined with interest rates in India, has helped. However, unlike equity which has witnessed positive net flows every day, debt has tended to be volatile," said Madan Sabnavis, chief economist, Bank of Baroda.

The chatter surrounding the inclusion of Indian sovereign bonds in global bond indices has boosted sentiment. Inclusion in the index would mean that global fund managers may allocate a larger (and steady) investment to Indian fixed income.