Is Byju’s real worth over $10 billion, what is its true worth and other key questions answered

A spokesperson for Byju’s clarifies that there is no liquidation preference or anti-dilution protection on any of the shares and so there is no difference between the primary and secondary shares. All the shares have the same value.

But simply estimating Byju’s valuation at a headline-grabbing figure can be misleading, and the contours of this deal need to be understood to arrive at its true worth. Here are some questions and answers to understand the actuation valuation company, which offers live classes and instructional videos. 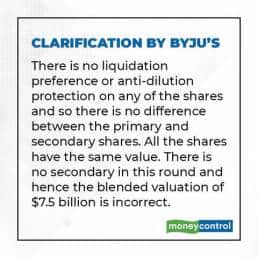 What do you mean by actual valuation?

Let’s break it down. While BOND did invest in Byju at a valuation of $10.5 billion, this may not be the valuation for the whole round. For late-stage startups, fundraising has a primary component in which it issues fresh shares, and a secondary component that has existing investors selling their shares. According to people familiar with BOND’s investment, the American company is in talks to acquire shares from existing investors at a valuation of $6.5 billion.

Entrackr reported on July 27 that BOND invested $23 million at the expected valuation of $10 billion. However, BOND is possibly investing more money in primary and secondaries, although it has not filed for them with the regulator yet.

How can one company have shares at different prices?

In the case of privately held internet companies, their valuations change rapidly as they grow fast and raise capital frequently. Shares of new investors who come in also have more rights. Two good examples are the higher liquidation preference—who gets money first if the company winds up— and anti-dilution rights, which prevents shares from being diluted past a threshold. Old shares may even include shares of early employees (ESOPs) and first investors, whose shares have less rights today and so are sold at a lower valuation.

A Byju’s spokesperson said, “There is no liquidation preference or anti-dilution protection on any of the shares. So there is no difference between the primary and secondary shares. All the shares have the same value.”

An examination of Byju’s’ (Think and Learn Pvt. Ltd) Articles of Association (AoA) shows that some investors do have more rights than others. The AoA outlines the company’s relationship with its shareholders.

For instance, Naspers has the right to subscribe to new shares if its shareholding could fall below 10 percent, according to the company’s Articles of Association. This pre-emptive right is similar to an anti-dilution clause.

Other investors’ shares do not have this right though.

Similarly, Chan-Zuckerberg Initiative (CZ), another investor in Byju’s, has outlined that if Sequoia Capital sells a certain portion of its stake, CZ has the right to “tag along” and sell as well. Again, not all shares have these rights.

How much is this valuation difference usually?

According to a valuation expert, 25 percent is generally the difference between primary and secondary share valuation in a round. “Generally, secondaries in startups happen at a 20-25 percent discount. A discount more than that is highly unusual,” said Santosh N, managing director, Valuations at Duff and Phelps, an advisory firm.

So what is the real valuation of Byju’s?

The fair, or ‘real’, valuation of any company would be the aggregate value of all the shares. That is, if there are shares at multiple price points, you average them out. According to people familiar with the operations of Byju’s, the company was offering investors secondary shares at a valuation of $5 billion until April this year. That valuation has since risen to about $6.5 billion. The blended valuation, or average of all primaries and secondaries, could be about $7.5 billion — that is if a large chunk of secondary share sales go through, people familiar with the matter said.

“There is no secondary in this round and hence the blended valuation of $7.5 billion is incorrect,” a Byju’s spokesperson said.

Is this difference in valuation really a big deal?

Valuation of internet startups are in a league of their own. They are driven by anticipation of future value, investor mindset, and bubbles in a sector. Hence, decoding their actual value, rather than a small portion of shares acquired by one investor at a high valuation, is important.

Note to readers: This article has been updated to reflect the comments of Byju’s. A spokesperson of the company commented on the article after it was published on July 31.