Exclusive Webinar :Don't miss the latest webinar on Global Investing with Passive Products on June 22, 11am
you are here: HomeNewsBusinessIPO

It raised $250 million in its pre-IPO primary fundraise a couple of months ago at a valuation of $5.4 Billion from investors such as Kora Management, Tiger Global, Fidelity, Dragoneer, and Bow Wave.

Food delivery platform Zomato, has expanded its board by inducting 4 women independent directors, making it one of the most diversified boards in India.

Zomato's new board comes ahead of its plans to file its Draft Red Herring Prospectus (DRHP) with the market regulator for a listing of its shares in the coming week, a move that will herald one of India's most anticipated internet initial public offerings (IPOs) this year.

"At Zomato we’ve been working on multiple fronts to strengthen our own long-standing commitment to making our company more inclusive and diverse for years. Be it through initiatives such as an equal parental leave policy for – men, women, same-sex, surrogate or adoptive parents; or period/menstruation leaves.

"And up until now, we had a largely investor run board. But today, I’m elated to share that we have five independent members on our board of eight people, four of whom are women", Zomato co-founder and CEO Deepinder Goyal said in a blog post. 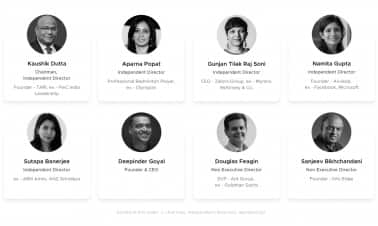 The new members on the board include Aparna Popat, a professional badminton player, Gunjan Raj Tilak Soni, CEO of Zalora group who has a background in Myntra and McKinsey, Namita Gupta, founder of Airveda who was previously in Microsoft and Facebook and Sutapa Banerjee, who comes from a banking background with stints at ABN Amro, ANZ Grindlays. While TARI founder Kaushik Dutta was already a board member, he has now been designated as an independent director. The remaining members include Goyal, Info Edge founder Sanjeev Bikhchandani and Ant Group's Douglas Feagin.

While Indian company laws have made it mandatory to have at least one woman director on the board of companies, India Inc still has a long way to go as the number of women leaders and directors are very few.

Goyal added that having gender diversity on the board was a baseline, not a north star. " More than gender diversity though, what we have always been gunning for is cognitive diversity across levels in our organisation. Today, it makes me truly happy to share that each of our board members come from different occupational backgrounds bringing diverse cognitive skills and perspectives to the table", he said.
People familiar with the development told Moneycontrol that Zomato, which counts investors such as Info Edge, Sequoia Capital, Temasek and Tiger Global, will submit its application for a listing in the coming days.

Zomato recently converted itself from a private company to a public limited company by amending its Memorandum of Association and renaming itself Zomato Limited. Moneycontrol first reported on August 9, 2020, that Zomato was looking to raise money from the likes of Temasek and Tiger Global ahead of a targeted IPO in 2021.

It raised $250 million in its pre-IPO primary fundraise a couple of months ago at a valuation of $5.4 Billion from investors such as Kora Management, Tiger Global, Fidelity, Dragoneer, and Bow Wave. Post this, Info Edge, one of Zomato's earliest investors said its effective stake in Zomato is now 18.4%

This was on top of the $660 million primary round that it closed in December 2020, at a valuation of $3.9 Billion from 10 new investors including Tiger Global, Kora, Luxor, Fidelity (FMR), D1 Capital, Baillie Gifford, Mirae, and Steadview. Goyal had said then that the company is in the process of also closing a $140 mn secondary round and that it was raising primary capital as a war-chest for future M & As and to fight off price wars from the competition.

After the initial Covid shock in March last year, Zomato had said in September 2020 that the online food delivery space has recovered and even exceeded pre-Covid levels in a number of large pockets in India, as more people embrace online ordering.

Zomato's much anticipated public listing comes at a time when the Indian startup ecosystem is seeing heightened funding activity The first four months of the year have already produced eleven unicorns- private firms valued at over a billion dollars or more- compared to 11 in all of 2020.

Apart from Zomato, Policybazaar, Nykaa, and Delhivery are also firming up plans for a public listing, even as there is a buzz of Flipkart and Freshworks listing in the US. These IPOs will be the indicators of how successful India's booming startup economy is and their success could lead to more capital inflows into private markets.
Chandra R Srikanth is Editor- Tech, Startups, and New Economy
TAGS: #Deepinder Goyal #IPO #Zomato
first published: Apr 23, 2021 08:34 pm