Live: Commodity Markets Live: Coffee Prices Are Steaming Up; Here's Why
you are here: HomeNewsBusiness

A look at the top 20 cities by domestic traffic in the pre-pandemic era presents an interesting picture.

Seventeen months into the resumption of flights after the first wave of the pandemic, IndiGo remains the market leader in Indian civil aviation, but there are signs that rivals have started catching up.

Restrictions on capacity and travel, dynamic traffic patterns and this year’s deadly second wave of COVID-19 have caused airlines to significantly tweak their fleet deployment plans. From starting new stations to opening new connections and launching new city pairs, airlines have been busy in the post-COVID era.

Smaller airports have recovered and sometimes exceeded their pre-COVID traffic.

This is largely because of a very small base, the addition of flights under the Udan programme aimed at improving regional connectivity and passengers travelling to their hometowns. The Udan programme is out of the purview of capacity and travel constraints.

A look at the top 20 cities by domestic traffic in the pre-pandemic era presents an interesting picture.

Where is the market leader going?

IndiGo, the country’s largest carrier by fleet and domestic market share, has its stamp across the top cities. The Air India group and IndiGo are the only airlines that are present in all these 20 markets. The airline has a balanced market share in the top metro airports compared to certain Tier-II cities where it has a near-monopoly.

While it is not surprising that the airline is the number one in all these markets, what is surprising is that it has less than 50% capacity share in half of these. For an airline that has over 50% market share countrywide, it is an indication of how the air traffic is increasingly coming from Tier II and Tier III cities.

Delhi and Indore, a study in contrasts

Delhi, home to the largest airport in the country, is also the largest base for IndiGo but has managed to maintain a balance between airlines. IndiGo has only 37.34% of domestic capacity at Delhi. Air India accounts for 19% and Vistara for 14.53%. This is closely followed by Go First, which has 12.61% of Delhi’s capacity, followed by Spicejet and AirAsia India at 9.86% and 6.66%.

The balance goes out the window when it comes to Indore, where IndiGo has an 80.37% capacity share. Its capacity share has increased to 80% from 61% in pre-pandemic times. Indore saw airlines like AirAsia India and Go First desert the station to the benefit of IndiGo. 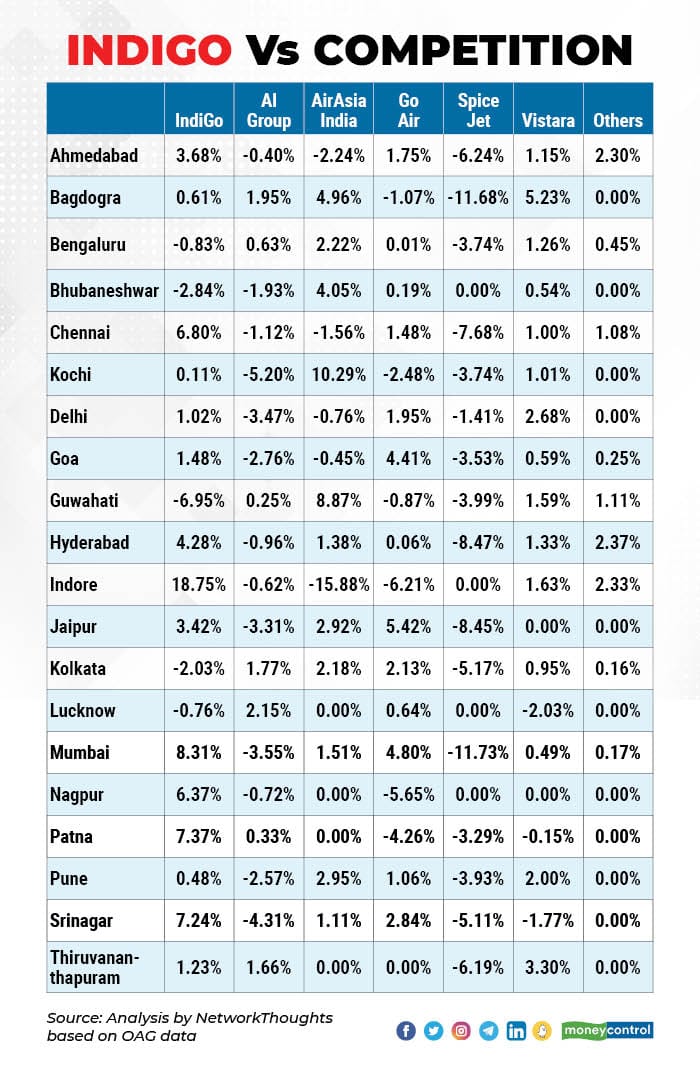 The rest of the market is fragmented. While half the market share remains with IndiGo, the other half is divided among its rivals. Yet, there are pockets where certain airlines are in commanding positions. In Trivandrum, for example, the Air India group has cornered a 39% capacity share. With six major airlines in the country (Air India Group comprising domestic deployment of Air India Express and Alliance Air), anything beyond a 20% capacity share gives you a head-start in competing with IndiGo.

The surprise here is AirAsia India, which has over 20% capacity share in Bagdogra, Bhubaneswar and Guwahati, Air India has 21.59% capacity in Kochi, in addition to the 39% in  Trivandrum. Go First has 21.9% capacity in Ahmedabad, 21% in Patna and 27.7% in Srinagar. Neither SpiceJet nor Vistara has such deployment in airports among the top 20 domestic markets

“The fundamentals of the Indian market remain very sound but like every market in the world has suffered from COVID-19 and the short and sharp actions of regulators seeking to control the spread of the virus,” said Mayur Patel, head of the Asia-Pacific at OAG Aviation, a travel data provider.

“The last two years have been characterised by a series of stops and starts in capacity that have frustrated airlines ready and willing to grow their networks in a broadly conducive market with growing demand and the emergence of increased competition. As COVID-19 hopefully disappears and travel returns to normal then we can expect India to grow and solidify its position as the world’s third largest market”.

Every airline has adjusted its network to its strengths and it turns out that IndiGo gained capacity share at 15 out of 20 airports when compared to its pre-COVID share.

Also Read: For airlines to reach 85% capacity, non-IndiGo airlines need to step up

AirAsia India was operating in 16 out of the top 20 markets in the pre-COVID era. The airline vacated two of those but gained a handsome share in Kochi, Bagdogra and Bhubaneswar. GoFirst (which operated previously as GoAir) improved its positioning in Jaipur, Goa and Mumbai while losing capacity share in Patna and Nagpur to IndiGo.

SpiceJet did not close any markets but its capacity share slipped by over 10% in Mumbai and Bagdogra and between 5% and 10% in Trivandrum, Srinagar, Kolkata, Jaipur, Hyderabad, Chennai and Ahmedabad.

The airline seems to have been the biggest loser as it lost capacity shares in all 16 cities where it operates among the top 20.

Vistara, like SpiceJet, did not close any stations and has seen a minor uptick in its capacity share, indicating stable operations. The airline gained significantly in Bagdogra, where its capacity share went up by 5% and lost only 2% and 1.7% in Lucknow and Srinagar, respectively.