Mumbai seems to have lost the aviation game completely

With Jet Airways shifting its headquarters to Gurugram, Go First is the only airline to be headquartered in Mumbai. The expansion of Delhi to Gurugram and NOIDA, cheaper rents, better infrastructure and connectivity and improved housing are the winning factors for Delhi NCR.

File photo of a Jet Airways airplane taking off in Ahmedabad, Gujarat. Jet Airways, now a company of the Jalan Kalrock Consortium, plans to start operations in the first quarter of 2022. Jet Airways' new headquarters will be in Gurugram, though it will continue to maintain its office in Kurla, Mumbai.

The last few days have been fast-moving in Indian aviation, with the 100-day plan by the civil aviation ministry, followed by SpiceJet doing a second commercial settlement with a lessor, and the mid-week deadline for Air India’s financial bids.

To add to this, Jet Airways, now a company of the Jalan Kalrock Consortium, said that it plans to start operations in Q1 of 2022 even as it lays out plans for the first flight (New Delhi - Mumbai) and holds discussions with airports and lessors for slots, night parking and planes.

The most interesting aspect is that its new headquarters is in Gurugram, and it will continue to maintain its office in Kurla, Mumbai.

Over the last many years, the aviation industry has slowly shifted out of Mumbai. There are more reasons than one for the same. With this move by Jet Airways, Go First is the only airline which will remain headquartered in Mumbai (though its registered address is New Delhi). Mumbai once had Kingfisher Airlines, Jet Airways and Go Air, along with national carrier Air India.

As India opened up civil aviation in the early 1990s, a spate of new airlines came up. They included Jet Airways, Air Sahara, ModiLuft, NEPC and Damania. Their headquarters were split between Mumbai, then the largest airport in the country, and Delhi, the largest metropolitan region in the country.

The first phase was short-lived, with Jet Airways and Air Sahara surviving for the longer run. East West Airlines had its headquarters at Thiruvananthapuram and NEPC at Chennai.

Slowly, but surely, the shift had started taking place.

The airlines which came up later may not have survived for long, but most were based out of Delhi NCR. They include Air Mantra, Indus Air, MDLR and Zoom Air. None of them succeeded and so was the case of the airlines which sprung up across the country - be it Air Costa based out of VIjayawada, Air Pegasus in Bengaluru, Air Carnival in Coimbatore, Paramount in Chennai or Air Pegasus in Bhubaneshwar.

Ironic, as it may seem, Kingfisher Airlines went kaput in 2012. Jet Airways survived until 2019 and Air India shifted to Delhi, leaving behind the engineering division, which has many hangars at Mumbai.

Not just the airlines, traffic shifted as well

Mumbai airport was the largest in the country until the first quarter of financial year 2009 (Q1-CY09) when the crown moved to the Delhi airport. Mumbai got it back the very next quarter - only to lose it again! But since first quarter of 2011, there has been no looking back.

The difference? The award-winning Terminal 3 at the Delhi international airport was operational in July 2010, ahead of the Commonwealth Games. And that tilted the balance in favour of Delhi, as the new terminal allowed growth as it got along additional bays.

The third runway at the airport was operational in 2008, and that meant two parallel runways were available for simultaneous operations, increasing the aircraft-handling capacity of the airport.

The opening of Terminal 3 at Delhi saw Air India move its Mumbai hub to Delhi. This coincided with the induction of the B787 Dreamliners, which led to the airlines launching new flights to Europe and Australia, thereby contributing to the increase in traffic.

Four years later, Mumbai inaugurated T2 - the grand structure, which, like Terminal 3 at Delhi, was widely awarded. But it was too little, too late.

While Delhi now had three runways, with two allowing parallel operations, Mumbai had one main runway and a secondary one, which intersects the main runway, making simultaneous operations unfeasible. 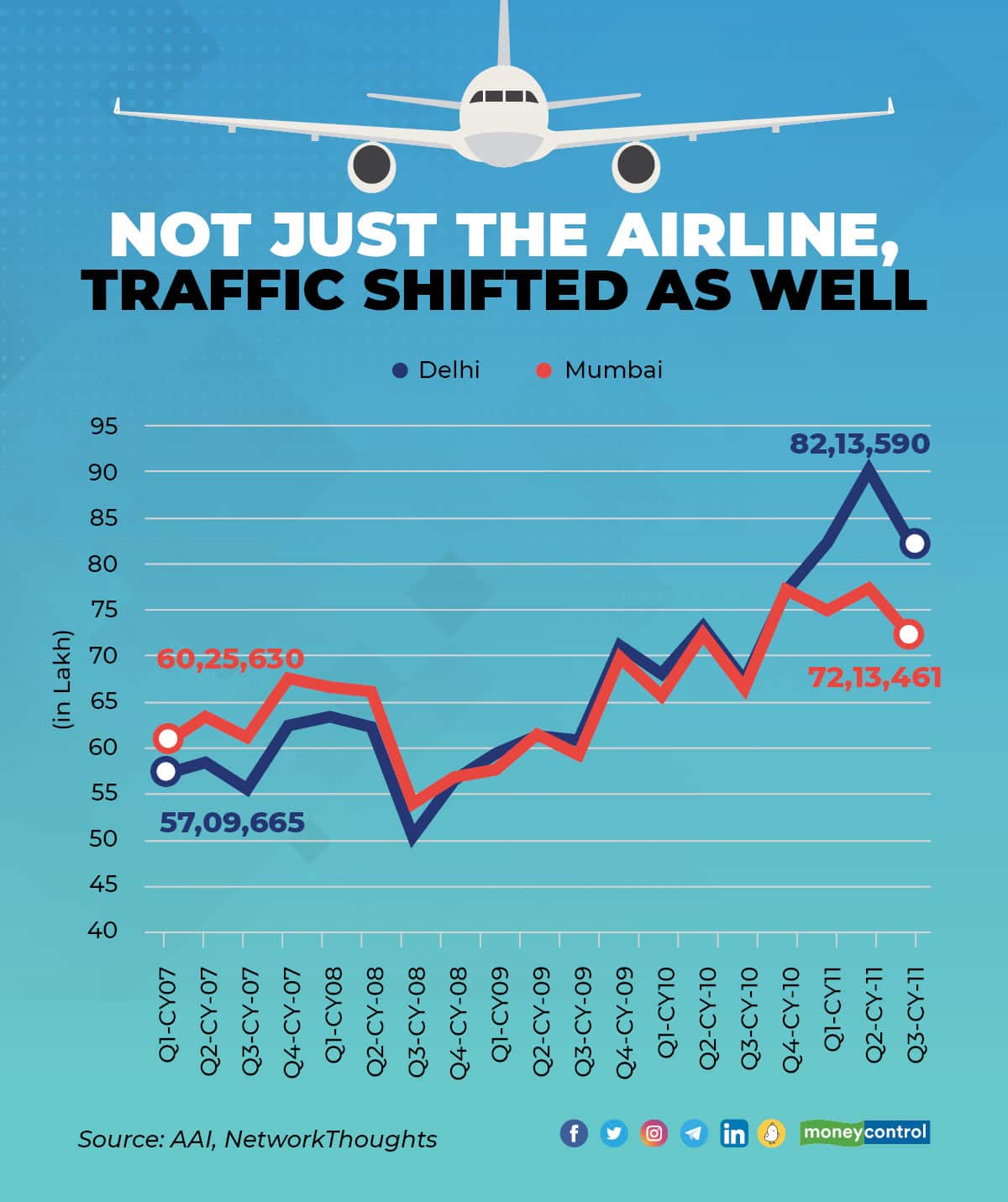 There is more to it

Over the last two decades, Delhi NCR has grown by leaps and bounds, in terms of infrastructure. The expansion of the metro to the key hubs of Gurugram and NOIDA and the airport, the setting up of new sectors in Gurugram and the fast-paced development are some of the factors which have attracted airline HQs to Delhi NCR.

Cheaper rents, as compared to Mumbai, better infrastructure and connectivity and improved housing over Mumbai have been some of the factors which has tilted the scales in favour of Delhi NCR.

For more reasons than one, not all the talent in the aviation industry is willing to make a move from Mumbai to Delhi or vice-versa. But with airline after airline going down in Mumbai, opportunities for desk jobs in the airline are fewer in Mumbai. With an increase in number of airlines headquartered at Gurugram, the churn and opportunities are higher.

Akasa is rumoured to be headquartered in Mumbai but time will tell which city it chooses. A headquarter and base can be different, but typically it is not. However, the constraints at Mumbai airport are so grim that Go First has more aircraft parked in Delhi than Mumbai, its home.
Ameya Joshi runs the aviation analysis website Network Thoughts.
Tags: #airline industry #airlines #aviation #Jet Airways #Travel
first published: Sep 18, 2021 04:18 pm