Imports set to reach record high of $600 billion in FY22

Even as the government celebrates India’s highest ever export turnover of $400 billion, imports are set to continue their strong rise in the first half of FY23 led by high prices of crude oil along with gold, diamond and industrial inputs.

After crossing the $550-billion mark in the first 11 months of the financial year, India’s import bill is set to hit record highs in FY22 and probably touch $600 billion, sources say. Led by high prices of crude oil along with gold, diamond and industrial inputs, imports are set to continue their strong rise in the first half of FY23.

The government has, however, been silent about its import bill even as it celebrated a record export turnover. The import numbers were not mentioned even in the press release issued by the commerce ministry to announce the achievement on exports or at the official briefing on March 23. The government announced that day that export turnover had risen to $400 billion by March 21, which was historic and impressive considering the disruptions experienced by global supply chains through the year.

India is estimated to have exported merchandise worth $26 billion in the first 21 days of March, after exporting goods worth $374 billion between April and February of FY22. As a result, total exports reached the $400-billion annual target set earlier for FY22, with the final tally for the year set to reach $410 billion. The government broke the convention of releasing trade data on the last day of the month to make the announcement.

Also read: Explained | How India's exports crossed $400 billion for the first time ever

While there has been no talk of the burgeoning import bill, officials say that the government is concerned. ”Imports have risen in every month of FY22 and the government is aware of the dangers of runaway imports. An action plan is being drawn up,” a senior commerce department official said. 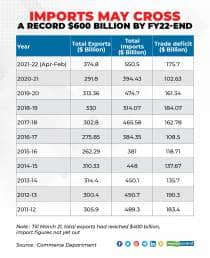 Ballooning inbound shipments are also set to result in the highest-ever trade deficit in FY22. As India is a net importer, this leads to a widening of India’s trade deficit, the difference between the total exports and imports over a period. Largest import categories include dominated by commodities, and goods lower down the value chain

The government expects imports to continue to climb due to a host of issues, including a continuing rise in commodity prices, a weakening rupee, uncertainties in trade flows due to container shortages and logistics prices, and high industrial and consumer demand in India.

A global super-cycle has kept commodity prices high across the board since late 2020. In the aftermath of COVID-19, a rise in the prices of key input materials, such as steel, chemicals, ores and plastics, has continued to strengthen.

The Bloomberg Commodity Spot Index, which covers a broad basket of globally traded raw materials, has risen more than 45.6 percent over the past year and has shot past a high not seen since 2011.

The impact of rising commodity prices on India’s exports is evident when considering India’s single largest import item (crude oil), which alone has a 20 percent share in the country’s overall imports.

The crude oil import bill rose 58 percent in the first 10 months of FY22 to $93.9 billion, up from $59.4 billion in FY21. This was due to the continuously rising price of crude oil, pushed up by uncertainties in the post-COVID world, demand spiking for oil and, finally, the Russian invasion of Ukraine. Beginning the year at $64.80 per barrel, the price of Brent crude has now almost doubled to $115 per barrel. Most analysts expect crude oil prices to stay elevated in the short term.

“Higher gold prices are here to stay as despite Federal Reserve chair Jerome Powell signalling that the central bank could aggressively tighten interest rates more than markets are expecting due to higher inflation, gold bulls have not loosened their grip,” said Bhavik Patel, commodity analyst at Tradebulls Securities. Meanwhile, diamond imports rose to $20.7 billion in the first 10 months of FY22, up from $17 billion in FY21.

The cost of edible oil imports has also risen as global prices have rallied due to labour shortages in Malaysia and changing trade rules in Indonesia, two of the largest producers. Up to 60 percent of India’s edible oil requirements are met by imports, in which palm and soybean oils account for 86 percent. Prices of these two oils have risen in particular.

The fall in the value of the rupee is expected to increase the import bill further. Combined with the geopolitical risks arising from the Russia-Ukraine conflict, the weakening domestic currency is also expected to push the import bill higher for key items beyond petroleum and edible oils, according to India Ratings and Research (Ind-Ra).

While all imports are set to get costlier, the cascading effect of a fast-depreciating currency is set to result in higher prices of imported gems and jewellery, fertilisers, and capital goods, Ind-Ra said.