Web3 is all about blockchain and decentralisation, with likely implications for privacy, and plagiarism.

If you follow technology, it would be impossible not to get dragged into the Web3 blackhole – right from WhatsApp chats to Twitter circles. For tech founders, some of it has become a key discussion point and they are keeping tabs on what’s being done in this space. A few have already taken the plunge.

Web3 is a natural progression where cryptocurrency and other services operate on what’s called the blockchain or distributed networks.

But what exactly is Web 3.0 and why has it taken centre stage? Moneycontrol spoke to people working in this space to break down what Web3 is, what it changes and more importantly, what it means for consumers.

Before we get into this, let’s step back to understand how services work now.

Since the onset of the pandemic in March 2020, online services have become an integral part of everyday lives. People shop, order food, watch movies, use social media and even buy medicines online. Most online services such as email, social media and shopping run on the cloud, which is a remote data storage and processing service available via the internet. Amazon Web Services, Google Cloud, Microsoft’s Azure and other platforms offer cloud services.

This means that any information that users share on such platforms is stored with the cloud service provider used by an online service, whether it is food delivery or e-commerce. This version of the internet is called Web2.

Web3 is the next version of the internet, where services will run on blockchain. That’s how Tariq Wali, chief technology officer of Chingari, a short-video platform, explained Web3, even as he said that likening the cloud to blockchain is not the right comparison.

If we were to compare, if cloud platforms or on-premise infrastructure form the foundation for services in Web2, whereas in Web3, all services are built on top of a blockchain.

The key difference is that the cloud is controlled by giants such as Amazon, Google and Microsoft, and on-premise is controlled by companies/organisations, and is centralised. In the case of blockchain, data is distributed across networks and no single entity owns the information.

So that’s what Web3 is all about – a decentralised internet that runs on a public blockchain, which is also used for cryptocurrency transactions.

Blockchain runs on smart contracts, which are based on a set of protocols that differ from one blockchain to another. For example, Solana has a different protocol from Ethereum. These protocols need to be satisfied before services can be run on them.

This is different from the centralised internet where top companies like Meta (formerly Facebook), Google, Amazon and Apple own the bulk of user data and drive a significant share of their revenue from it.

What are the examples of Web3?

Obviously, cryptocurrency is a key building block for Web3 since one needs to transact crypto coins or tokens to participate in them. But Web3 is a lot more than that and its use cases are still evolving.

The best example of the Web3 universe is NFTs or non-fungible tokens, which are bought using crypto coins. They might be JPEGs (oversimplification again), but with Bollywood actors from Amitabh Bachchan to Salman Khan entering the NFT space, the sector is ripe for action. Recently, Bachchan's NFT collection was auctioned for close to $1 million. There are more celebrities getting onto the platform.

Why is it important?

To understand why Web3 is important, it’s necessary to understand the purpose of the previous versions of the internet – Web1 and Web2, which spanned the period from the 1990s till date.

Web1 started with static or personal web pages. In the beginning of the 1990s, people were just getting started on the internet and it was filled with web pages that were static. There was not much scope for interaction.

Then came Web2 in the 2000s and with it Big Tech like Facebook, Google and Amazon. This was the era of user-generated content. This is the part most people are familiar with.

Knowingly or unknowingly, consumers generate huge volumes of content or data when they search, shop or upload videos and pictures. All this data is stored in the servers of the companies that the people interact with. This means that intermediaries become custodians of user data and can profit from it through advertising.

The scale of such data collection by such companies can be gauged by their sheer dominance in the market. Google is the market leader with over 90 percent share in the search engine market. Facebook has a 72 percent market share in social media, according to data by Statcounter.

For such companies, the key growth metric is the number of users on the platform and the time they spend consuming content. The more time spent creating content, the more data the company can collect, helping it to improve its AI algorithm and its advertising engine, a key revenue model for the company.

This brings with it problems such as privacy, and plagiarism. Web3 can help solve some of these issues.

How will Web3 solve these issues?

A Bengaluru-based AI executive who works for an Indian social media company said plagiarism is rampant online. It’s so easy to copy original content and build a following around them on social media.

The August 2021 report from Facebook proved just that. US tech reporter Casey Newton analysed the top 19 most widely viewed posts and found that only four were original while the rest were plagiarised. This means that those who copy content get compensated way more than the original content creator.

“Plagiarism makes it harder for creators to get adequately compensated,” the executive said, adding that Web3 might help address that issue. The transparent nature of blockchain makes it easy for anyone to track the originator of content.

Pratham Prasoon, a 17-year-old Web3 developer working for US-based startup ThirdWeb, said this would also cut out the intermediary since a decentralised web is transparent and benefits will reach creators directly. 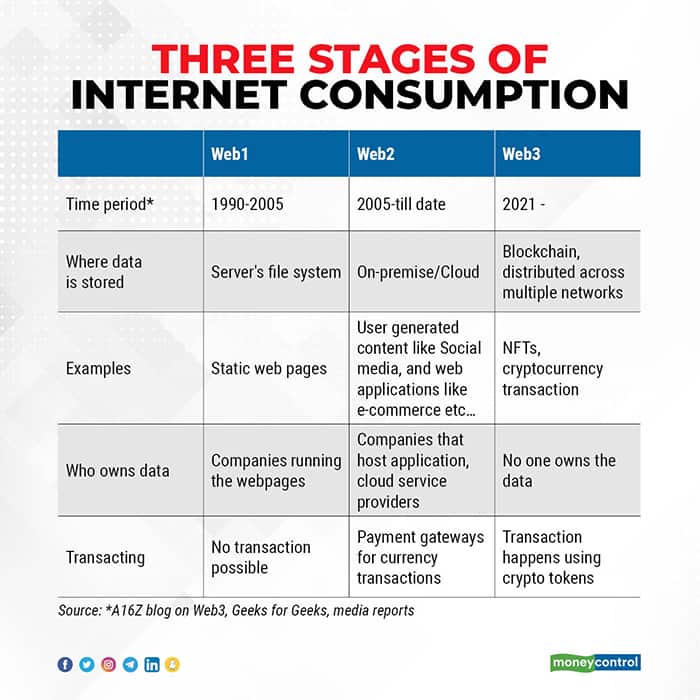 Does this mean that everyone will all be writing code and Web2 as we know it will be obsolete?

Not really, says Prasoon. According to him, both will co-exist and Web3 will be built on top of Web2.

Consider the application MetaMask. It is available as a Chrome (Web2 service) extension that can be used to create a crypto wallet to access Ethereum applications. Then there are applications like BitClout, which is an open source cryptocurrency project and media platform, where users can buy and sell celebrity coins based on their reputation.

The difference, if any, would be for coders, who would need to adapt to Web3.

What skills are needed to work on blockchain?

People can use the same programming languages they use for other applications – Python, Java, or Javascript. Learning languages such as Solidity, used on Ethereum blockchain, and Rust, which is used on Solana, might come in handy, but might not be necessary.

Are Metaverse and Web3 related?

Though there is a lot of interest around both, experts said both are not correlated. The metaverse is about creating digital avatars and interacting with others in virtual spaces, be it offices or arcades. It does not have to be on a blockchain.

Most role-playing games offer similar services. Imagine metaverse as a role-playing game in a 3D realm. Microsoft is rolling out metaverses through MS Teams in 2022, which will probably run on Azure rather than Ethereum or Solana.

The whole point of Web3 is decentralisation. While building a metaverse on blockchain is a possibility, it does not make it a purely Web3 use case.

Where is India in Web3 or metaverse?

Despite the buzz, the idea is fairly new to India and will take time to develop. But it is becoming a part of boardroom discussions.

The Indian social media executive cited earlier said the company is actively discussing what it can do with Web3, especially on the creator front, so that they can benefit.

Polygon, founded by Jaynti Kanani, Sandeep Nailwal and Anurag Arjun, is a made-in-India cryptocurrency protocol that crossed a market capitalisation of $10 billion recently.

Indian gaming platforms like Dream11, Mobile Premier League and Nextwave Multimedia, a subsidiary of gaming company Nazara Technologies which owns the World Cricket Championship franchise, are looking to launch their own NFTs.

But not many are excited. An investor, who did not want to be identified, said, “When you see the customer aspiration cycles going down, they want to see me create excitement about something new. So I am not saying that metaverse would be bad, but I think we really have to see how this pans out.”
Invite your friends and family to sign up for MC Tech 3, our daily newsletter that breaks down the biggest tech and startup stories of the day
Swathi Moorthy
Tags: #blockchain #cryptocurrency #NFTs #Web3
first published: Nov 29, 2021 10:55 am