Open Network for Digital Commerce (ONDC) may start charging consumers a per transaction fee of 1-2 percent by the end of the year, and the number could go down to as low as 0.1 percent later when it hits scale, according to sources close to the developments.

The open e-commerce network, which started its pilots in five cities in April, is currently not charging any fees to customers.

While ONDC is piloting its protocols free of charge for buyer-side apps and seller side apps as well at present, eventually it plans to seek a subscription fee from the buyer and seller platforms that may amount to a few thousand rupees.

“The per transaction fee could be 1.5 percent initially, and eventually may even be as low as 0.1 percent or 0.2 percent when the network hits massive volumes. This comes out of the price paid. When an item is bought, the consumer pays for it,” said a person in the know.

The open network seeks to increase e-commerce penetration in the country to 25 percent in the next two years, reaching 900 million buyers and 1.2 million sellers through the open network, while hitting the $48-billion mark in terms of gross merchandise value.

ONDC's Managing Director and Chief Executive Officer T Koshy refused to comment on the exact pricing figures to be charged and their timelines.

“To begin with, for some time we may not charge anything. Later, we might start charging a small transaction fee which itself could eventually come down to 0.25 percent when the volumes scale up," he said. 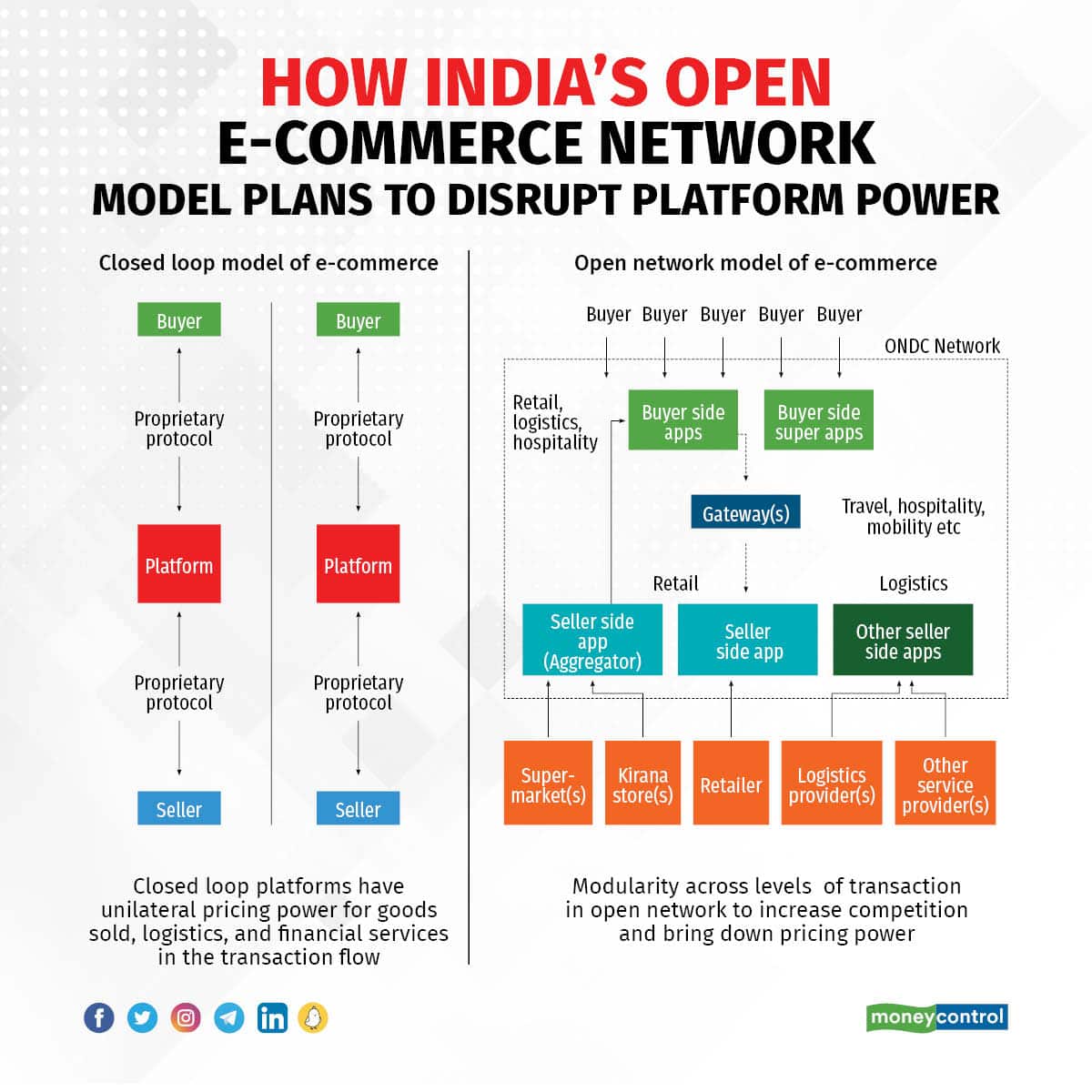 "ONDC doesn’t have to give any investor any dividend as we are a section 8 company. We just need enough money to run the network sustainably and to invest for new functionalities and features the industry needs,” he added.

Koshy also said that ONDC will not prescribe any specific fees to be charged by the network participants like buyer-side apps, seller-side apps, logistics providers.

"The open network model will lead to better prices due to increased competition. If anyone is charging unreasonable fees against the service they offer, the buyers and sellers may shift to a different service provider," he explained.

Moreover, the gateway application, which will be the connecting bridge between the buyer app and seller app by design, can act only as a switch to broadcast the search request to all relevant sellers which have to be reconfirmed periodically through third party audit, to ensure that they are not favouring one seller over another.

"There will also be a reputation ledger with respect to all buyer apps, seller apps and sellers by ONDC. The specifications for this are still being finalised and it might take 6-12 months to get all these systems in place. Further, we are sure that there will be social audits of the behaviour of the network participants by subject matter experts on a continuous basis," said Koshy.

Moneycontrol reported last week that the network is also exploring ways to build a system that will help FMCG companies like Dabur, ITC, Nivea and Unilever offer separate deals and price points to distributors, retailers and individual consumers.

In April, the network piloted a soft launch in five cities – Bengaluru, Delhi NCR, Shillong, Bhopal and Coimbatore. Dynamic pricing, inventory management and optimisation of delivery cost are the three important pillars that ONDC is banking on to reduce the cost of doing business for everybody, including retailers.