Retail inflation for May at 6.30%, highest in six months

CPI uptick showed that the impact of local COVID-19 lockdowns in May was more severe than expected, said economists. However, given the Monetary Policy Committee's inclination to support growth, a status quo on monetary policy is expected

Consumer price inflation or retail inflation has inched up in May

Consumer Price Index-based inflation (CPI) for the month of May came in at 6.30 percent, much higher than April's 4.23 percent, and outside the Monetary Policy Committee's inflation targeting range of 4 (+/-2) percent for the first time since November 2020.

The higher inflation month-on-month was primarily on the back of a substantial hardening of food prices. Food inflation (CFPI) was 5.01 percent in May compared with 1.96 percent in April, official data showed.

Among the sub-groups, a broad rise in prices was seen across the board.

Inflation for pulses and products rose 9.4 percent, while that of non-alcoholic beverages rose 15 percent. The rise was steep even for some non-food items, with fuel and light registering an inflation of 11.6 per cent, and transport and communication at 12.4 percent.

The retail inflation numbers for May came in as a surprise for analysts, who said that it reflected that the disruption due to local COVID-19 lockdowns last month was more severe than anticipated.

"The month-on-month uptick in the CPI in May 2021, which saw widening state-level restrictions, is nearly as high as the hardening seen in April 2020 during the nationwide lockdown, testing the assumption that supply disruptions have been limited in the second wave," said Aditi Nayar, Chief Economist with ICRA Ltd. 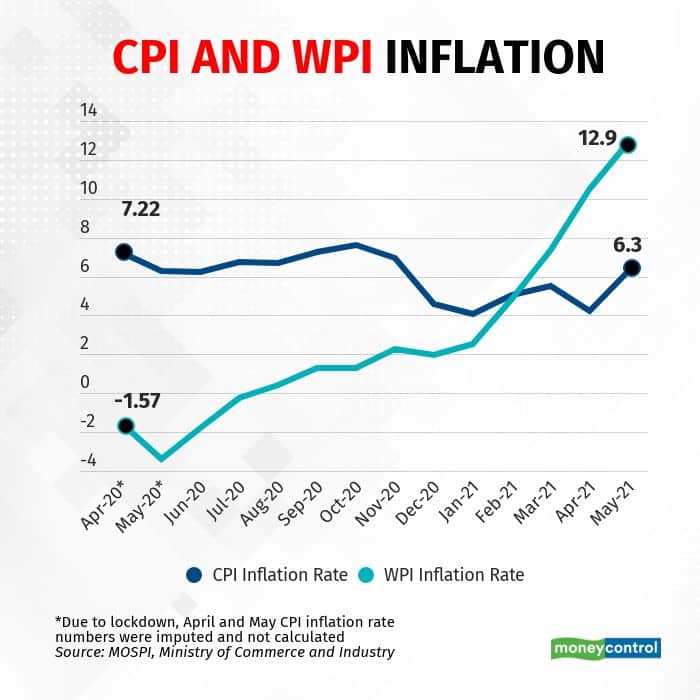 Nayar said that core-CPI inflation rose to an 83-month high 6.6 percent in May 2021, and is expected to remain above 5 percent throughout the fiscal year. "The phased unlocking of the states may temper the CPI inflation to around 6.0 per cent in the current month," she said.

Earlier in the day, data for Wholesale Price Index-based inflation was also released. WPI inflation touched 12.94 per cent in May, the highest on record, as the constant rise in the cost of fuel, including petrol, LPG and high-speed diesel percolated down into the economy and a low base effect pushed up figures.

"We had earlier indicated that if wholesale prices are rising then eventually it will start finding its reflection in the retail inflation as well," said Sunil Kumar Sinha, Principal Economist with India Ratings and Research.

"Although it is still too early to believe that retail inflation will remain in excess of 6 percent on a sustained basis given the high base of last year, we believe a rising wholesale inflation,  which is gradually finding a reflection in the retail inflation as well, is going to make things difficult for RBI," Sinha said.

Sinha added that given the growth inflation dynamics, the RBI may not be in a hurry to tinker with either the policy rate or its accommodative policy stance.

"We believe the MPC will demonstrate a high tolerance even if the average CPI inflation ranges between 5 percent and 6 percent in FY22, given the uncertainties regarding the growth outlook. Therefore, we continue to expect a status quo on the repo rate and a continuation of the accommodative stance through 2021," said ICRA's Nayar.

This wide gap between CPI and WPI inflation is expected and should not be a cause of concern, as per analysts. WPI has more weightage of non-food commodities and hence is impacted by a global rise in commodity prices. The weightage of food items is much more for CPI inflation.
Arup Roychoudhury
Tags: #CPI #Economy #inflation #retail inflation #WPI
first published: Jun 14, 2021 05:36 pm