A recent report by Centre for Monitoring Indian Economy (CMIE) showed that unemployment was rising, particularly in urban areas. Experts say Q1 FY22 will be a washout for recruitment, except for jobs in high-technology areas and data.

About 7.5 million jobs have been lost across sectors in February-May 2021, data compiled by Moneycontrol based on estimates of hiring consultants showed.

This is the worst-ever loss of jobs in India since liberalisation. The 2007-2009 financial crisis had a relatively smaller impact, with about 5 million jobs lost.

Jobs were lost across sectors such as travel/tourism and hospitality, which rely on people movement to sustain business, as well as startups and financial services.

Moneycontrol gives you a lowdown on which sectors suffered the most.

This sector has been badly hit. With the second wave, close to 4.2 million jobs have been lost in this sector, with travel agents and tour guides taking the biggest hit.

The sector was the worst hit even in the first wave because of the complete lockdown and ban on travel. It had started picking up pace from November 2020 when leisure travel had resumed but the second wave has derailed it again.

"Atleast 50 travel agencies have shut shop in the past one year. It is not possible to survive when there is so much uncertainty around. Some business picked up but again there is lockdown all around," said Bhushan Tiwari, consultant at BT Travels in Kolkata.

Tiwari said he had initially laid off 60 percent of his 120-member team. However, in December the firm re-hired 40 people and had to retrench 10 people in April 2021.

The World Travel and Tourism Council (WTCC) said in a recent report that the COVID-19 pandemic could cost the tourism industry a job loss of 50 million worldwide and revenue loss of USD 22 billion.

Lockdown-like restrictions and fear of travel or dining out has battered India’s $10 billion hospitality industry that employs 35 million people.

The Federation of Hotel & Restaurant Associations of India (FHRAI) said the hotel industry has taken a hit of over Rs 1.30 lakh crore in revenue for the fiscal year 2020-21 because of the pandemic.

Moneycontrol had reported earlier how job losses and pay cuts have come back to haunt the sector with the second wave of COVID-19. Reverse migration has occurred again and many workers have gone back to their home cities.

Analysis showed that 2.3 million jobs have been lost so far with small-scale eateries facing the biggest brunt of the pandemic.

After a brief take-off between October 2020 and January 2021, the retail sector that employs 7.5 million people is suffering again.

It is estimated that close to 1 million jobs have been lost across the sector including in high-street fashion, small stores and standalone units including malls.

Retailers Association of India (RAI) again urged the government to roll out relief measures for retailers, who have been reeling from the impact of the new set of restrictions.

This sector is relatively better off, as it is in the ‘essential services’ category.

Close to 18,000 jobs have been lost in the sector, mostly in sales.

"Apart from transactional banking, customers are staying away from products like gold loan, credit cards and other allied products. This means that those employed in these areas are liable to lose their jobs," said Jose Mathews, senior vice president at PayHire HR Consulting which specialises in BFSI sector roles. 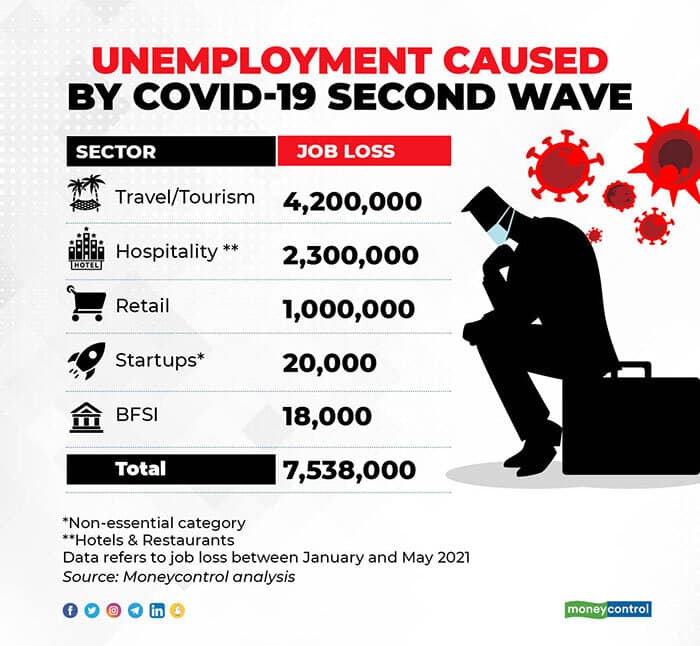 Authorities in major cities like Mumbai and Bengaluru are only allowing delivery of essential products such as grocery and medicines, not electronics and fashion accessories.

This led to job losses especially on the logistics and administrative roles. An added pinch that was faced was after the Ministry of Information Technology banned 59 mobile apps in June 2020, saying they are engaged in activities "prejudicial to the sovereignty and integrity of India, defence of India, security of state and public order.

These included TikTok, Shein, UCBrowser, Vigo Video, Cam Scanner and Club Factory among others. This led to job losses across these companies after a wait for a few months of decision appeal.

Overall, 20,000 jobs are said to be lost in startups especially in the non-essential category of video blogs, online shopping and fashion accessories.

"Initially, startups didn't start firing people. The expectation was that the Indian government will offer some relaxation and hence all these app-companies were holding on to staff. But by February 2021 it was clear that the decision wouldn't be repealed and employees had to be laid off," said Sumanth Krishnan, CEO, BlueChip HR Solutions which specialises in employment for startups.

Is there a revival in sight?

Hiring consultants are of the view that Q1FY22 will continue to be a washout period for recruitment activity. New job offers will be restricted to purely high-technology (especially cybersecurity) and data roles involving backend data mapping or storage.

A Reuters poll showed that the job crisis in India is set to worsen with 85 percent of the respondents stating that the risks are high.

Once the vaccination drive accelerates, helped by new vaccines to be available  in India, states are expected to start  relaxing various restrictions. Employment will revive only then.

M Saraswathy is a business journalist with 10 years of reporting experience. Based in Mumbai, she covers consumer durables, insurance, education and human resources beat for Moneycontrol.
Tags: #Business #Economy #HR #jobs
first published: May 28, 2021 11:11 am