Upcoming Webinar:Join us for 'The Future Techshot' on Sept 22, 10:30am to gain insights into role of tech in streamlining businesses. Register Now!
you are here: HomeNewsBusinessEarnings

Despite having infused Rs 650 crore as capital so far, the current performance of the housing finance subsidiary continues to be weak with non-meaningful contribution to the group

Motilal Oswal | CMD, Motilal Oswal Group | This is a new beginning not only for the markets but for the whole country. India is on the way to be a superpower leading the world. (Image: Moneycontrol)

In an effort to reduce its dependence on the capital markets, the management ventured into housing finance through Aspire. The latter focusses on affordable housing segment and caters mostly to self-employed customers with an average ticket size of Rs 9 lakh. Despite having infused Rs 650 crore as capital so far, performance of the housing finance subsidiary continues to be weak and non-meaningful to the group.

However, the strategic decision to enter the housing space will yield results in the long run. The diversification will help MOFS mitigate cyclicality in capital market-related earnings. Given that most of MOFS' businesses are fee-based and has limited incremental capital requirements, the housing finance business provides an avenue to deploy excess capital for creating long term value.

In Q1, broking and distribution revenue and profit grew 22 percent and 120 percent YoY to Rs 303.6 core and Rs 56 crore, respectively, aided by strong volume growth and operating leverage. The performance was slightly negated by slowdown in capital market related activity as reflected by a decline in profit in investment banking by 57 percent to Rs 7 crore.

The most important reading from this segment is the increase in earnings before interest, tax, depreciation and amortization (EBITDA) margin to 37 percent in Q1 as compared to 29 percent last year. The increase was on account of better operating leverage on higher growth in fee income through distribution of financial products. The incremental cost of distribution is limited as it is a cross-selling opportunity to broking clients. Hence, we expect high EBITDA margin to sustain in this segment.

Distribution income currently contributes around 17 percent of total retail revenue. So, margin can improve further as there is significant scope for increase in distribution AUM through cross-selling.

MOFS enjoys strong market position in retail and institutional equity broking and is among the top five brokers in India. However, the broking segment is highly volatile and future growth can be adversely impacted by rising trend of retail investors preferring mutual funds over direct equity investments. We see this risk to be mitigated to some extent as the company has ramped up its retail distribution business. 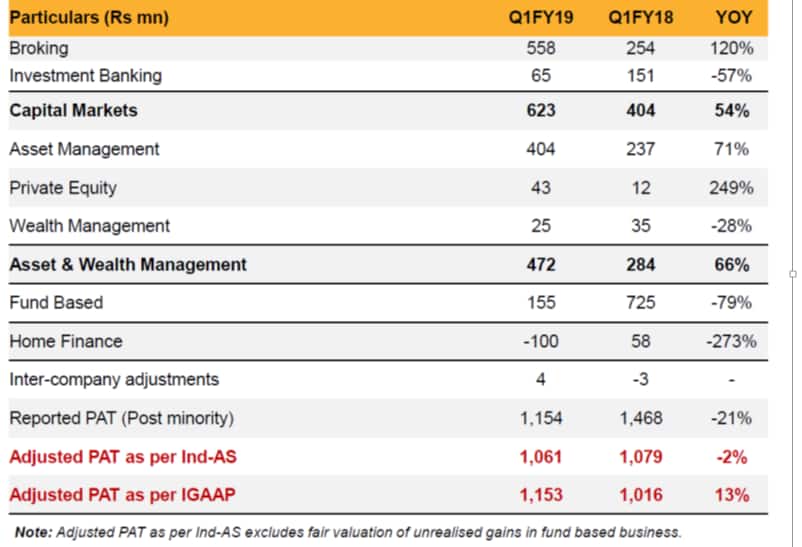 The company reported healthy growth in assets managed under mutual funds, portfolio management services (PMS) and alternative investment fund, with AUM increasing to Rs 37,600 crore as at June-end, a growth of 55 percent YoY. As a result, the asset management segment reported robust numbers, with revenue and net profit increasing 40 percent and 71 percent in Q1.

We are enthused about certain aspects of its AMC business. First, it has positioned itself as an equity specialist. Hence, almost its entire AUM consists of high fee earning equity assets unlike the industry which has more than 50 percent of low yielding debt and liquid assets. Second, 51 percent of its AUM consists of non- mutual fund assets (PMS and AIF), where fees can be higher and driven by performance fees. At present, only 20 percent of non-mutual fund AUM is performance fee linked, but has improved as compared to 14 percent in June last year.

Wealth management impacted by high cost incurred for expansion
Despite wealth management AUM increasing 35 percent YoY to Rs 15,300 crore, net profit declined 28 percent YoY. This is mainly attributed to 80 percent increase in operating cost as MOFS continues to hire relationship managers to grow this business. The increase in vintage of existing relationship managers will aid assets growth and drive future operating leverage.Asset quality pain continues in Aspire
Aspire reported a loss of Rs 10 crore as provisions on bad loans almost doubled. Asset quality continued to deteriorate with gross non-performing assets increasing to 6.8 percent as at June-end as compared to 4.5 percent last quarter. Due to transition to IndAS, Aspire declared stage 3 assets, around 7 percent of its loan portfolio. Consequently, a significant increase in provisions and write-offs led to it reporting a loss in Q1 FY19. Also, Aspire’s net worth declined around 4 percent due to transition to IndAS.

The fall in asset quality is in line with management guidance and will continue for another quarter or so. While the company is taking necessary corrective measures and increasing efforts on the collection front, we remain cautious. The management expects provisioning cost to stabilise in the second half of FY19. However, we see reported numbers improving meaningfully from FY20 onwards.

Gradual diversification in MOFS’ revenues, supported by the growth in fee-based businesses such as asset and wealth management and foray into housing finance is encouraging. Some of these businesses have scaled up well over the last few years. However, overall performance is dragged down by the housing finance subsidiary.

After a dream run till December last year, the stock has corrected almost 45 percent from its 52-week high price in January. The deterioration in housing finance was the key catalyst for the correction in stock price in addition to market factors. As such, valuation has turned reasonable with the stock trading at 21.8 times FY19 estimated earnings and pricing in concerns in the housing business.

However, we don’t see a quick pullback in the stock price as asset quality concerns in housing book will continue to linger for at least the next couple of quarters. We expect FY19 to remain a year of consolidation and reported numbers to improve meaningfully from FY20. Given the franchisee’s strength and future growth levers, long term investors with appetite for some volatility can look to accumulate the stock.