BSE Midcap from its June low advanced 19 percent, while BSE Smallcap climbed 20.04 percent, outperforming Sensex and Nifty which gained 15 percent each since

BSE Midcap and Smallcap indices have surged nearly 20 percent each from its June low amid correction in commodities, better macro data and healthy monsoon. 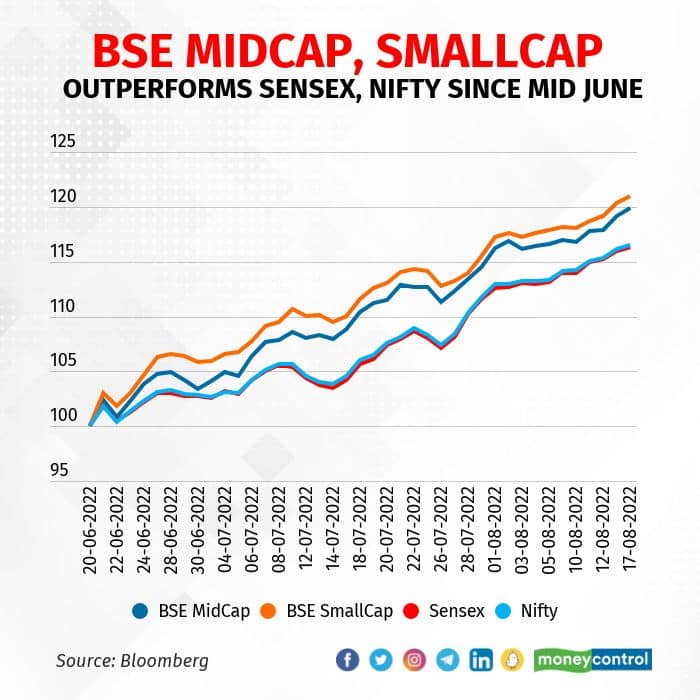 "This outperformance was largely on the back of attractive valuations, inflow of FII money and earnings being far better than expectations... Apart from these, macro data points that India has continued to be robust, despite mixed global cues, thus supporting a reversal in the market trend. Healthy monsoon too lent support and led to hope of rural demand revival," said Sneha Poddar, AVP Research, Broking and Distribution, at Motilal Oswal Financial Services.

There have been no significant disappointments in quarterly earnings so far and many firms have reported better-than-expected numbers. Investors were anticipating muted earnings growth amid input cost pressure. But the results of many steel, cement, and consumer companies have not disappointed much and have, in some cases, beat expectations, helped by volume growth and better realisations.

India's consumer inflation dipped to 6.71 percent in July, helped by a slower increase in food and fuel prices. The US CPI inflation was at 8.5 percent in the year through July, below Bloomberg estimates of 8.7 percent. Investors are now expecting inflation to have peaked and the Fed to slow down the pace of rate hikes in the coming months.

Analysts say historically midcaps, smallcaps and high-beta stocks outperformed when Sensex and Nifty and underperformed. Further, lower commodity and oil prices supported midcaps stocks which corrected more during the downfall. Smallcaps and midcaps have higher sensitivity to cost inflation on their earnings. Recent corrections in commodities would lead to better earnings going ahead for these companies driving the stock performance, they believe.

"We expect outperformance of midcaps and smallcaps to continue with strong economic rebound, normalised commodity prices, inflation within targeted range and better visibility expected by second half of FY23. FII investment has started in the past few weeks and is likely to continue in the midcap and smallcap stocks," said Mitul Shah, Head of Research at Reliance Securities.

According to Vinod Nair, Head of Research at Geojit Financial Services,  the trend is expected to continue due to a slowdown in the global economy and an increase in global supply.

Analysts expect that with inflation peaking out, midcaps and smallcaps will continue with their rally as the impact of inflation was much severe for them which led to sharper hammering in them. The upcoming festive season could also spurt demand and thus boost corporate earnings, they added.

Midcaps and smallcaps fell 24 percent and 26 percent from their highs in October, while the Sensex and the Nifty lost 17 percent each due to global concerns and record high inflation.
Ravindra Sonavane
Tags: #Commodities #earnings #inflation #Midcap #RBI #Sensex and Nifty #Smallcap #US Federal Reserve
first published: Aug 17, 2022 09:53 am