Few marques come with the sort of provenance that Land Rover does. Not because the brand essentially created the luxury SUV space with the Range Rover; not because it is a symbol of old money in a way few brands can hope to be. For Britain’s legendary carmaker, it all started with the Series I, born in 1948 before being rechristened the Defender and going on to become one of the most capable off-roading vehicles ever made.

Unlike the Range Rover and its subsequent antecedents, the Defender never lost its bare-bones, mechanical appeal. It went on to receive timely upgrades to its drivetrain, but the fundamental principle behind it remained unchanged: it was meant to go where other cars couldn’t.

The news of its discontinuation in 2016 came as a shock to many. As one of the few automotive sub-brands to remain in continuous production, the Defender possessed the sort of iconic appeal and purity of purpose, only found in the likes of the Porsche 911. It was an off-roading tool that was constantly being improved, until it ceased to be. Then word got around that Land Rover were working on an all-new Defender, with Jaguar Land Rover design chief Gerry McGovern at the helm. Understandably, anticipation levels have remained high, ever since. And with the brand keeping things pretty close to the chest, not much was known about it. Until now.

So what does the new Defender have to offer that the old one didn’t?

A lot more than nostalgia

The Indian market gets both the full-sized, five-door 110 (One-Ten) and the three-door ’90’ version, the latter arriving early next year. Both versions, in terms of design, borrow heavily from their ancestor but manage to retain a fundamentally modern vibe. Hardcore Defender enthusiasts – a community of considerable heft – need the vehicle to be as closely linked to the former versions, as possible, but Land Rover has the unenviable task of making it appeal to modern customers. Which means that while the former Defender was only tasked with having to be a truly formidable off-road machine, the new one has to do that, while also being viable as a road car. Given how far Land Rover has come in the world of automotive luxury, the Defender must perform a tight-rope act requiring it to be all things to all people. Something even the Jeep Wrangler has failed to do.

The technology is truly bonkers

As impressive as the Defender is to behold, it’s really what’s underneath its skin, that makes it such a revolutionary product. While we only get a 2.0-litre petrol engine for the moment, Land Rover might bring in the straight six, in the distant future.

Electronic air suspension comes as standard, with the adjustable ride height giving it the sort of long suspension travel it needs during its water wading (into depths upto 900mm) and boulder-bashing endeavours, while also allowing it to be lower and more agile on the tarmac. This should also give it the ability to absorb our uneven road surfaces better than most soft-roaders in the market. 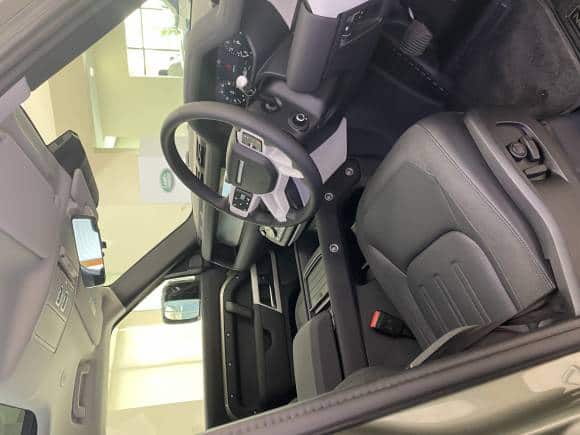 Step inside and a remarkably simple and inviting cockpit awaits. It’s endearingly faux military and a refreshing change of pace from the modern crop of SUVs doing their best impression of a Georgian villa. The Defender’s cabin is roomy and deliciously ergonomic. Through a simple, 10-inch touchscreen interface one can easily access the absolutely stunning array of tech on offer. Jeep might have the hardware, and may even beat Land Rover on the pedigree front, but no one does off-roading software quite like Land Rover.

If you thought the Range Rover’s ability to detect surfaces was impressive, wait till you operate Land Rover’s patented Terrain Response System on the Defender. Everything from entry and departure angles (which vary depending on which driving mode you’ve selected, due to change in ride height) are visible on-screen.

The Defender also has underbody cameras in six different spots, giving you a comprehensive view of the surface you’re tackling, and thereby allowing for perfect off-road wheel articulation. In off-road mode, the air suspension rises to give you 291mm of ground clearance.

The Terrain Response system on the new Defender, allows you to configure the car just the way you want it. You can set it in ‘Automatic’ mode, where the diffs, suspension etc, will all be based on the terrain detected by the vehicle, or, for the true Defender aficionado, you have the option of configuring it manually.

There’s an electronic active differential constantly monitoring power transferred to each wheel, reducing wheel-spin and aiding cornering. You can even monitor your energy consumption, as the car gauges your driving style based on your throttle inputs, to show you just where you’re losing fuel and energy in general. All of this will be reflected in your ‘Driving Score’.

There’s also an electronically deployed ‘tow bar’ that pops out from the back, and goes right back in through a gentle tap on the 4K touchscreen. That and a full-sized, tailgate-mounted spare and a proper roof rack, round up what the Defender has to offer.

Get inside one and you’ll find yourself compelled to seek out big adventures. Because from the looks of it, the new Defender will continue to be your lifeline in the harshest terrains across the world.

Parth Charan is a Mumbai-based writer who’s written extensively on cars for over seven years.