Should the Hyundai Creta be worried?

The Grand Vitara pulls off a balancing act between on-road comfort and off-roading ability that none of its rivals can hope to match.

The Maruti Suzuki Grand Vitara is a momentous launch for India’s largest carmaker for various reasons. For starters, it marks the brand’s re-entry into the SUV space, at least at a locally manufactured level, after ages. To put things in context, the last time Maruti Suzuki made a 4x4 capable SUV, they slapped a Gypsy badge on it. The SUV space has moved leaps and bounds since then, benefitting immensely from the offerings of Maruti Suzuki’s chief competitors. It had to enter the SUV space sooner than later, but how would it contend with the likes of the Hyundai Creta, the Kia Seltos and even the Volkswagen Taigun, all of which have a considerable performative lead over Maruti Suzuki?

The answer is: hybrids. The new Grand Vitara is Maruti Suzuki’s first strong-hybrid offering in the country. A feat it has accomplished through an alliance with Toyota – arguably the biggest name in the world when it comes to hybrid technology. Leaning on efficiency and off-roading abilities rather than outright power, Maruti Suzuki is hoping the aforementioned attributes prove to be potent enough differentiators to disrupt the mid-size, 5-seater SUV segment. Having received 57k bookings upon launch, the formula seems to be working. So, what’s the new Grand Vitara all about?

Much like its identical twin, the Toyota Hyryder, the Maruti Suzuki Grand Vitara comes with two powertrains, a 1.5-litre naturally-aspirated, 4-cylinder petrol engine featuring a starter generator that qualifies it as a mild-hybrid. It makes 101 bhp and comes with a 5-speed manual or a 6-speed automatic gearbox. There’s also an AWD variant, which comes with a manual gearbox only, yet, despite its immense capabilities, it isn’t the star attraction here. That would be the strong-hybrid, or the self-charging hybrid which is essentially a 1.5-litre, 3-cylinder, naturally-aspirated petrol paired to a 0.7kWh lithium-ion battery. The hybrid version of course, being utility focussed comes with an e-CVT gearbox, with no manual option available. Now that we’re done with the specs, let’s talk about what this car gets right.

No tech left behind

Step inside either variant of the Grand Vitara (they’re nearly impossible to tell apart, other than through gear levers) and you’re bound to do a double take. This is clearly the most plush any Maruti Suzuki car has ever looked. Leatherette-wrapped steering, ventilated seats, hill hold, a 360-degree camera, paddle shifters and a 9.0-inch touchscreen centre console, the top-end versions on both (Alpha and above) get a wide variety of features. The Hybrid also gets a heads-up-display unit, while both cars get 6 airbags as optional. At Rs 17.99 lakh (for the Hybrid) it’s a lot to shell out for a car bearing the Maruti Suzuki badge, but the brand has certainly risen to the challenge of making this the most premium offering to come out of the Nexa sub brand. 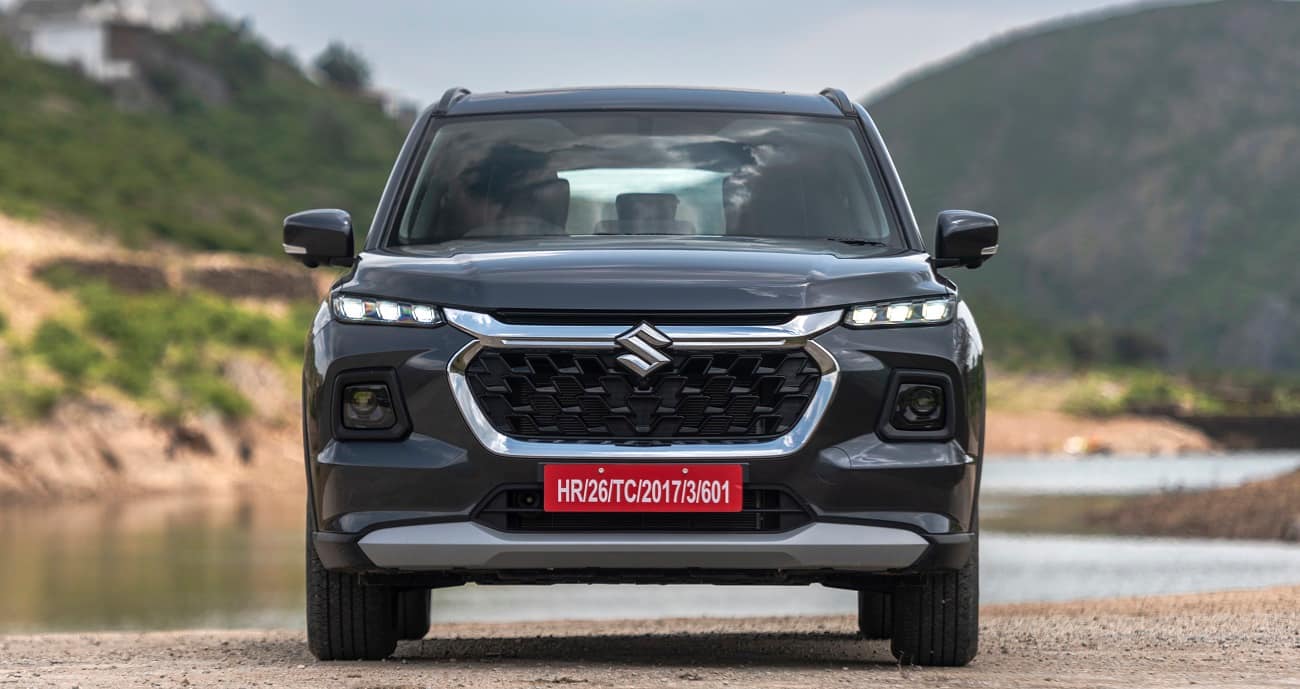 I know what you’re thinking. The true successor to the formidable Gypsy is the soon-to-arrive Jimny. But the Grand Vitara truly took me by surprise at just how adept it is wading through truly tricky terrain. Maruti Suzuki knew this, and so, set up a proper off-roading course. The division of labour is clearly marked out between the non-hybrid and hybrid version, with only the former getting a 4x4 system while the latter is more road and efficiency focussed. The AWD version, courtesy Maruti Suzuki’s proprietary “All Grip” system, gets multiple terrain modes, including a Land Rover-esque auto mode which automatically calibrates which wheel to send power to, based on available traction, keeping the vehicle in front-wheel drive for the most part, with 4WD kicking-in when necessary.

This is of course done keeping in mind fuel efficiency. For hardcore off-roaders though, there is a lock function, which fixes the power split 50:50 (front/rear) and allows the Vitara to wade through pretty much anything. A Hill Hold function, which can be toggled via a button allows for easy descent and ascent from and towards steep crests. Of course, all of this was put to the test, on an off-road course where it became evident that the Grand Vitara’s entry and departure angles had been designed keeping steep ditches in mind. Without wallowing on road like a ladder-frame off-roader, the Grand Vitara pulls off a balancing act between on-road comfort and off-roading ability that none of its rivals can hope to match.

To begin with, the 1.5-litre four-cylinder DualJet petrol, which does duties on the Brezza as well, feels positively asthamatic here. Devoid of the punch that the turbo-petrol options on the competition offer, the mild-hybrid, especially with a 6-speed automatic underwhelms almost instantly. It’s good if you wish to trundle along in city traffic, in which case you will miss the hybrid’s efficiency. But in any other scenario, it feels remarkably underpowered, even if you switch to paddle shifting. Operate the gearbox manually and the Vitara struggles to find power, groaning its way to uphill roads in a manner we are no longer accustomed to. If it’s the petrol-only version you’re keen on - stick to the AWD manual, which comes with great off-roading abilities and a performance mode, which allows you to milk every one of those 101 horses. Then there’s the fact that you will be compromising on boot space, if opting for the hybrid. Instead of placing the battery under the seat, Maruti Suzuki has chosen to place it in the boot. While this actually enhances the car’s ride quality, making it less bumpy at the rear when driving over broken roads, it does eat away into the boot space leaving you with only 255 litres.

This is where Toyota’s mastery over hybrid tech comes to the Vitara’s rescue. Thanks to the supplementary power provided by the 0.7kWh battery, the Vitara, now making 114 bhp feels noticeably brisker. This despite having a very frugal eCVT without any paddle shifters to help you find the meaty bit of the powerband. Maruti Suzuki claims that the Grand Vitara is the most efficient SUV in the segment giving 27kpl. This is of course, the ARAI-tested figure, but it wouldn’t be a stretch to say that the Grand Vitara, through judicious use of its EV mode, can give you upwards of 20kpl in the city. Unlike former hybrids made by Toyota which featured NiMh batteries, the lithium-ion unit can take on all the drudgery of your daily commute. It’s supposed to coast on EV mode all the way up to 120kph, but having pedalled to the floor, the petrol motor kicked-in post 50kph. There’s also a better way to recuperate energy via regenerative braking, which can be kicked up a notch by slotting into “B”.

It’s impossible for the Grand Vitara’s rivals to discount the threat it poses to their existence. And that’s because the Grand Vitara is a result of two automotive giants combining forces to take on India’s most competitive automotive segment. And boy, have they delivered. The Grand Vitara could very well be the cure to Maruti’s recent sales woes. A resounding return to the trenches of SUV-land, the Grand Vitara is equipped with the right looks, the right powertrains and the right set of abilities to topple the mid-size SUV hierarchy. 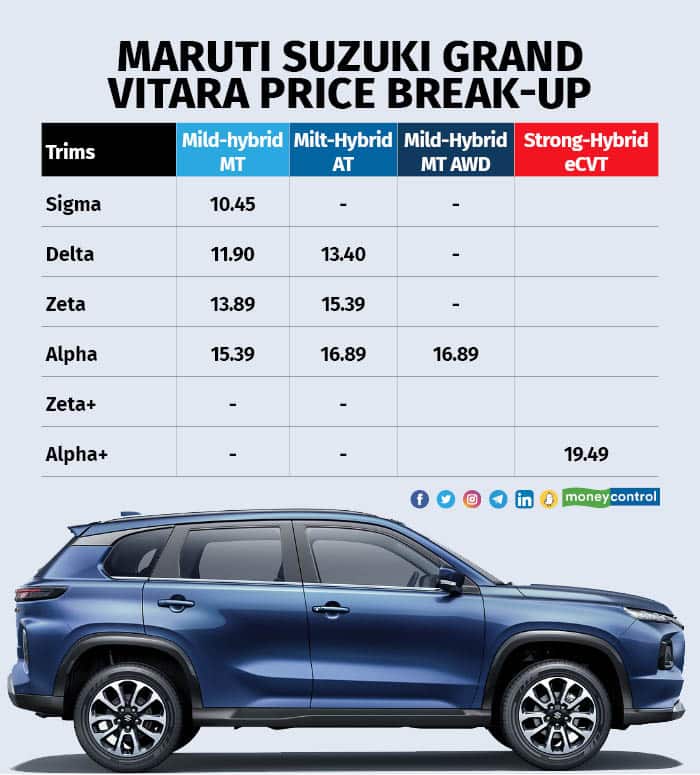