Maruti Suzuki, which commands the lion’s share of the domestic passenger-vehicle market, derived just 5.8% of its total sales from Compressed Natural Gas (CNG)-powered vehicles in FY 2017.  Five years on, one out of every five vehicles (20%) the company sells now runs on CNG. At present, the company has nine CNG variants of its existing Internal Combustion Engine (ICE) models and is exploring more options.

Indeed, the passenger vehicle industry as a whole is witnessing an upward trajectory in CNG-powered vehicle sales. Auto industry body SIAM had earlier revealed that the total number of CNG passenger vehicle sales stood at 265,383 units in FY 2022, 54 percent more than the 171,288 units sold in the previous fiscal year. CNG-fired vehicles accounted for 8.6 percent of total PV industry volumes in FY22 as against 6.3 percent in the previous fiscal, per SIAM.

While the government’s thrust on e-mobility continues at full throttle, sales of CNG-powered vehicles are also clearly on the upswing, despite not being subsidized by the government. Industry players reckon that while lower ownership costs continue to be the key driver, improvement in performance of gas vis-à-vis fossil fuel variants, and the wider presence of dispensing stations, have boosted the volumes of CNG-fuelled products. 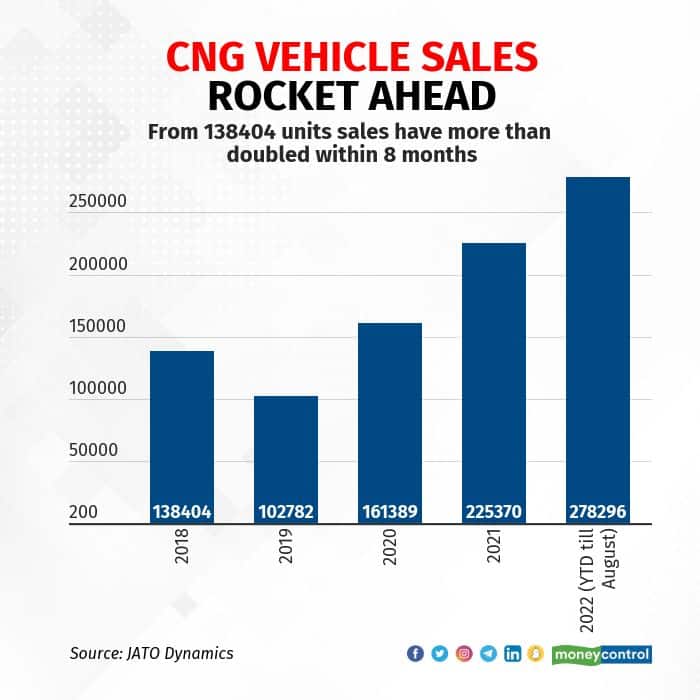 According to JATO Dynamics, an auto data intelligence firm, sales of CNG-powered vehicles have nearly doubled from 138,404 units in Calendar Year 2018 to 278,296 units in 2022 (as of August). To boost sales further, there will be rollouts of CNG variants of the Maruti Suzuki AltoK10 and Brezza, Hyundai I20, Honda Amaze, Tata Punch, Altroz, etc, says JATO Dynamics. However, when Moneycontrol reached out to these companies independently, none of them confirmed or denied the rollout of these products.

Interestingly, gas-run vehicle sales have remained unaffected despite multiple rounds of price hikes over the last 12 months and irrespective of excise duty cuts in petrol and diesel prices. This is because, as industry observers claim, entry-level car buyers continue to factor in the total running cost, which is still lower in vehicles with CNG options.

“Stringent Corporate Average Fuel Economy (CAFE) norms and deadlines and the likely penalty for not complying with fuel efficiency and carbon emission targets will drive growth of CNG vehicles. Furthermore, improved availability of models and a better CNG network have given a further boost to CNG-powered vehicle sales,” Ravi Bhatia, President, JATO Dynamics, told Moneycontrol. He added that the only dampener would be recurrent price hikes, which can narrow the gap between gas and gasoline.

How companies view the opportunity

As Shashank Srivastava, senior executive director (marketing and sales), Maruti Suzuki, puts it, “The recent high fuel prices of gasoline and diesel had led to a huge increase in running costs.”  As per his calculation, a CNG vehicle’s running cost is around Rs 2.6/km and that compares favourably with Rs 5.1/km for gasoline/diesel, which has led to a spike in demand for CNG vehicles in the last few years.

“While the recent sharp increase in CNG prices has narrowed the running cost gap somewhat, it is still substantial. Logically this should lead to some slackening of demand for CNG cars, but due to the high level of pending bookings, this phenomena is not immediately visible,” stated Srivastava. Hyundai Motor India, which sells two CNG options for the Grand i10 NIOS and Aura, has improved its monthly numbers for these products from 4,500 units earlier to 5,500 units now.

“Very clearly the numbers are going up because dispensing stations and CNG give a lot of value to customers, especially entry-level ones, because fuel efficiency is 30% more. So, demand is robust. At the same time, there are also challenges, because prices of CNG have gone up, so some customers have shifted to petrol,” said Tarun Garg, director of sales, marketing and services at Hyundai Motor India.

Tata Motors, which currently sells CNG versions of the Tiago and Tigor, is also looking to expand its offerings in the CNG space in the next few quarters.

“With the rising cost of petrol and diesel and the increasing necessity for alternative fuel-run cars, the CNG segment has started witnessing a massive surge in demand. Our iCNG range of products contributes 10% of our total product portfolio. We are now actively looking at rolling out more CNG-powered models in the near term,” said Shailesh Chandra, managing director, passenger vehicles and electric mobility, Tata Motors.​