Based in the hometown of Confucius, Chairman Qiu Yafu spent more than $3 billion snapping up assets from the boulevards of Paris to the heart of London tailoring on Savile Row.

Based in the hometown of Confucius, Chairman Qiu Yafu spent more than $3 billion snapping up assets from the boulevards of Paris to the heart of London tailoring on Savile Row. He bought French fashion brands Sandro and Maje, as well as heritage UK trenchcoat maker Aquascutum and the maker of Lycra stretchy fabrics. Those big dreams have since unraveled, and Ruyi is at the center of a messy unwinding involving some of the world’s largest financial institutions. 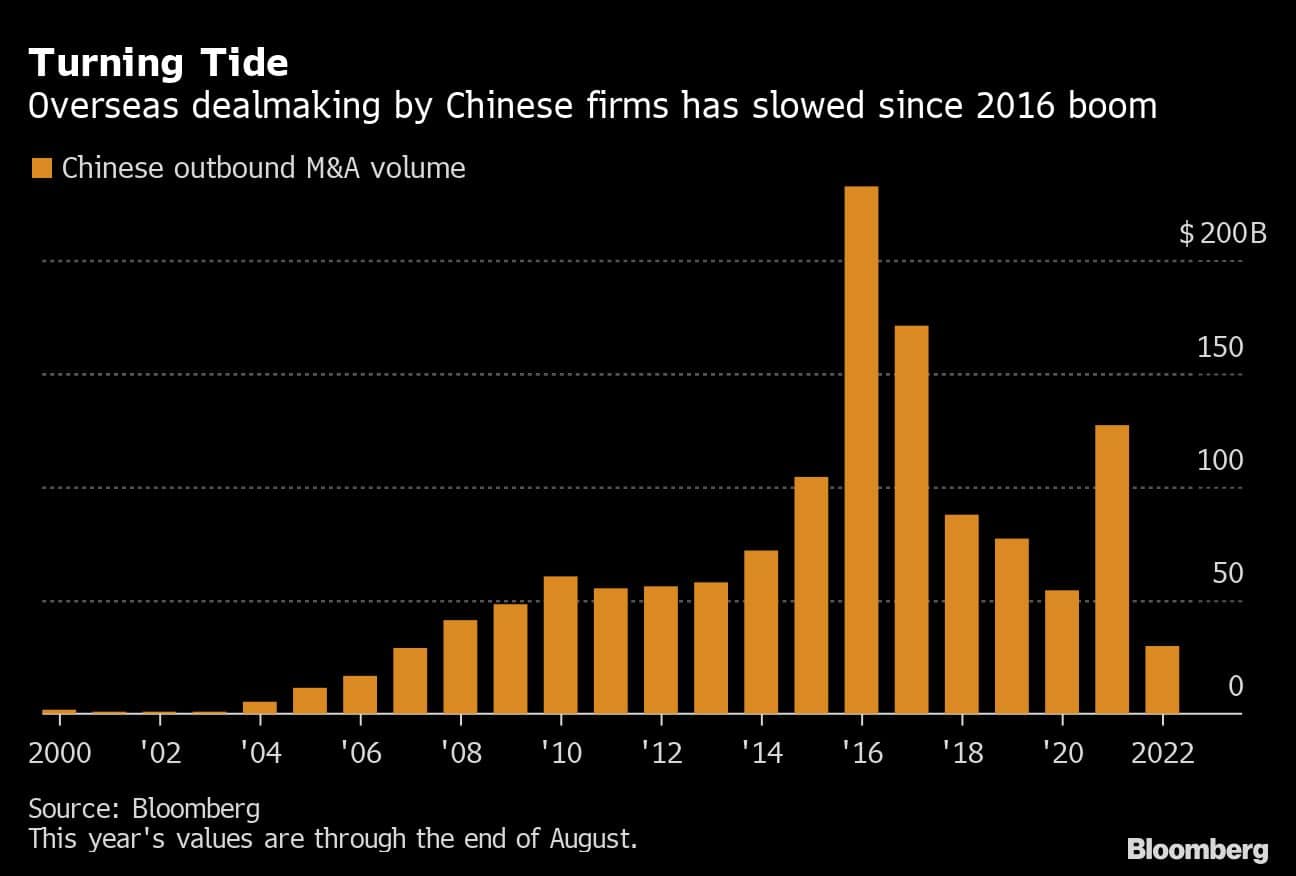 Ruyi is now losing control of key businesses and locked in disputes with creditors including Carlyle Group Inc. In June, lenders took over Wilmington, Delaware-based Lycra Co., the spandex producer Ruyi had bought from the billionaire Koch brothers. The next month, liquidators for another arm of Ruyi started inviting bids for Gieves & Hawkes, the bespoke tailor that’s dressed every British monarch since George III. Court decisions in the coming months could decide the fate of other assets.

The rise of Ruyi came amid a $400 billion outbound deal wave from China as the government sought to build up global champions. Authorities were encouraging traditional manufacturers to move up the value chain and help build a consumption-driven economy. Ruyi is now trying to offload assets in a difficult market, joining Chinese conglomerates like HNA Group Co. and Anbang Insurance Group Co. that have been reversing their global deal sprees.

“Most of the acquisitions made by Chinese companies overseas in recent years have not been successful,” said Jeffrey Wang, co-head of the Shanghai office at investment banking firm BDA Partners. “The lengthy unwinding of Chinese companies is continuing for so long because they cannot afford to sell those assets at a big loss now.”

Qiu, a 64-year-old former factory worker, has been holed up in a Hong Kong hotel room the past few months negotiating with creditors, according to people with knowledge of the matter. He’s trying to hold onto portions of his international empire, which also includes the Italian-inspired Cerruti 1881 label and British menswear retailer Kent & Curwen.

A Ruyi representative said that the companies it acquired were strategic investments and it worked hard to improve their performance, using local teams to manage the overseas operations.

“We weren’t out there making irrelevant acquisitions for the sake of winning trophy assets,” the Ruyi representative said. “It’s just very unfortunate that the Covid-19 pandemic, coupled with the Sino-US tension and tighter credit environment, had hit us badly.”

At first, Ruyi’s strategy seemed like a sure winner. Increasingly affluent Chinese shoppers were flocking to European luxury goods, so Ruyi would snap up foreign brands that had neglected the Chinese market—and bring them closer to where the demand was. After buying a majority stake in French fashion group SMCP SA from KKR & Co. in 2016, Ruyi helped it build up a network of more than 100 stores in the glittering malls of booming cities like Shanghai and Beijing.

It listed SMCP on the Paris bourse the next year, a success that gave Ruyi confidence to do more acquisitions. Qiu became fond of quoting a proverb about “sailing with the wind,” which some listeners understood as a reference to taking full advantage of the favorable dealmaking environment.

Ruyi tapped abundant financing from banks including JPMorgan Chase & Co. and Barclays Plc, making acquisitions that gave it thousands of new employees in North America and Europe and advanced facilities churning out products like Thermolite insulation. It even brought one of its favorite investment bankers in-house as it ramped up the hunt for targets.

In 2018, Qiu publicly declared his goal of turning Ruyi into China’s LVMH, and the company started being floated as a likely buyer whenever a Western consumer business went on the block. It suddenly seemed a long way from Ruyi’s humble past exporting wool fabric to developing countries.

Qiu regaled social media followers with business lessons from the ancient Chinese board game of Go, like the importance of pursuing balance and harmony over outright victory, and the way a keen rival can bring out your best performance. He dared other Chinese manufacturers to join him in casting off a reputation for low quality by strengthening their own brands.

One investor who visited the company’s headquarters during that period remembers being impressed by upmarket decor you’d expect more in a global capital than a smaller provincial city in eastern China. Executives waxed expansive about their international plans. But that ambition wasn’t enough to revive brands whose star had already started to fade.

Ruyi had trouble reenergizing Gieves & Hawkes, which was already struggling from rising costs and a stagnating market, according to Richard Hyman, a partner at retail-focused advisory firm Thought Provoking Consulting. And turning around labels like Aquascutum that peaked “many, many years ago” takes a good plan coupled with a lot of money and patience, he said.

“Brands under the Shandong Ruyi umbrella have faced pressure from multiple angles in recent years, not only from the company’s financial struggles, but also due to deflated demand for formalwear,” said Darcey Jupp, an analyst at London-based research firm GlobalData Plc. “Traditional formalwear brands that failed to react and casualize their ranges have inevitably fallen behind.”

Then last year, a trustee seized a large stake in SMCP on behalf of creditors—which include Carlyle, New York-based BlackRock Inc. and Anchorage Capital Group—after the Chinese group defaulted on some exchangeable bonds. The trustee has since been facing off with Ruyi in court cases in England, Luxembourg, France and Singapore.

Among other things, it’s been seeking to open bankruptcy proceedings against the vehicle holding Ruyi’s stake in SMCP. It appealed after a first attempt was rejected by the Luxembourg Commercial Court and is expecting a decision by the end of this year, according to a person with knowledge of the matter.

For its part, Ruyi has argued in UK court filings that Carlyle worked to force it into a position where it could gain control of SMCP shares. In May, a judge refused a request from Ruyi seeking documents it wanted to pursue the claims against Carlyle.

Representatives for Anchorage, BlackRock, Carlyle, Ruyi, SMCP and the bond trustee, Glas SAS, declined to comment on the court cases.

A slew of Chinese groups pursued rapid overseas expansion during the same period as Ruyi, hoping to replicate past successes like Shuanghui International Holdings Ltd.’s purchase of American pork producer Smithfield Foods Inc. The pace of deals has since slowed to a trickle, and the promise of the massive Chinese consumer market wasn’t enough to save some of the takeovers sealed during those heady days.

Chinese suitors used to be welcomed in bidding processes as they would push up valuations, according to Alicia Garcia Herrero, chief Asia Pacific economist at Natixis SA. Some of those takeovers ended up being hindered by the Chinese buyers’ lack of overseas experience, and the volume of outbound deals from the country is set to fall in the medium term, she said.

“The Chinese acquirers have underestimated the difficulties in post-deal integration,” Garcia Herrero said. “The cultural clashes were beyond their expectations.”

Ruyi is now focused on deleveraging rather than expansion, the company representative said. International funds are stepping in to buy its prized assets.

Macquarie Group Ltd.’s asset management arm earlier this year acquired the Chinese group’s controlling stake in Cubbie Station, owner of the biggest cotton farm in Australia. Various buyout firms have also studied a takeover of SMCP since Ruyi’s troubles began, though some were turned off by its complex financing structure, a person with knowledge of the matter said.

“The Chinese firms wanted to grow too quickly, too soon,” said Naaguesh Appadu, a research fellow at City University of London’s Bayes Business School who studies cross-border dealmaking. “Some of them have started out quite leveraged and as they kept adding on more debt, it became unsustainable to carry on.”
Bloomberg
Tags: #China #LVMH #tycoon #World News
first published: Sep 20, 2022 07:23 am