Live: Live | Is DMart's Aggressiveness Good For The Stock?
you are here: HomeNewsWorld

The country should achieve “the best outcome” possible for economic growth this year while sticking to a strict Covid Zero policy, according to a statement after a meeting of the Politburo, which is the Communist Party’s top decision-making body.

China’s top leadership gave a downbeat assessment of economic growth but didn’t announce new stimulus policies at a key meeting, calling on officials to ensure that housing projects are completed following a wave of mortgage boycotts.

The country should achieve “the best outcome” possible for economic growth this year while sticking to a strict Covid Zero policy, according to a statement after a meeting of the Politburo, which is the Communist Party’s top decision-making body. The leadership urged efforts be made to stabilize employment and prices to keep the economy running in a “reasonable range.”

There was no mention of the national economic goals as there was at the April meeting, suggesting the government is downplaying the target of “around 5.5%” growth for this year that most economists think is impossible after a slump last quarter. However, provinces that are in a strong position were encouraged to strive to meet their individual targets. “Beijing is suggesting that GDP growth targets for provinces with less favorable conditions, especially for those that were hard hit by the omicron variant and lockdowns, could be more flexible,” Nomura Holdings Inc analysts led by Lu Ting wrote in a research note. “Large provincial economies were also encouraged to take the lead in supporting the economy.”

The government will take measures to boost demand, with liquidity to be maintained at “reasonably ample” levels and credit support for companies to be enhanced, according to the meeting which was led by President Xi Jinping. Local governments will be supported to make full use of the special bond quota, it added.

“The focus will not be on launching new stimulus but on implementing the existing policies and letting them take effect,” said Bruce Pang, chief economist and head of research at Jones Lang Lasalle Inc.

The Politburo made clear that local governments will be responsible for ensuring the delivery of housing projects, according to the statement. The comment came as concerns mount over the risks of a property crisis spreading to the broader financial system after hundreds of thousands of homebuyers refused to pay mortgages on apartments where construction has stalled. 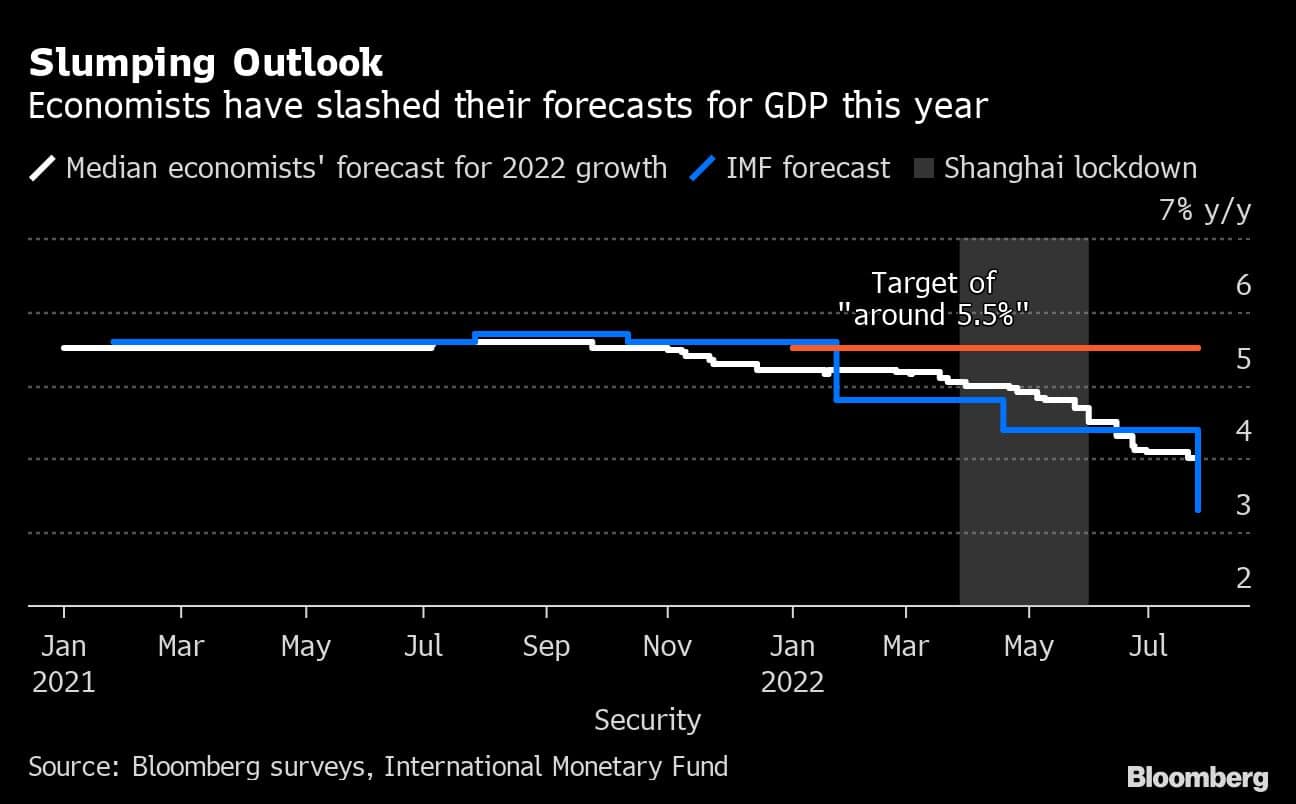 While reiterating that “housing is for living in, not for speculation,” the Politburo also said that the stability of the real-estate market must be maintained. Different policies will be implemented in different cities to support the demand for first homes and for improving housing conditions, according to the statement.

Larry Hu, head of China economics at Macquarie Group Ltd., said the idea of the central government setting up a “mega fund” to buy out unfinished projects would involve “too much moral hazard,” making it more likely that local governments would “coordinate with banks, developers and homebuyers to fix the problem.”

The meeting reaffirmed Beijing’s strategy to stamp out coronavirus cases through mass testing and stringent movement curbs. “Strict control and prevention measures must be applied whenever there is an outbreak,” it said. However, the leaders also called on officials to ensure the “orderly operation” of “key functions of economic and social development” while sticking to Covid Zero.

The nation “needs to look at the relationship between virus prevention and economic growth comprehensively, systematically, over the longer-term, and especially from a political point of view,” the statement said.

“The mention of a ‘political point of view’ implies that the economic viewpoint is not that important,” said Ding Shuang, chief economist for Greater China and North Asia at Standard Chartered Plc. “There won’t be many big changes before the Party congress,” he said, referring to the Party meeting to approve the nation’s leadership for the next five years which is scheduled to happen in the fall.

The reform of the platform economy will be completed and the regulation of the sector will be normalized, the statement said. A slew of “green lit investment cases” will be launched, it said, likely referring to projects that internet platform companies will be encouraged to invest in. The meeting also called for ensuring the security of food and energy supplies.