Webinar :Join an expert panel for a webinar on Smart investments for a secure retirement January 28, 2021. Register now!
you are here: HomeNewsTrends

In the entrepreneurial world, you do not wait for a perfect product or a service. You observe the space, orient your offer and decide a course of action.

Rahul Tewatia woke me up, in the same way the IPL has woken up living rooms from the Netflix coma. For me, a passerby, an ignorant and cold spectator of the IPL, this was an unusual event. Both his name and the story of his spectacular over became a moment to sit up and take note. Especially the fact that his performance in the prior minutes was abysmal on that day. Tewatia, the name and the name bearer’s action woke me up and many others.

Indian Premier League, the mega event, turns workstations of brands and businesses into war zones. Nobody wants to miss an opportunity to connect with their audience, whether it is through advertisements, offers or simply social media posts. That evening, marketers, sitting with a hawk eye to catch an opportunity, observed Tewatia’s sixers and bombarded their social media with messages featuring Tewatia.

Is Rahul Tewatia single? Asking for a friend.

War-zone like ambience of social media teams during events like these is a good example of Observe-Orient-Decide- Act- OODA Loop model. US military war strategist, John Boyd, a veteran officer known for his quickest reaction time for air attack, designed the OODA loop model. Not much is known about what went into Tewatia’s head in that over but a lot is known about Boyd and how he has used his strategies for his tactical wins.

As my work involved strategy and then later entrepreneurship was appended to it, my interest in Boyd’s work grew significantly. Lesser known in the general management space, Boyd’s work is referred to in a few strategy discussions. One reason for his work not to be popularly known is that John Boyd didn’t leave much documentation behind.

First, let me tell you about him and then about his model. Colonel John Richard Boyd was born in 1927 and when he attained his age eligibility for voluntary military service, he joined the Army Air corps in 1944 and served in Japan. After completion of his service, he returned to the USA, studied economics and joined the United States Air Force. He became a fighter pilot and a stint in the Korean war positioned him as the leader in tactics for the squadron. When he returned to the USA, he was stationed at the Air Force Flying school where he wrote the manual, Aerial Attack Study, which is still considered as the definitive manual for the force. He was only 33 then. 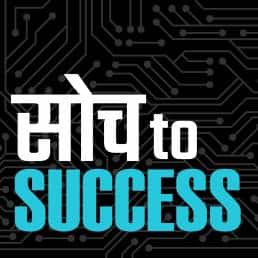 What I really admire about Boyd is how his urge to keep learning took him to do an engineering course at Georgia Tech, while he was still on Air Force duty.  Take a look at his fascinating learning aptitude timeline school-military-graduation in economics-Air Force combat-engineering and then back to teaching at the flying school. It was during his studies that he designed the Energy Maneuverability Theory that radically changed military aircrafts designs. He went on his intellectual pursuits and wrote warfare theory–OODA Loop. He passed away in 1997.

Observe:  Like social media teams at different companies observed Tewatia’s action and turned it into a communication opportunity, Observe here is to take into account the details of the events happening in the environment. See an example unfold in the following images. 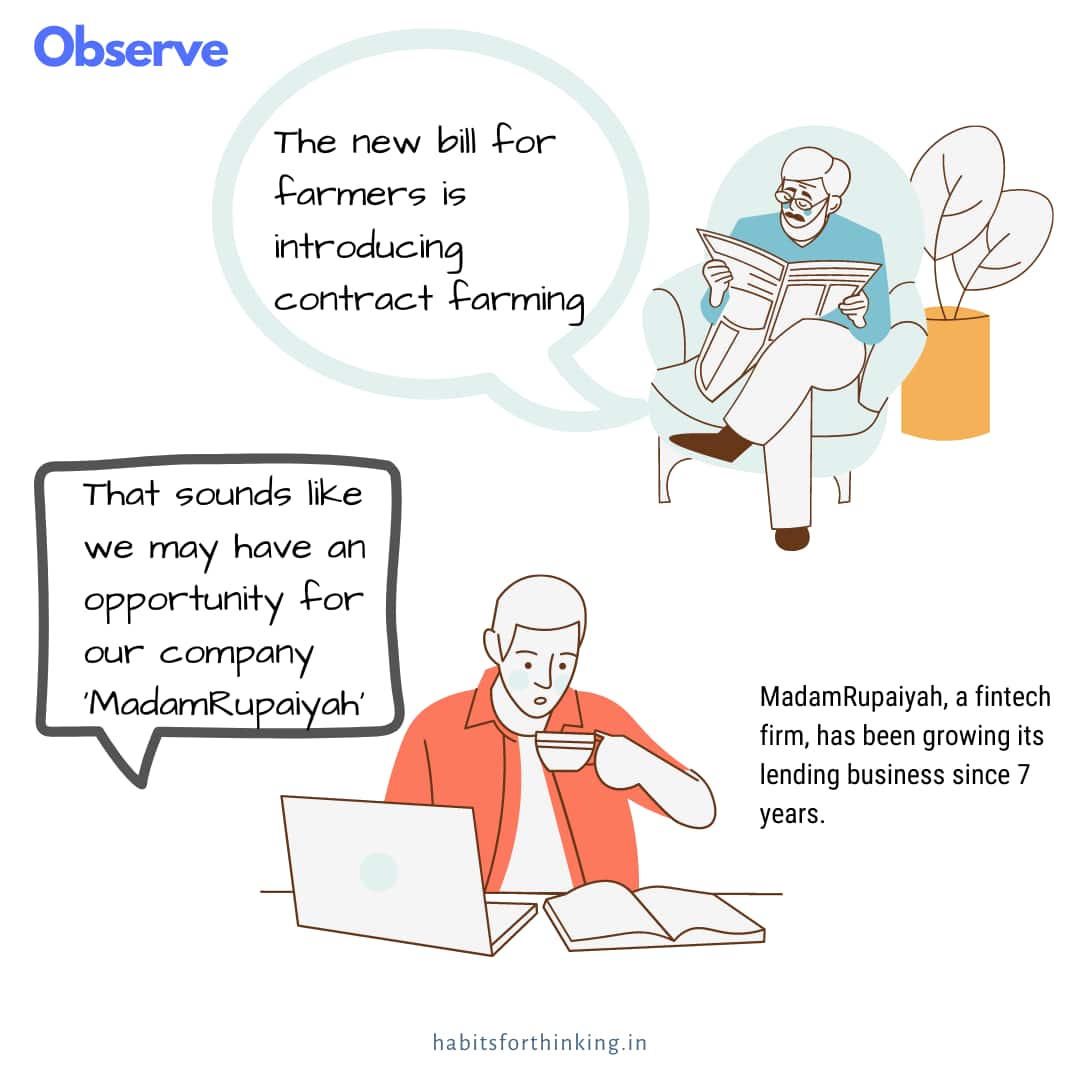 Like an imaginary fintech company, say MadamRupaiya, may observe the amended farmer bill, see the story unfold in the illustrations.

Orient: This is one of the most challenging steps in the entire decision making process. To orient is to form a mental model based on your hypothesis and observation. It is not simple. It is a totally individual experience and is governed by cultural traditions, previous experiences, genetic heritage, influences and biases. So how I orient or make a mental model about a situation is unique to me. If someone has a limited mental map or a narrow perspective, he will be restricted in his orientation, almost like watching a pyramid from an angle that looks only a triangle and taking that as the reality. Some political leaders who lead with religious biases demonstrate such limited orientation. In a business environment, the leader puts together a taskforce to this process. Members of the taskforce work individually and collectively both to arrive at decision points. 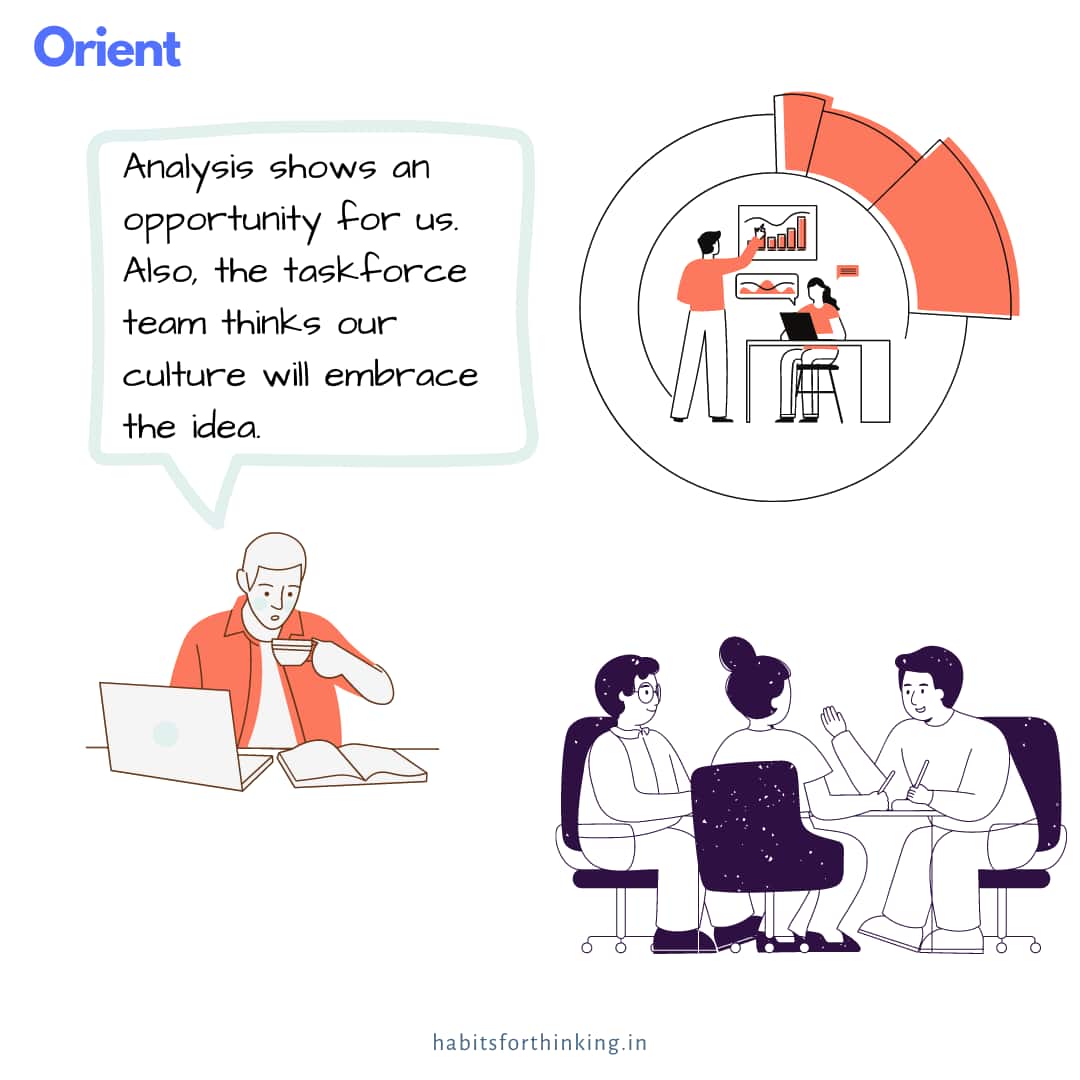 Now, our imaginary company MadamRupaiya is orienting its thoughts. It is thinking of the current customer base, its understanding of lending in the agricultural space, its culture and team’s ability, it’s competitor mapping etc.

Decide: This is the time to commit to a course of action. 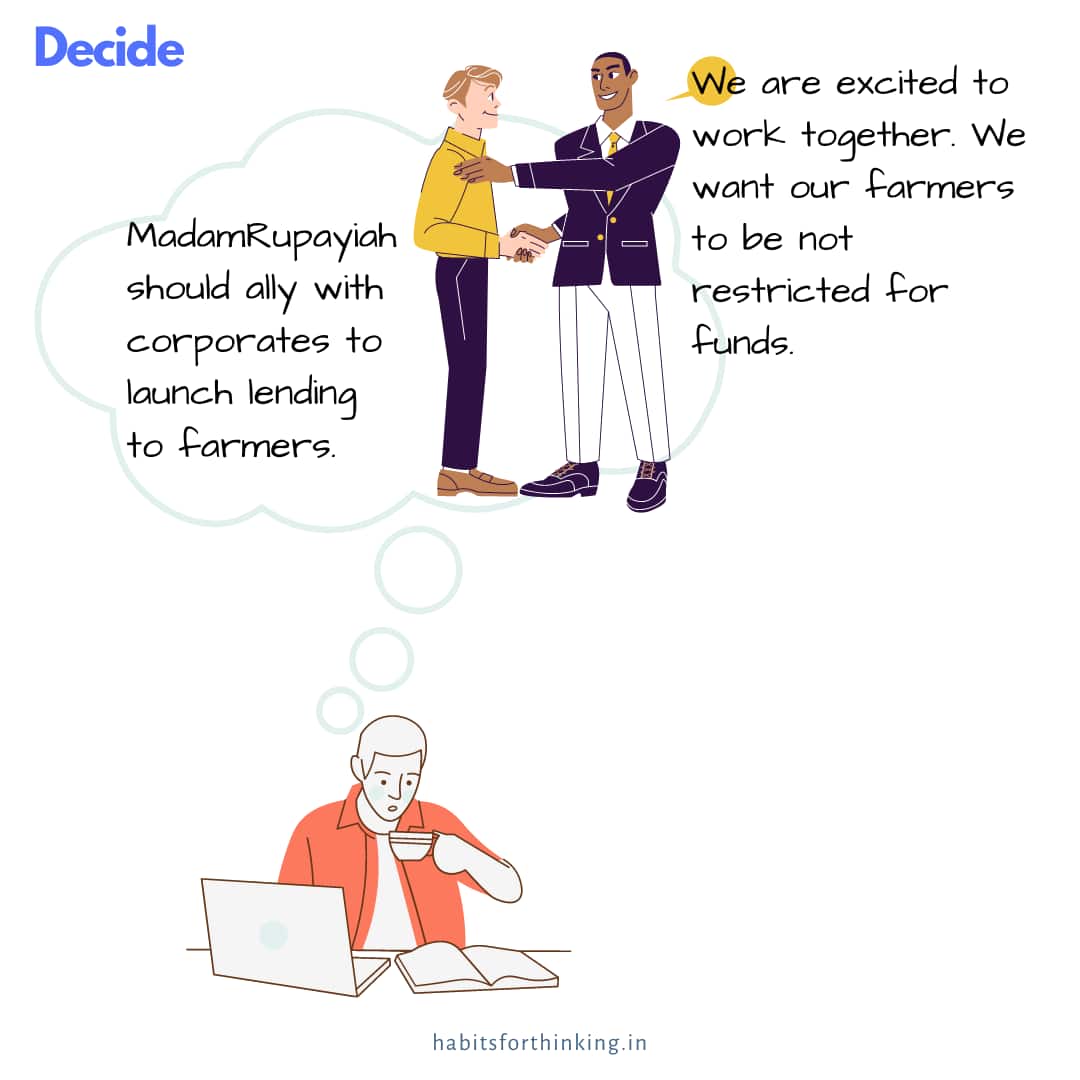 Wait, Madam Rupaiya is now setting up a team to ally with corporates. The company is deciding to walk to the farmers’ fields with their corporate partners, one of them for the produce, the other to be the lending arm.

Act: Get into action. Launch. Attack. Madam Rupaiya has made some inroads with the farmers. But the company learnt and observed unknown state’s policies. It is therefore reorienting its offerings in this state.

It is called the OODA loop for a reason–here, when you decide to act and take the actionable step you test your hypothesis, reorient, decide again and act. This is similar to MVP or minimal viable product model in innovation and startups. In the entrepreneurial world, you do not wait for a perfect product or a service. You observe the space, orient your offer and decide a course of action. As you launch the minimal viable product and gather information which becomes the base for your observation, it helps orient your decision and improve the product.  OODA is not a single step, the loop is an on-going interdisciplinary process that continues. 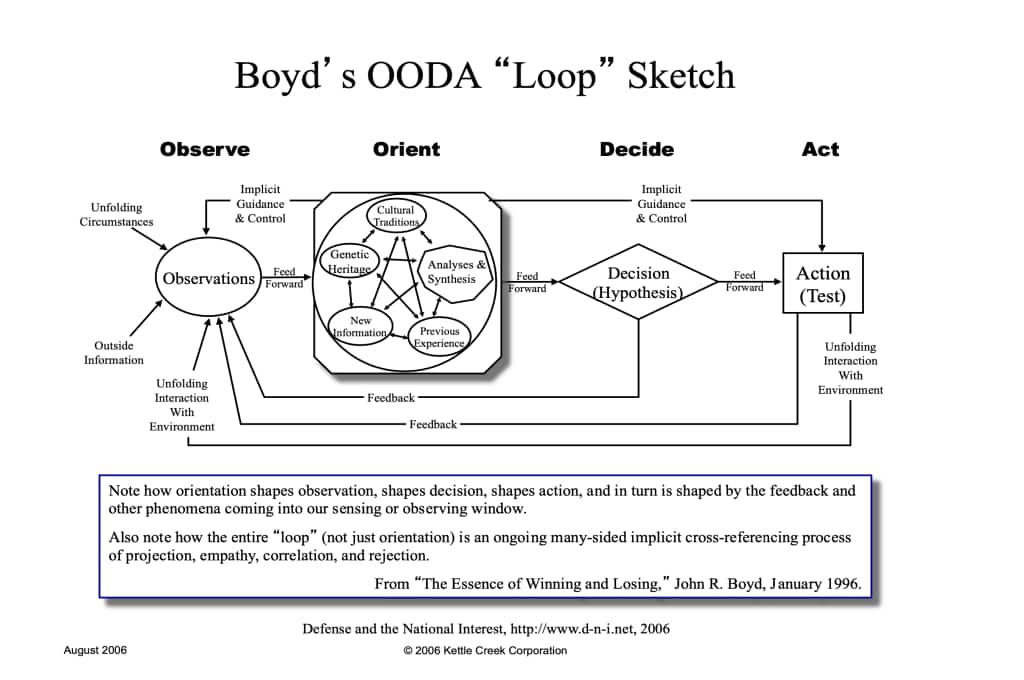 The speed of action was of critical value for Boyd. At the flying school, while working as an instructor, Boyd earned a name, “Forty Second Boyd” or his bet that beginning from a position of tactical disadvantage, he could defeat any opposing student pilot in less than 40 seconds. Boyd’s key strategy was faster use of his own mental OODA loop in air combat maneuvering.

A real business example is Airbnb’s story that demonstrates the model. The founders, at an age and time when they needed money to pay for their rentals while working on their projects, observed that there was a design convention being hosted in their neighbourhood. They oriented their thought process and decided to open their residential apartment to share with convention attendees who were willing to pay for bed, breakfast and internet. Observe the reaction, orient some more services, decide to use technology and act. The team exemplified an OODA loop then and it continues to observe and orient in the new pandemic-led circumstances.

Orient and Decide steps are the organisation’s internal processes, whereas the Observe and Act parts are meant for the external world. For any company, Orient is the differentiator. It involves strategic, creative thinking, analysis, cultural understanding and becomes the step that builds the moat around an organisation.

Tewatia, at the war front on that day, was able to orient and act at the right time. And, so were the social media teams. OODA Loop is a strategic tool that is based on scientific theories, but that is a discussion for some other day. The point to remember is that an OODA loop is a mental process for both an individual and the business.

“Machines don’t fight wars. People do, and they use their minds.”