UPCOMING EVENT:Are you 45+? Planning for retirement? We have just the right webinar for you - Planning for Retirement with Life Insurance on 27-Jan, 3pm. Register now!
you are here: HomeNewsTrendsLifestyle

Is denim in an identity crisis?

New styles emerge and recycle at dizzying speed. So fast that sometimes they seem not to move at all, like a colorful spinning wheel transformed into a blur of brown: everything relevant at the same time.

(Representative image) Denim has always been a cultural weather vane.

What kind of jeans are in right now? A trendy young person may say low slung and baggy, while their older sibling asserts the opposite. Ask industry experts and they would probably tell you skinny jeans, with data to support the point.

But set foot in any store where denim is sold, and you’ll find among the racks a panoply of silhouettes and styles: mom, dad, boyfriend, girlfriend, skater, stovepipe, 1990s, sculpted, cigarette, puddle, patchwork, contrast, slim, split. The question of what’s stylish may be better formulated in the negative: What isn’t?

The trend cycle is said to complete its journey every 20 years, and while there’s some truth to that—low-rise jeans, for instance, haven’t been popular for about as long—the adage is starting to sound dated. These days, new styles emerge and recycle at dizzying speed. So fast, in fact, that sometimes they seem not to move at all, like a colorful spinning wheel transformed into a blur of brown: everything relevant at the same time.

Such a landscape, where nothing is “in” or “out” so much as chosen or not, presents some clear wins for fashion as a form of self-expression. But what else may the smorgasbord of jeans being sold today say about this moment in history? Denim, after all, has always been a cultural weather vane.

Jeans for You (and You and You)

Classic jeans as we today know them—stiff, pocketed, blue—were patented by Levi Strauss and Jacob Davis in 1873. For decades they were worn primarily by laborers and amended to meet their needs: extra stitching for reinforcement, copper rivets to keep the pockets from ripping off, belt loops and zippers for ease of wear.

It wasn’t until the 1920s and ’30s that jeans shed their strictly utilitarian associations. By borrowing the so-called edge implied by the garment’s class associations, Hollywood cowboys like John Wayne and Gary Cooper lent denim an air of romanticized rebellion. Trace the history of American denim over the hundred years that followed and you get a rough sketch of 20th-century iconoclasts: greasers, hippies, rock stars, rappers and hipsters.

This century has had its share of denim-clad cultural figureheads, but aside from the occasional office dress-code ban, jeans have mostly lost their subversive associations. Everyone wears them.

If any strain of rebellion persists, it’s in the suggestion that we ought to refuse to bend to the whims of any one trend: to embrace, through the right purchases, our aesthetic potential as rugged individuals. Wear it your way, the ads suggest, before presenting nearly unlimited SKUs for consumers to choose from.

The decline of the universal trend is the result of a confluence of forces, namely social media, e-commerce and globalization, which have changed everything about the retail experience, from how quickly popular styles turn over, to how quickly they can be manufactured, to how they’re subsequently advertised, distributed, bought, sold and shared. (That is, so fast, your head spins.)

The monetary incentive for retailers is clear: “Every time we see some sort of new innovation in the space is when we start to see the category pick up,” Maria Rugolo, an apparel industry analyst with the NPD Group, said in a phone interview.

E-commerce changed the game. As Lorraine Hutchinson, a retail analyst for Bank of America, put it: The ability to manufacture new styles and test them in the market requires far less financial risk today than it ever has. So why limit the options?

Several rapidly growing retailers seem to have made this their entire business strategy: Shein, a fast-fashion brand popular with Gen Z, has advertised that it adds some 1,000 products to its website every day — a staggering figure that has drawn concern from climate and labor activists. (On Wednesday, there were more than 6,600 styles of women’s jeans available.)

Despite lofty pronouncements about sweatpants overtaking “hard pants,” the worldwide denim market is only getting bigger. According to Global Industry Analysts Inc., it was worth more than $60 billion in 2020, and it’s projected to grow another $20 billion by 2026. That leaves us where we are now: every style of jeans we could possibly dream of, available effective immediately.

“Personal” style, as opposed to trend based, is a popular idea today, perhaps because it suggests a kind of social progress—a movement toward a world in which fashion is inclusive, accessible and less dogmatic. That is an especially appealing proposition for consumers who feel ignored by most of the retail market.

Lauren Chan, a model and size-inclusive advocate, said that when consumers can’t find well-made, stylish clothes for their bodies, “the message they receive is that they aren’t worthy of that.” Which is why, in 2019, she founded Henning, a clothing line for sizes 12 and up.

Unlike, say, Shein, where more is more, Chan is in the business of essentializing: providing access to quality staples, versus access to everything. (For spring, she’s introducing just a single denim jeans design: a stiff, vintage-inspired straight-leg pair.)

“The plus-size market is largely made up of pieces that are semitrendy, watered-down versions of what fashion at large has been offering for the past year,” Chan said, “because plus-size fashion is often a little bit late to adapt to those trends.”

Plus-size shoppers have a long way to go before their access reflects that of straight-size shoppers—evidence, no doubt, of pervasive fat-phobia. But in the long run, it may be worth asking whether having virtually infinite choices—and infinite trends—actually reflects the average shopper’s ideal.

In his 2004 book, “The Paradox of Choice,” psychologist Barry Schwartz proposed that while freedom of choice is crucial to our well-being, having too many choices makes us anxious.

“Though modern Americans have more choice than any group of people ever has before, and thus, presumably, more freedom and autonomy, we don’t seem to be benefiting from it psychologically,” he writes.

In a recent study (now under peer review), he and his research associate Nathan Cheek explored a new hypothesis, which Schwartz explained by phone: “When you give people choices from large choice sets, even trivial choice sets, like what kind of drink they’d like, they treat the choice as a statement about who they are.”

Imagine, for instance, if you could choose between only two types of moisturizer — for oily skin, or for dry. You’d probably think little of your choice, going with whichever seems like a generally better match. Now imagine you had hundreds to choose from. Your choice between brands, skin types, ingredients and bottle shapes would seem to carry more significance — perhaps, even, feel like an expression of who you are, or what you like.

The consequence of too many options, Schwartz said, “is that even low-stakes decisions become high-stakes decisions, because when your identity is on the line, it matters.”

As someone who loves clothes, I don’t need his research to know that what he proposes is true for many: The overwhelming opportunities to express ourselves aesthetically are both a gift and a curse, capable of inciting joy as much as dread.

Georg Simmel, said to have publicized one of the first official “theories of fashion” in 1895, believed that fashion is defined by the push and pull between the desire to conform and the desire to distinguish oneself.

This tension, he said, is critical.

“Fashion exists only insofar as one of the two poles does not ultimately prevail in the end,” Sergio Benvenuto, an Italian psychoanalyst, wrote on Simmel’s theory.

This may be why, as Anna Wintour once put it, “Fashion can make people very nervous.” To get dressed is to walk a tightrope with ourselves at one end and everyone else on the other. 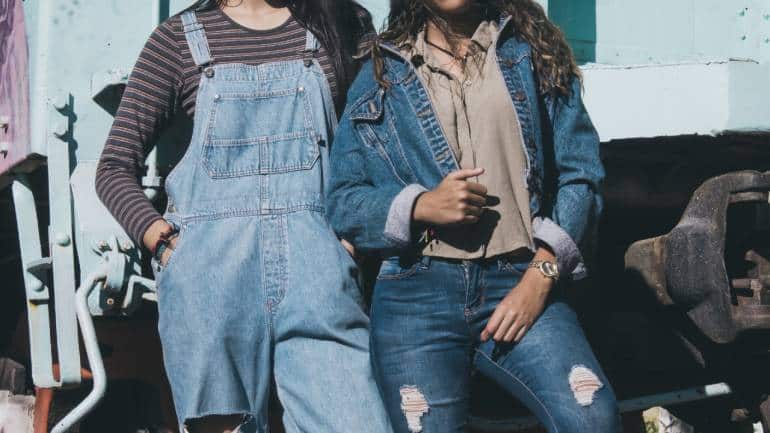 ‘The Lack of Trend Is the Trend’

Katrina Klein has been designing jeans for nearly 20 years—for J Brand, Rag & Bone and now her own label, ASKK NY. She remembers vividly every microtrend she’s witnessed: colorful, patterned, embroidered, destroyed, whiskered. Right now, she said, “The lack of trend is the trend.” And she doesn’t think that’s a bad thing.

“People don’t really want to be dressed the same as everybody else,” she said.

Individualism: It seems like an almost too obvious place for this inquiry to land. As modern technology continues to provide access to abundance while driving us into increasingly isolated corners of existence, it makes sense that fashion — famously a reflection of the zeitgeist—would follow a similar trajectory.

“There’s a cynical part of me that wonders if part of this is not about personal style, but that personal style is benefiting in a system that produces so much,” said Haley Mlotek, a fashion critic and an editor for the website Ssense.

She also wonders if the emphasis on individualism misses something about the sense of shared meaning bolstered by trends: “This idea,” she said, “that the ultimate expression of style is one that is completely your own feels very lonely to me.” A disruption, maybe, of Simmel’s equilibrium.

Much of Mlotek’s work concerns the future of fashion. Rather than assuming ethics, politics and morality are in conflict with fashion’s goals, she’s curious about how they might enrich one another. In the context of trends, their decentralization may provide an opportunity to approach fashion with more intention. A reproach, of a kind, of the former system whereby a few powerful figures had outsize sway on what was considered cool, and the rest of us were merely meant to fall in line.

But the pursuit of personal style as the singular apex of fashion may be taking this ethos too far, and the way it’s currently metabolizing has alarming environmental effects.

“Just because fashion and consumerism overlap does not mean they are synonymous,” Drew Austin, a writer who covers urbanism, technology and social change, said in an interview last month. “Every culture throughout history has used clothing to express itself, and doing so is arguably even more important in cultures and subcultures where fashion is less captured by consumerism — where it best performs its role as a communication medium and an enhancer of public space.”

“Wear it your way” imbues clothing with a social purpose outside the language of status. But as a whole-cloth fashion philosophy, it has clear costs. Unlimited choice is no fashion utopia: not for consumers, not for garment workers or supply chains, and not for the planet. One thousand styles of jeans, in other words, will not save us.

Constraints, on the other hand, can present a creative opportunity, Schwartz said: “They’re exhilarating in a way that simple novelty could never be.”

This article originally appeared in The New York Times.