Live: Live: Will Q2 Earnings Help Revive Spark In IT Stocks? |
you are here: HomeNewsTrends

It’s never too late to educate yourself or start a new career: sci-fi writer SB Divya

After working as an engineer for two decades, SB Divya now weaves incredible sci-fi tales in her second career as author.

In SB Divya’s 2016 novella Runtime, nominated for the prestigious Nebula Award for science fiction, a gritty, under-equipped young tech genius competes with the most advanced cyborgs in a challenging multi-terrain marathon set in the distant future. As the protagonist battles the elements, pain and even betrayal equipped only in gear put together from other people’s garbage, the gripping, fast-paced narrative brings up issues relevant to the present world: economic inequality, corporate monopoly, and social injustice.

There are other thought-provoking, absorbing stories in Divya’s 2019 collection Contingency Plans for the Apocalypse (Hachette, Rs 399), which is full of fantastical situations, genderless, ageless humans and brilliant machines – a must-read not just for fans of sci-fi but anyone who loves a good book.

“Most of my ideas tend to be mashups of different elements in real life. The technological inspiration often comes from science and technology, because I love to read up on the latest research and developments. I draw the human and social elements from observations about my life or news items,” says the 44-year-old US-based author, who worked for 20 years as an electrical engineer before becoming an author.

Born in Pondicherry, India, Divya moved to the US with her parents at the age of five. “My father was a business professor (now retired), and mother raised me full-time until my teens, when she became a software engineer. I got into science fiction around the age of nine or 10. I also enjoyed math, science, oil painting, and bharata natyam,” she narrates. Currently based in southern California, Divya continues to visit family in India every few years.

“In my teens, I was inspired by a school science project about the life-cycle of stars that put me on the path to astrophysics, which was originally my major in college. I made the switch to engineering about halfway through my undergraduate studies. Then I discovered that Caltech [California Institute of Technology] had an interdisciplinary department in computation and neuroscience. That major let me combine physics, biology, and electrical engineering. It was a perfect fit for me,” she shares.

Divya did her Master’s in signal processing and digital communications after marriage at University of California San Diego. “Today, however, with the popularity of AI and machine learning, I've been able to put my undergraduate knowledge to better use,” she says.

Her experience contrasts with ordinary girls in India who have to struggle to even complete their education or opt for subjects of their choice, forget the STEM fields, which require more years of study. How far can the education system help if parents aren't as supportive of their daughters' education and course choices?

“It can definitely be challenging if parents aren't supportive at all,” admits Divya, adding, “That said, I think opportunities for education can come after becoming an adult and even after getting married and having children. My mother got her degree in computer science well after I was born, and I kicked off my writing career in my mid-30s after taking some online classes. I had a preschool-aged child by then, too! It's not easy, but I would say that it's almost never too late.” 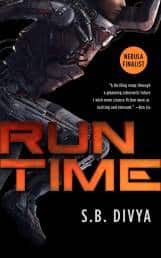 Five years ago, Divya joined Escape Pod, the first sci-fi podcast in the world, and is now co-editor of the platform. “I've learned a lot from my years with the podcast. Initially, it helped me become a better short story writer. Now, as an editor, I've had the privilege of discovering new writers, I can open doors for greater diversity and representation, and I have learned a ton about audio and narration work.”

At present, Divya is working on her next novel Machinehood, due to release in 2021. “Ever since I started publishing, my close friends (who read science fiction) have asked me when I'm going to write a story about artificial intelligence. Since this is also a field I've studied and worked in, I had a hard time encapsulating all the nuances I wanted to express about AI in a short story. Machinehood is my answer to that,” says Divya.

A novel set in at the end of this century, it explores the conflict between human and AI labor, the ethics of using AIs in that capacity, advances in biotechnology, and the meaning of intelligence. The main characters are a mixed-race American ex-special forces woman, and a South Indian biogeneticist (also a woman), and the story is a political thriller.

“I'm hoping that Machinehood is entertaining, engaging, and sparks lots of conversation about the use of AI and biotech in the upcoming decades,” she smiles.

The greatest personal benefit that Divya has gained from her engineering career has been to learn and embrace a growth mindset – a lesson she applies to her writing career as well. “Engineering has taught me to understand and accept lack of perfection as well as outright failure. For both writing and technology, I find myself using a similar development system: define a problem, break it into manageable tasks, brainstorm solutions, draft, debug, and finally, release to the world.”

In the midst of the novel coronavirus pandemic, Divya admits to being pretty disappointed in humanity's reaction to scientific expertise. “It's clear that science education still has a long way to go for the general public!” she remarks.

“That said, science is also where I find solace and hope for the future of humanity,” she goes on. “We continue to make incredible discoveries in all fields. Academics and researchers are finding clever ways to continue their work while sheltering at home. And beyond the pandemic, I think we're on the cusp of new breakthroughs in physics (regarding dark matter) and biology.” A scientist’s work never ends.