During lockdown, UC Berkeley's Dr Banerjee Saxena says, it's important to ensure worker safety, and establish mechanisms to protect workers in case of job losses and to ensure liquidity.

As India works on enhancing bilateral ties with Bangladesh through economic cooperation, it is vital to understand how the COVID-19 pandemic has affected our neighbour and learn from how they have coped. The readymade garments industry in Bangladesh, which accounts for approximately 80% of its total exports, was badly hit when production and global trade came to a standstill in March 2020.

When the public health crisis turned into an economic one, labour activists and civil society campaigners came together to put the human rights of workers at the centre and demand accountability from factory owners, international brands and the Bangladesh government.

Based on interviews with various stakeholders, a report titled "The Weakest Link in the Global Supply Chain: How the Pandemic is Affecting Bangladesh's Garment Workers" (2021) has been published recently by the Institute for Human Rights and Business (IHRB) in London, and the Subir and Malini Chowdhury Center for Bangladesh Studies at the University of California Berkeley.

One of the principal authors is Dr Sanchita Banerjee Saxena, Director of the Subir and Malini Chowdhury Center for Bangladesh Studies, and Executive Director of the Institute for South Asia Studies, both at UC Berkeley. She also teaches at the Haas School of Business, and is a fellow with IHRB. 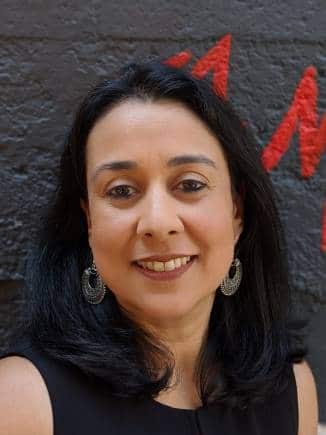 In the past, she has edited the book Labour, Global Supply Chains, and the Garment Industry in South Asia: Bangladesh after Rana Plaza. The other two authors are Nancy Reyes Mullins and Salil Tripathi.

Excerpts from an interview with Dr Sanchita Banerjee Saxena:

How much does the readymade garment (RMG) industry contribute to Bangladesh’s economy?

The RMG industry, which accounts for approximately 80% of Bangladesh’s total exports ($34.13 billion in 2018-19), is a major contributor to the country’s economic advancement. Bangladesh has seen rapid industrialization due to garment manufacturing. It is the world’s second-largest exporter of RMGs, which go to 132 countries. Exports doubled from 2010 to 2015 and will nearly triple by 2022. Some 4.4 million workers, a large majority of whom are women, work in the industry.

Why are garment workers the weakest link in the supply chain?

Brands choose to base their supply chains in countries with low wages and weak social protections. Brands’ economic power allows them to dictate how profits are made and distributed along their supply chains, including the ever-smaller share available for suppliers to pay their workers decent wages, ensure safe and healthy working conditions, or provide workers with legally mandated benefits upon termination.

How has the COVID-19 pandemic affected workers?

In a UC Berkeley-BRAC study, 82% of the Bangladeshi workers interviewed said the income they had in April- May 2020 was less than the income in February 2020. Some 77% said it was difficult to feed everyone in their household and 69% of the workers ate less protein-intensive foods (meat, fish, eggs, and milk) from February to May. Another study found that the average basic salary of 7,200 takas per month, while higher than the prevailing minimum wage (5,300 taka that was set in 2016), is nonetheless low, as it is at “53% of the ‘living wage’ estimated by the Global Living Wage Coalition (13,620 Takas) and just 20% of the 36,385 takas estimated by the ‘Asia Floor Wage’".

Years of only incremental changes to wages, without reaching a fair or adequate wage, created extreme vulnerabilities for workers in Bangladesh during normal times. During the COVID-19 pandemic, low wages resulted in serious compromises in consumption and asset depletion.

These vulnerabilities are further exacerbated when we analyse salary figures by tenure and position; operator and helper roles are the lowest paid and such jobs are primarily held by women. In the UC Berkeley-BRAC survey, 70% of operators and 82% of helpers were women. Women are also more likely to be responsible for the well-being of their children and families, and face more anxiety and stress when they cannot provide for their families.

What about the contractual commitments of international brands?

The brands were able to dictate terms initially, such as asking the manufacturers to stop producing until further notice, and in some cases, even to cancel contracts. Those cancellations hurt Bangladeshi manufacturers and workers deeply. Some factories had to consolidate and close down. Others had to drop entire lines of manufacture or think of selling products at a discount in domestic markets or elsewhere. The brands said they had little choice but to pause, since nobody knew how long the lockdowns would last, when malls and boutiques would reopen, and what protocols would be established to resume commerce. Online commerce took off, but it took some time, since even the shipping companies were in the process of revising their operations.

How effective is the strategy of naming and shaming via civil society campaigns?

Brands say they acted on their own once the market situation stabilised. Campaigning organizations assert that the brand response shows that their strategies were effective. The garment sector is sensitive to consumer pressure, and campaigns that target brands do compel the brands to react, because the market is competitive and consumers can switch brands easily. Brands want to be seen as responsible and progressive, particularly to attract idealistic, younger consumers.

What can be done to redesign the supply chain in a way that protects human rights?

As Bangladesh enters its second lockdown, it is important that crucial lessons from the first lockdown are learned: place the worker first; ensure worker safety; establish protection mechanism for the workers in case of job losses; create financial mechanisms to ensure that liquidity is maintained; intervene early and act proactively to establish meaningful dialogue between affected parties. All parties – Bangladesh government, international agencies, brands, suppliers, and unions – have a role to play. The responsibility to mitigate human rights harms to the workers is shared, between the government, companies – Bangladeshi and foreign – and the international community.