India experienced five cyclonic storms in 2020, as against the eight encountered in the previous year. A super cyclonic storm--Amphan--over the Bay of Bengal this year was reported after 21 years with the last such recorded in 1999.

The satellite image released by NASA shows Cyclone Amphan over the Bay of Bengal in India. The powerful storm is expected to make landfall on May 20, 2020 near Sundarbans, south Kolkata. (Image: AP)

The year 2020 has gone through a series of whirlwinds, not just the spread of novel coronavirus and its aftermath, but in the climatological sense as well.

India experienced five cyclonic storms--two in the Arabian Sea and three in the Bay of Bengal--in 2020, along with the formation of two depressions and two deep depressions. Of the five cyclones, one was severe, two--very severe and one super cyclonic storm.

A disturbance having maximum average surface wind speed in the range of 34 to 47 knots (62 to 88 kmph) is classified as a cyclonic storm, while wind speed between 17 and 33 knots (31 and 61 kmph) is called depression/deep depression. 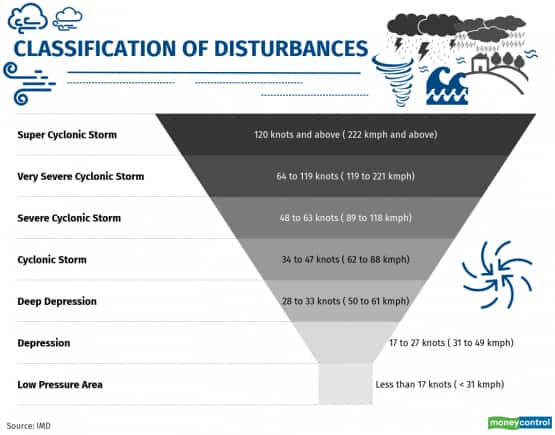 Amphan was the first Super Cyclonic Storm (SuCS) over the Bay of Bengal experienced in 21 years after the 1999 Odisha SuCS. The cyclone occurred in May (16-21) this year, affecting the two eastern states of West Bengal and Odisha. As many as 99 people lost their lives in West Bengal as per the official estimates, with no deaths reported in Odisha. More than 6 lakh houses were damaged, 23,965 cattle lost and 5.82 lakh hectare cropped area affected in these two states.

While Burevi was the last cyclonic storm recorded this year (November 30-December 5) over the Bay of Bengal.

On an average (measured between 1891 and 2017), five cyclones develop over the North Indian Ocean in a year, of which four are over Bay of Bengal and one over Arabian Sea. However, the Arabian Sea alone reported five cyclones in 2019, against the normal of one per year, matching its previous record in the year 1902 for the highest annual cyclone frequency over the Arabian Sea, the government informed the Lok Sabha on September 23, 2020.

"In the recent past, increase in frequency had been observed in formation of cyclones in the North Indian Ocean. Also studies show an increase in frequency of severe cyclones over Arabian Sea in recent years," the government reply said.
Chaitanya Mallapur
Tags: #2020 #climate change #cyclone #India
first published: Dec 31, 2020 09:20 am