Journalist Gayatri Jayaraman’s new memoir about her vipassana experience 'Sit Your Self Down' accomplishes a rare feat.

The thing about reading a book on meditation is that you can’t really know what the writer is talking about unless you do it yourself. It’s like trying to imagine the taste of hummus or mango pickle, or anything really. Experience is the only teacher.

In that sense, though, journalist Gayatri Jayaraman’s new book Sit Your Self Down (Hachette, Rs 399) accomplishes a sleight of hand. Instead of trying to describe vipassana meditation or the taste of it – an impossible mission – she describes her own experience of it in minute detail.

So that by the time you journey with her from day one to day 10 – from the pain in the legs to the tilt on the right side, from self-flagellation or judging one’s roommate to the nerve-wracking release of tears, from memories of abuse to the dawn of forgiveness – it’s almost like you’ve been there yourself.

This book is a testament that the 10-day silent meditation retreat is not so much a getaway from one’s own life as a getting into it – in microscopic detail, no less. It certainly helps that the author is good-humoured about it; there’s nothing worse than an earth-shattering breakdown, than an earth-shattering breakdown without a few wry remarks thrown in. 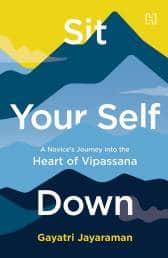 It also helps that she is brutally honest with herself, and subsequently the world at large, about her own truths, though one marvels at the courage it must take to do so. By accepting and revealing herself – warts, dark history and all – she allows the rest of us to do the same.

Progressing into the book from Gayatri’s first days at the centre, to adjusting to the various inconveniences and then learning to look within for answers, feels like knotting up and letting go of a deep sigh.

Self-work is not for the faint of heart, and it is commendable that the author manages to not only stick to it but allows it to transform her in a way that only divine grace can.

The difference between her previous work of non-fiction, Who Me, Poor?: How India’s Youth are Living in Urban Poverty to Make it Big (Bloomsbury, 2017), and this one is stark. Except for the self-aware sense of humour, it is almost like the two books have been written by two different human beings.

But then, that’s what vipassana does to you. Makes you more human, makes you more being. It takes you places you never imagined, makes you experience sensations you never knew you were capable of, and shows you a universe of space and silence – all within your five-foot body.

With shock and awe, you realise your craving for adventure, travel and new experiences was naïve. You need not go anywhere for little things like that. You are the whole world in yourself.

Vipassana literally means ‘special-seeing’ or ‘insight’. It’s a form of meditation that seeks to unravel the true nature of reality by shining the spotlight on human sensation in whole and in painstaking detail. The 10-day silent retreat format was developed by the Indian vipassana teacher and Padma Bhushan awardee Satya Narayan Goenka (1924–2013).

Born in Burma to an Indian business family, he moved to India in 1969 and set up vipassana centres all over the world, funded by voluntary contributions from students. His explanations of Buddhist concepts are largely universal and scientific – for instance, he talks of annicha (impermanence), metta (unconditional love), and of ‘the space between stimulus and response’. 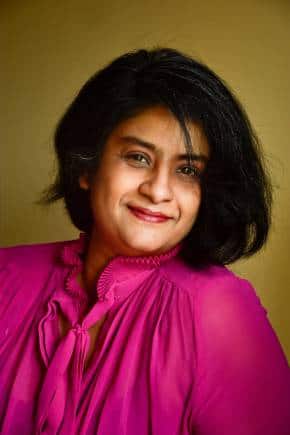 Dotted with cute illustrations, Gayatri’s memoir is divided into 10 chapters, one for each day of the meditation. Evidently blessed with a remarkable memory – for writing material is not allowed inside the centres, forget digital devices – she takes the reader through her day-to-day routine at the first vipassana retreat she attends in Sikkim (she later attends more).

To protect the other participants’ privacy, names have been changed but their stories are imminently relatable.

The author’s preoccupations in the first few days of the retreat are classic ‘journalist-goes-to-vipassana’. She observes everything from the point of view of her media training, making mental notes and questions everything she observes, even joking to herself about certain rituals.

As the days go by, her thoughts turn to her relationships – as a single mother, she naturally dwells at length on her teenage son and their ups and downs together, on her romantic liaisons, and issues she had with colleagues.

It’s interesting to see how her thoughts become so much more personal and intimate as her journey progresses. She wakes up to the truth that all the other issues and situations in her life had resulted from her own reactions to previous events, leading to a chain of interconnected actions and reactions. Her karmic patterns become clear to her.

By the end of the book, the light of awareness rids the dark corners of her mind of all fear, and she is able to chart an entirely new destiny for herself. What may appear as a drastic transformation from the outside is a matter of course for the soul inside.

Each one’s journey will naturally be different, but for those looking to begin, Gayatri’s memoir is a handy roadmap. Those already on the path will find themselves smiling and nodding along the way.

And for those afraid of going back, it is a gentle reminder that we cannot run far from our truths even if we drown ourselves in the busy-ness of living. Ultimately, we will have to sit ourselves down in the silence.