Samsung Galaxy M53 5G Review: A strong contender for the title of best smartphone under Rs 30,000

Samsung is not always known to deliver the best hardware in the mid-range, but can the Galaxy M53 5G shatter that image? Stick around and find out!

The Samsung Galaxy M53 5G was unveiled in India back in April 2022. Unlike Samsung’s Galaxy A and S series smartphones, the Galaxy M line-up aims to bring the best value by offering an excellent combination of hardware and software.

The Galaxy M53 5G has a rather minimalist design. There’s not a lot of focus on the outside of the phone as the glossy finish does tend to attract smudges. The M53 is available in Blue, Green, and Emerald Brown colours, while our model arrived in Green. There’s a square-shaped camera bump on the top left, while the Flash module sits right under it. If you don’t like over-the-top looking designs, then Samsung’s minimalist approach will be quite appealing. On the plus side, the M53 has a rather slim and light profile, measuring a meagre 7.4mm thick and weighing in at 176 grams. 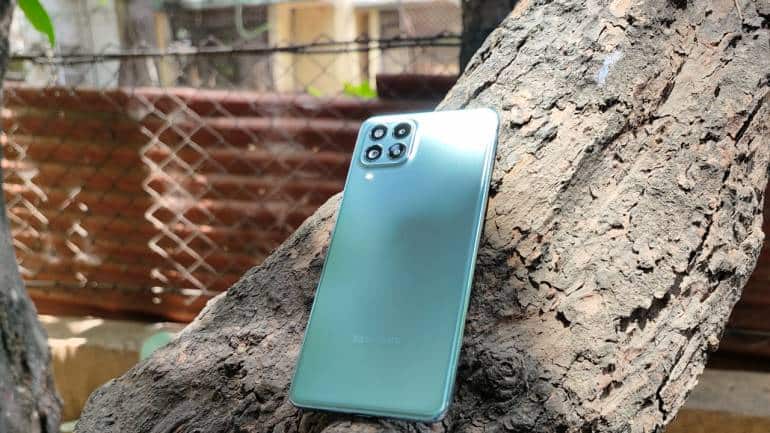 However, the M53 does have a polycarbonate back, which doesn’t have that premium glass feel. The frame is also made of plastic, but you do get very tough Gorilla Glass 5 protection on the front. The Galaxy M53 5G opts for the standard button placement with the power and volume buttons on the right. The M53 also features a SIM tray on the left and a USB-C port on the bottom. While the build quality of the Galaxy M53 5G is not the best, the minimalist design was preferable compared to some over-the-top designs we have seen from Chinese smartphone makers.

While Samsung does make a few build concessions, that’s not the case with the display. The Galaxy M53 5G sports a 6.7-inch FHD+ Super AMOLED display with a hole-punch cutout on the top. The screen doesn’t support HDR10 but reproduces accurate yet vivid colours and sharp contrast ratios. You can also adjust colour temperature of the screen to suit your liking. The panel also boasts a super-smooth 120Hz refresh rate, making it one of the smoothest displays in the segment. The screen here also has good viewing angles and gets sufficiently bright under direct sunlight. Overall, the M53 5G has a pretty good screen, although HDR support could have made it a great one.

For performance, the Galaxy M53 5G opts for a MediaTek Dimensity 900 chipset paired with the Arm Mali-G68 GPU. The phone also features up to 8GB of RAM and 128GB of storage. In my Geekbench testing, I found that the MediaTek chip fell marginally short of the Snapdragon 778G SoC on the Galaxy M52 5G. While the single-core performance of the M53 5G was the same as the M52 5G, the multi-core score dropped by around 25-percent on the M53. The Galaxy M53 5G also managed a 15 to 20 percent lower overall AnTuTu score than its predecessor. The Snapdragon 778G is also better at handling games than the Dimensity 900 chip. That being said, the MediaTek Dimensity 900 SoC does a solid job and handles multi-tasking with ease. However, you might come across a few issues with more demanding tasks like video editing. Moving on to gaming, most titles run without any hiccups on the M53 5G. Not all games run on maximum settings but you’ll still get playable frame rates in every title on lower to medium graphics. Call of Duty: Mobile ran on both High and Medium graphics, I preferred the latter with ‘Very High’ frame rates. Apex Legends Mobile also ran on HD graphics, although I defaulted to the Normal settings for better frame rates. While the MediaTek chip might not be the fastest in the segment, it does get a job done and is not quite far off from a lot of Samsung’s competitors here.

For optics, the Galaxy M53 5G features a quad-camera setup on the back with a 108 MP at the helm. The main camera is paired with an 8 MP ultrawide shooter, 2 MP macro unit, and a 2 MP depth sensor. On the front, you get a 32 MP selfie camera. Lastly, the M53 can record 4K video at 30fps on both the front and rear cameras. 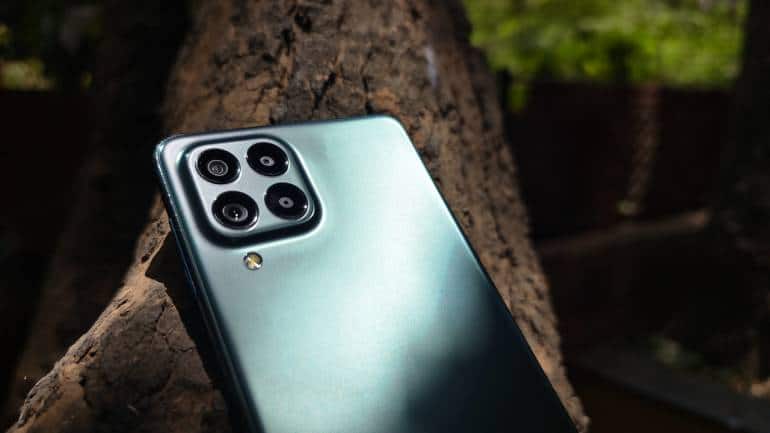 In daylight, the 108 MP primary camera takes sharp, detailed pictures with good dynamic range. Colours can look a bit more saturated than I’d liked but that worked out well at times. Photos taken on the main camera in daylight are quite crisp and sharp with good exposure. Portrait mode also proved to be quite effective with adequate light. However, in all instances, the M53 did have a bit of shutter lag, which could be frustrating at times.

The 8 MP ultrawide camera maintains colour consistency between the main camera in good light. However, photos on the ultrawide lack detail with visibly softer images. Additionally, the ultrawide camera also reduces distortion on the edges.  Lastly, the macro camera on the M53 5G was quite consistent in daylight, allowing you to get close to subjects with consistently good results. 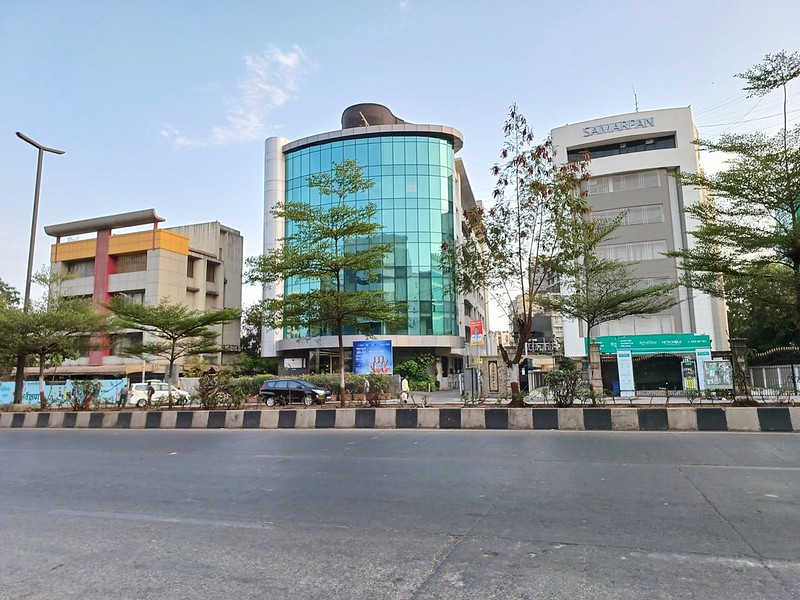 The 32 MP selfie camera on the M53 5G reproduces natural skin tones and good detail, although images look softer with a bit of over-sharpening. Portrait mode offers good edge detection and background blur. Finally, the Galaxy M53 5G can capture 4K video at 30fps with decent stabilization, although there’s no OIS. Footage looks good with accurate colours in daylight, but low light video performance was quite poor, which is the case with all smartphones in this range. I found the 5,000 mAh battery on the Galaxy M53 5G more than sufficient to last an entire day under heavy usage. My heavy usage included an hour-long video call, gaming, watching videos on YouTube, browsing social media, playing around with the camera app, and running a few benchmarks. I still ended up with 5 percent battery to take into the next day. Under more moderate use, you are likely to move into the next day with around 15 to 20 percent battery life. While the battery life on the M53 5G is excellent, the charging isn’t. The 25W fast-charging support is nowhere close to some of the numbers we are seeing from Realme, Xiaomi, and OnePlus, although that wasn’t the main issue here. As with most modern Samsung phones, there’s no charger in the box with the M53 5G, so I had to charge the device through a USB Type-C cable on my laptop. And this can take a little under two hours to hit a full charge.

On the software side, the Galaxy M53 5G runs Android 12 based on One UI 4.1 on top. While Samsung’s One UI is one of the best Android skins on the market, the version of the software on the M53 5G does come with some pre-installed bloatware. The good news is that most of it can be removed. The One UI experience here was pretty similar to that of the Galaxy A53 5G (Review), with the M53 bringing features like multi-window, smart widgets, secure folders, and more. The UI also brings a ton of customisations and camera enhancements. Samsung has also pledged to offer two major Android updates and four years of security updates with the Galaxy M53 5G.

The Samsung Galaxy M53 5G is an excellent mid-range smartphone with good hardware and even better software. While Samsung is not always known to deliver the best hardware in the mid-range, I think the Galaxy M53 5G does tend to shatter that image. There are a few shortcomings here, like the MediaTek chip not quite being as powerful as last generation’s Snapdragon SoC or the plastic back and lack of HDR support on the display. I also think Samsung should have included a charger in the box. But the overall hardware experience is still pretty impressive. Plus, the guarantee of timely Android updates sure doesn’t hurt. The Galaxy M53 5G has impressive battery life, solid performance, reliable cameras, and excellent software, which earns it an easy recommendation in my book. While the Samsung Galaxy M53 5G may not be the best performer in the segment, it does do a lot of good things across the board, making it excellent for those who prefer a well-balanced smartphone.
Carlsen Martin
Tags: #best Smartphones #MediaTek #Samsung #Samsung Galaxy M series #smartphones
first published: May 30, 2022 04:19 pm