The Lenovo Legion 7 is a laptop configured with top-end specifications, but without much of the bulk seen on gaming laptops that are deemed desktop replacements.

When it comes to the higher end of the laptop gaming segment, bigger is always better. With machines like the MSI GT76 Titan and Alienware Area 51 capable of challenging gaming desktops. But these mobile monstrosities come at a significant price and can weigh nearly five kilos.

Enter the Lenovo Legion 7, a laptop configured with top-end specifications, but without much of the bulk seen on gaming laptops that are deemed desktop replacements. The Legion 7 arrives with an AMD Ryzen 9 5900HX and an Nvidia GeForce RTX 3080 Laptop GPU. However, this new slim and light design on higher-end machines is not uncommon as seen with the top-end Asus Zephyrus models, the Alienware x17, and Razer Blade 15. But given its smaller form factor, let’s find out if the Legion 7 Slim can deliver on its promise of performance.

The Legion 7 features a solid aluminium build coupled with a dark grey finish that gives it a premium look and feel. The laptop weighs around 2.49 kg, which is modest for a laptop that packs in so much power. Apart from not being that heavy, it was relatively slim at 23.5 mm. The Legion branding is engraved on the top left of the lid, while the Lenovo logo is seen on the bottom right of the lid and at the bottom of the keyboard. 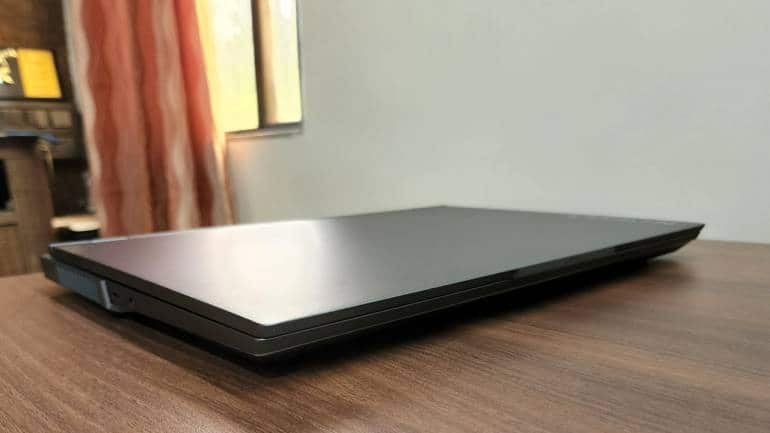 I also noticed the narrow bezels on all four sides of the display. The Legion 7 also opts for a 180-degree hinge design to lay the notebook flat on a surface. There’s a lot of venting on the laptop’s sides to ensure proper heat dissipation. However, the star of the show here has to be the RGB lighting. While the laptop has a subtle finish, the RGB lighting is anything but subtle. The lighting is not only visible on the keyboard but also surrounds the laptop from the bottom.

The Lenovo Legion 7 comes with a full-size backlit keyboard with a Number Pad. Lenovo's TrueStrike keyboard features a travel distance of 1.5mm, giving you a nice tactile feel when gaming and typing. Additionally, there was no keyboard flex, although the keys do feel cramped together, which can result in some annoying typing errors. However, that being said, I got used to the keyboard quite fast and it was superb for gaming. Additionally, the keyboard also features per-key RGB lighting that is fully customisable through the software. The Precision touchpad on the Legion 7 is fairly large, while the matte finish allows your fingers to smoothly glide across the surface area. It also accurately records gestures and sliding your palm across the surface doesn’t really move the mouse, which was really convenient. You can also disable the touchpad with the FN + F10 command. I defaulted to using the mouse throughout my use of the Legion 7 Slim and very rarely used the touchpad, but it felt comfortable and convenient to use when needed it.

The Legion 7 has most of its ports on the back, although there is a USB-C 3.2 port and headphone jack on the left and a USB-C 3.1 and webcam shutter button on the right. On the back, you get three full-size USB Type-A ports, an Ethernet port, an HDMI 2.1 port, and another USB Type-C port with DisplayPort support. 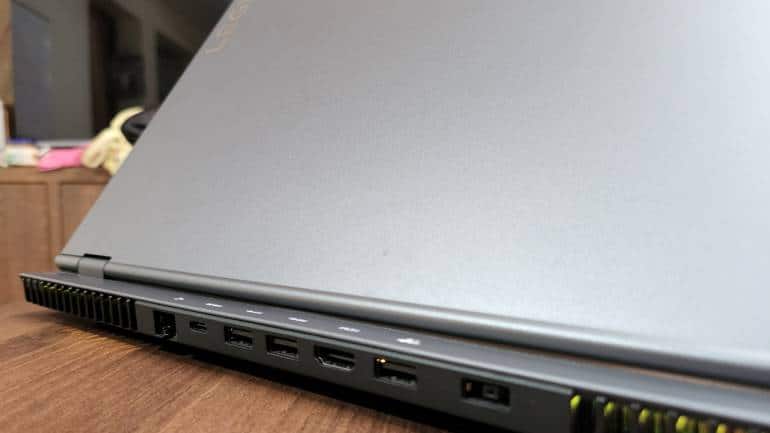 There’s no Thunderbolt 4, while other connectivity options include Killer Wi-Fi 6 (802.11ax) and Bluetooth 5.1. There is no shortage of ports on the Lenovo Legion 7 and since an excess of ports is in no way is a bad thing, I’d say that the I/O assortment here is perfect.

For the display, Lenovo opts for a 16-inch IPS panel with a WQXGA (2560 x 1600 pixels) resolution. The screen boasts a 165Hz refresh rate and a 3ms response. The Anti-glare, non-touch display boasts a peak brightness of above 500 nits, which is quite significant, gaming laptop or otherwise. On top of an already impressive display, you also get features like DisplayHDR 400, Dolby Vision, and G-Sync support. The screen also boasts 100 percent sRGB coverage making it good for intermediate content creation. 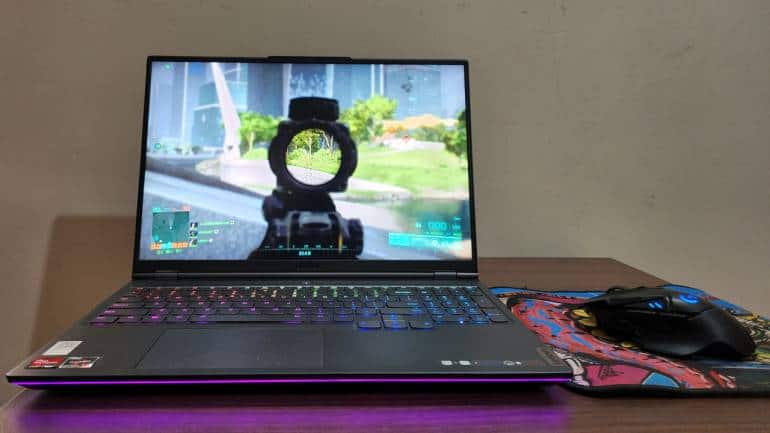 The display has comfortable viewing angles and a comfortable 16:10 aspect ratio. For the most part, the screen produces sharp and crisp footage with vivid colours. You also get X-Rite Pantone factory colour calibration. So far as displays on gaming laptops are concerned, the Legion 7 gets it right in almost every area. The resolution and refresh rate combine to offer a nice balance between stunning visuals and smooth gameplay.

The Legion 7 runs on an older AMD Ryzen 9 5900HX laptop CPU with 8 cores and 16 threads. Additionally, it also opts for an Nvidia GeForce RTX 3080 laptop GPU with 16GB GDDR6 memory. The laptop also came with 32GB of DDR4 RAM clocked at 3200MHz and 1TB of M.2 NVMe PCIe SSD storage. There’s no doubt that the spec sheet here is one of the most impressive we’ve reviewed on a gaming laptop. But how did these specs do in the real world? In Call of Duty: Black Ops Cold War, the Legion 7 managed to offer 140fps in multiplayer mode with the graphics set to High. In Battlefield 2042, we saw 95fps on average on High Settings, while Apex Legends delivered around 150fps on average with the settings maxed out. Valorant hit the 165fps mark on High settings. In Battlefield V, the Legion 7 delivered 125 fps on average on High Settings. It is worth noting that all the multiplayer titles were tested in Quad HD resolution with Ray Tracing turned off.

The two single-player titles we tested were Forza Horizon 5 and Marvel’s Guardians of the Galaxy. The former delivered 70fps on average and the latter managed to average 75fps. Both games were tested in Quad HD resolution and with Ray Tracing set to High. There’s no doubt that the Legion 7 can handle multiplayer titles well, but it could easily deliver upwards of 60fps with excellent visuals thanks to the QHD+ resolution coupled with the HDR support.

While Lenovo claims that the Legion 7 can deliver up to five hours of battery life, which is somewhat accurate. To get a little over four hours of battery life, I had to run the laptop with 40 percent brightness and Nivida Optimus enabled. Additionally, I also switched the power profile and set the refresh rate to 60Hz and resolution to 1080p. I didn’t use the speakers during this time and defaulted to headphones. The apps running included MS Word and Google Chrome with around six to seven tabs opened simultaneously. The numbers may not be as advertised but are still solid for a gaming laptop. The Legion 7’s speakers produce loud and full sound, and, in many cases, you won’t need a headset or external speaker to listen to audio clearly. Additionally, the Nahimic Audio app allows you to customise your audio via an equaliser or choose from multiple audio presets for different tasks. Competitive gaming did require a headset but in most other instances I found the speakers to be quite effective, although the lack of bass does make listening to music less fun. The laptop also comes with a 720p webcam that is adequate for video calls and has a shutter button to the right.

The Lenovo Legion 7 is a no-nonsense gaming laptop, much like the Legion 5 Pro, we tested earlier this year. However, this no-nonsense gaming laptop comes at a hefty price tag, Rs 2,49,990 to be precise. But is it that hefty a price? First off, any RTX 3080 laptop in India is going to cost you upwards of Rs 2 lacs and with 12th Gen Intel laptops already fetching a higher price, you can expect newer models to easily surpass the Rs 3,00,000 mark. But it isn’t just the performance aspect of the Legion 7 that is top-notch, the screen is one of the best I’ve tested for gaming, the build quality is solid, the keyboard is comfortable, and the port selection is on point. Then there’s the design, which allows the Legion 7 to go from subtle to edgy in an instance, thanks to its RGB lighting. I still think battery life and audio could be better, but those are key factors that define a gaming laptop. The keyboard could also be less cramped up. But overall, when it comes to gaming, there is little to complain about. If you are looking for one of those laptops that are touted as desktop replacements, then the Lenovo Legion 7 easily fits that bill. In my view, the Legion 7 undoubtedly offers the best no-compromise approach to gaming you will see at this price.