Has Google finally delivered on the promise of good true wireless earbuds, let's find out?

The Google Pixel Buds Pro are priced at Rs 19,990 in India. And while the price does seem high, Google still finds itself in a pretty competitive market with the Pixel Buds Pro with competition from Samsung, Apple, Sony, Sennheiser, Bose, LG, and Samsung. In our Pixel Buds Pro review, we put Google’s first true wireless earbuds with active noise cancellation (ANC) through its paces and here’s what we think.

The Pixel Buds Pro ditches the design of the Pixel Buds Series-A and Pixel Buds 2020. The buds are now bigger and have ditched the hooks, making them look less refined and bulkier. On the plus side, the ‘Pro’ model retains the dual-colour tone that we saw on the original Pixel Buds. You can opt from Coral, Fog, Charcoal, and Lemongrass colours, although only the Charcoal model is available on Flipkart. The Charcoal version has a dual-tone black and grey finish with the latter covering the touch surface area. Additionally, the touch area also has the Google logo on them. 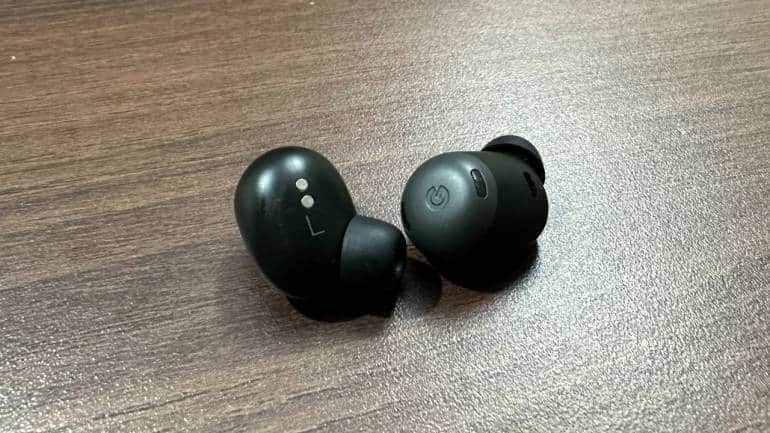 But the unique and bulky design here does have its perks as the earbuds have a snug and comfortable fit. Even while hitting the bumps on the cycle, the earbuds remained steady in their place and ear fatigue didn’t kick in even after four hours of continuous use. The earbuds weigh 6.2 grams each and the case and buds together weigh 62.4 grams. Speaking of the case, the Pixel Buds Pro has a new case which comes in a single matte white finish and a plastic build. The outer surface area of the case is smooth to the touch, while its hinge feels sturdy, giving the case somewhat of a premium feel. On the inside, the case has a matte black finish and can be easily opened with one hand. However, I’d recommend caution while opening the case as the earbuds did tend to fall out easily if given the chance. The case has a USB Type-C port on the bottom, a pairing button on the back, and a status LED indicator on the front. Additionally, the Pixel Buds Pro offer water resistance on both the case and the buds. The earbuds have an IPX4 rating, while the case comes with an IPX2 rating for some water resistance to minor splashes, sweat, and rain. The Pixel Buds Pro feature a comfortable design and solid build.

The touch controls sit on the back of the earbuds and are some of the best we’ve used so far. The touch controls can be used for everything from switching between ANC and Transparency modes and switching tracks to changing volumes and pulling up Google Assistant. 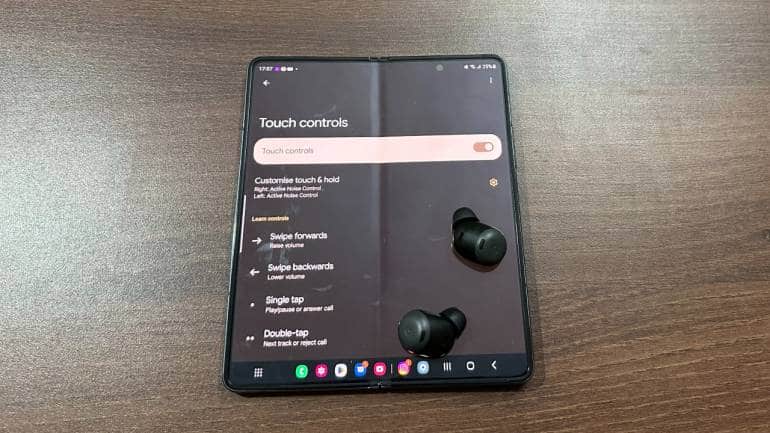 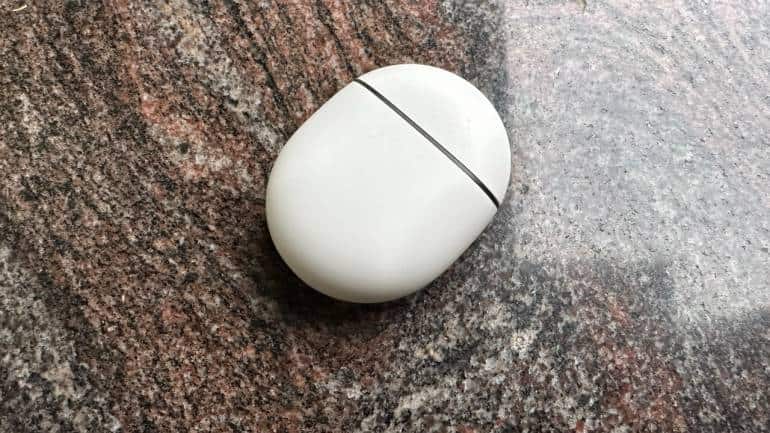 The case supports both wireless and wired charging, through a USB Type-C port. The earbuds also support quick charge, delivering an hour of playback with a five-minute charge and around three hours of playtime with a 15-minute charge.

Google first ANC earbuds are accompanied by the Pixel Buds app. All the features of the Pixel Buds Pro can be accessed through the app. The Pixel Buds App can be used to set up Google Assistant and customise the touch controls. The Sound option allows you to switch between ANC and Transparency mode or turn them off. The Volume EQ also enhances bass and treble at lower volumes, although it doesn’t make that much of a difference. The Pixel Buds Pro offer Fast Pair support on Android, while Audio Switching allows the earbuds to automatically switch between which device is pushing audio through to your Pixel Buds Pro. Audio Switching works for calls and media with compatible devices, although these devices will have to be paired with the same Google Account as the buds. The Multipoint support also works well, allowing the earbuds to connect to two Bluetooth devices simultaneously, switching between them without bringing up the pairing menus. The app also lets you check the eartip seal to ensure a secure fit for the best audio experience. The Pixel Buds app also has Find Device to help locate the earbuds. Google’s Pixel Buds app is impressive and is designed to make the overall experience much more convenient, although the one downside is the lack of an equaliser.

The Pixel Buds Pro use a single 11mm dynamic driver. They also support Bluetooth 5.0 connectivity with SBC and AAC codecs, although the LDAC codec isn’t supported. When gaming I found zero lag and now issues with latency across the board. The sound quality is a major improvement over the Pixel Buds Series-A. The Pixel Buds Pro deliver well-balanced sound with good channel separation, although the soundstage does feel a bit too wide at times, missing out on subtle details in tracks sometimes. Google’s newest premium true wireless (TWS) earbuds favour lower frequencies, giving them stronger and punchier bass. The sound does feel a little muddled through the mid-range, although audio sounded much richer and clearer at higher frequencies. There is an EQ toggle in the app, although users can there’s no room for customisation, which is a shame as it would really help fine tune the sound. However, Google has said they will incorporate a customisable EQ soon, so can’t wait for that. Overall, the sound quality of the Pixel Buds Pro is well above average and I was quite pleased with the buds for music, although they do miss out on Spatial Audio, which is expected to arrive soon, according to Google. The Pixel Buds Pro aren’t particularly loud, but that didn’t seem to be a problem as volume doesn’t distort at higher volumes. For me, 80 percent volume seemed more than enough, and 100 percent felt like overkill. One of the best aspects of the Pixel Buds Pro is that they support active noise cancellation (ANC). You can turn it on by simply long pressing the buds. Noise cancellation on the Pixel Buds Pro peaks at 48dB, which delivers respectable performance both indoors and outdoors, keeping low frequency sound out. While stuck in traffic, most ambient sound was kept out, although the audio from horns and rumbling of nearby engines aren’t kept out as effectively. While travelling by flight, I barely noticed the plane taking off and landing thanks to the noise cancellation on the earbuds. The Transparency mode on the Pixel Buds Pro also works well for the most part, although the voice passing through in this mode is not as clear at times. Lastly, call quality on the Pixel Buds Pro was pretty good. You won’t have any issues taking calls indoors, although that wasn’t always the case outdoors. I managed to take calls while cycling outdoors, which was quite impressive.

The Pixel Buds Pro are undoubtedly a late entrant into the premium true wireless earbuds market. However, with all the things that these earbuds do right, I’d say, “better late than never”. Google’s latest ANC-enabled TWS earbuds are among the smartest out there and pack a tonne of features to make the listening experience more convenient than ever before. They feature excellent battery life, a comfortable design, a secure fit, and a solid build. And despite this being Google’s first attempt at noise cancellation on earbuds, I’d say that the search giant pulls it off without a hitch. The ANC and transparency modes are not class leading but still well-above average. And while sound quality isn’t going to blow you away, it is still respectable in most scenarios. There are some drawbacks here, like the lack of an EQ and no LDAC and aptX codecs support, and the sound, which is good not great, not something you want when buying premium TWS earbuds. All things considered, I think the Pixel Buds Pro are a great addition to the top-end of the segment. The decision to place more emphasis on convenience and a smooth experience will suit average users more than audiophiles, which earns it an easy recommendation in our books. The Pixel Buds Pro are an excellent first attempt at a pair of flagship true wireless earbuds and are only going to get better with time when Google introduces Spatial Audio and a Custom EQ with future firmware updates.
Invite your friends and family to sign up for MC Tech 3, our daily newsletter that breaks down the biggest tech and startup stories of the day
Carlsen Martin
Tags: #Google #Google Pixel #smartphones #True wireless earbuds #TWS Earbuds
first published: Sep 21, 2022 01:54 pm