India's first 5G smartphone gets everything right but camera.

Realme had an excellent year in 2019, experiencing exponential growth in Indian and global markets. Since its inception in 2018, Realme has consistently focused on its smartphone strategy that prioritises “value”. Even its flagship Realme X2 Pro delivered an excellent value proposition. Fast-forward to 2020, and Realme is bringing its “value” strategy to 5G.

Last month, Realme launched its first 5G flagship handset in the form of the Realme X50 Pro 5G. We’ve had the Realme X50 Pro for little over a couple of weeks now and after putting the phone through its paces, here’s how it fared.

Starting with the design, the Realme X50 Pro retains the aluminium-glass sandwich design with the camera module shifted to the corner and the logo at the bottom, same as the Realme 5 Pro. However, the back of the phone gets a new smooth matte finish that looks and feels great in the hand.

Realme has often been guilty of shiny and blingy gradient finishes in the past. But the Realme X50 Pro’s matte glass finish has a touch of subtility and class that’s more indicative of a flagship. We got the Moss Green colour option, but you also get the X50 Pro in Rust Red. Realme claims that the AG Glass solution reduces reflection and gives it the matte lustre.

Build quality on the Realme X50 Pro is pretty solid and the finish doesn’t really attract fingerprints. The colours on the back, change shades depending on how the light hits the phone. The Realme X50 Pro weighs 207 grams and does seem a bit heavy. One the front, the waterdrop notch is replaced with a pill-shaped cutout for the two selfie shooters.

Like the Realme X2 Pro, the Realme X50 Pro also gets a 90Hz display. The X50 Pro sports a 6.44-inch FHD+ Super AMOLED panel from Samsung and a 180Hz touch sampling rate to aid with touch-response. The display features a 20:9 aspect ratio and supports HDR10+ content. The screen boasts a sustained brightness of 495 nits. 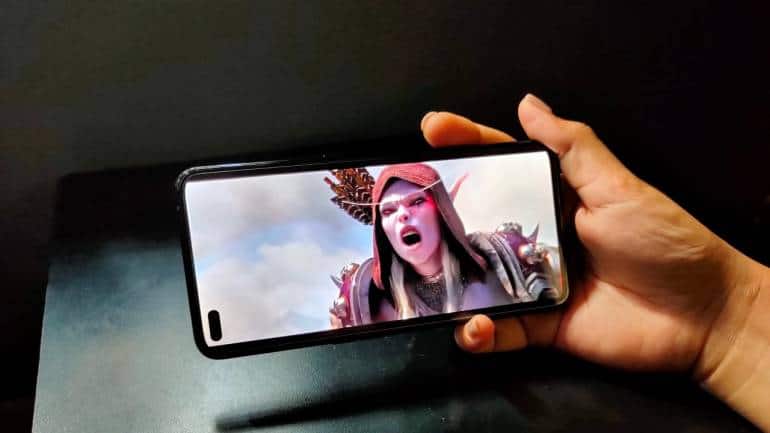 For the price, the screen is pretty good. However, colour appears a bit muted, even in Vivid mode, and comes across slightly dull. In comparison, the screen on the iQOO 3 is miles ahead for content consumption. The X50 Pro features dual stereo speakers; the earpiece acts as the second speaker. The two speakers sound loud, rich and clean, but the bass falls short. The speakers are tuned by Dolby Atmos and support Hi-Res audio playback.

On the performance front, the Realme X50 Pro is as good as it gets. The phone packs a Snapdragon 865 SoC with the latest Adreno 650 GPU. The chipset is paired with up to 12GB of RAM and up to 256GB of UFS 3.0 storage. Our model arrived with 8GB of RAM, which is more than sufficient for day-to-day use and also ensures futureproofing. The new vapour cooling system also aids performance.

The X50 Pro won’t break a sweat running any game. We tried Call of Duty Mobile, Asphalt 9, Darkness Rises, PUBG Mobile and Tekken Mobile on the highest setting possible. After three hours of continuous gaming, the phone didn’t really heat up. In our Geekbench 5 test, the Realme X50 Pro managed a 910 single-core score and a 3,284 multi-core score.

The Realme X50 Pro packs a 4,200mAh battery, which is more than sufficient to get you through a day of average use. After using the device as a daily driver for an entire week, it became evident that this battery wasn’t going to give way before the day ended. Battery life isn’t the greatest on a smartphone at his price, but it gets the job done. One of the stars of the show here is Realme’s new skin, titled Realme UI, which is based on Android 10. Realme UI is a big step up from ColorOS and features a cleaner experience with significantly less bloatware. The new skin on top of Android 10 feels minimal with vibrant colours. The animations are fluid and make the overall software experience really good.

The new UI brings a ton of new features such as focus mode that’s inspired by OnePlus’ Zen Mode, game space for providing that extra boost in performance, screen light effects that highlight the edges of the screen for alerts and calls, always-on display and more. You can also customise icons, text or change the theme altogether from the store.

The Realme X50 Pro has six cameras in total, four on the back and two on the front. The quad-camera setup on the X50 Pro is the same as the X2 Pro, but there are some noteworthy improvements. On the back, the X50 Pro features a 64-megapixel primary sensor, 8-megapixel ultrawide lens, 12-megapixel telephoto shooter and 2-megapixel monochrome lens for portrait mode.

The X50 Pro delivers excellent results in good lighting, offering some good dynamic range, sharpness and colour accuracy. The primary camera does a pretty good job with noise reduction, but there were times where we found it was a bit too much. Aspects of some photos looked more like oil paintings. You also get a feature called Chroma Boost that allows you to increase the saturation and vibrancy in pictures. The ultrawide camera on the Realme X50 Pro is not nearly as good as the main camera but produces excellent results in good lighting. However, it does tend to struggle in low light and other complex lighting scenarios. While Realme claims that the phone can do 20x zoom, we wouldn’t recommend it as it refers to a digital zoom as opposed to optical or hybrid. There is a visible drop in camera quality when you zoom in, but 2x and 5x zoom shots come out pretty well in good lighting. There is a drop in sharpness, but it is still pretty good.

Another big change coming to the camera on the software front is Realme’s new night mode on the X50 Pro, which was exciting considering low light photography was a big weakness for the Realme X2 Pro. However, all the hype dies when you actually try to get photos in low light with night mode; regular AI-scene detection can deliver better results than night mode at times.

And if you think night mode is sub-par on the primary camera, don’t even bother on the ultrawide or zooming into subjects. You need a decent light source to get good results when using night mode. What’s new on the Realme X50 Pro Night Mode is a tripod mode, which delivers excellent results in low light and absolutely no light. The one caveat being is that you have to wait 50 seconds and keep the phone steady throughout. 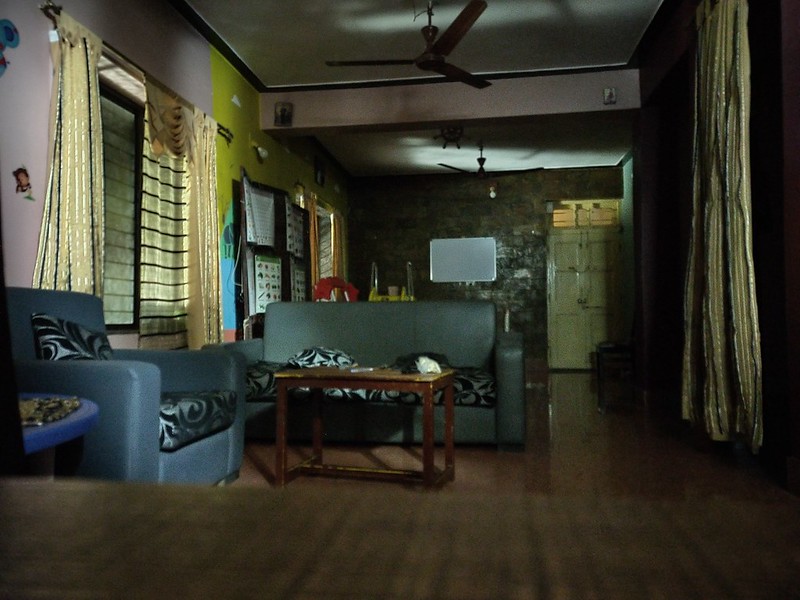 Overall, images captured at night or in low-lit environments are filled with noise, often come out blurry and aren’t very clear. Portrait mode, on the other hand, offers excellent results, preserving fine details on subjects with great background blur and edge detection. When it comes to macro shots, you often get a mixed bag of results, and some trial and error will be required before getting a perfect macro shot.

Unlike the Realme X2 Pro, which can record 4K video at 60 fps, the X50 Pro is limited to 4K video capture at 30 fps. FHD (1080p) video supports up to 60 fps, while you also get Portrait mode for video offering real-time bokeh effect and slow-motion video at upto 960 fps. Additionally, there is an Ultra Steady mode, but it is limited 1080p video capture. You will also have to default to 1080p at 30fps if you want to record videos in ultrawide mode.

Realme doesn’t offer Optical Image Stabilisation (OIS) on any of the four camera lenses; instead, you get gyroscope-based Electronic Image Stabilisation (EIS). When using the FHD 60 fps mode, you do get good stabilisation with Ultra Steady mode, but at 4K resolution, you need to keep the phone steady to get usable videos. We also noticed that the colours were oversaturated and overblown, especially when dealing with skin tones.

On the front, Realme has opted for a 32-megapixel primary shooter and an 8-megapixel ultrawide sensor. You can record 1080p video on the front at 30 fps, and video stabilisation is implemented on both front cameras. Additionally, you also get Portrait mode for video and 120fps slow-motion recording. In good light, both the primary and ultrawide sensors on the front do a pretty good job; photos even look good at night. Again, Portrait mode on the front camera is a real strong suit on the X50 Pro with well-defined edges and good background blur, and it is no different with Portrait video. The front camera doesn’t beautify selfies and offers balanced exposure and good details. The part where the front camera system tends to struggle is finding focus and dynamic range.

Overall, camera performance on the Realme X50 Pro is a bit of a disappointment and in some respects, falls short against the Realme X2 Pro. However, there’s some pretty impressive camera hardware under the hood here, and Realme has a lot to work with. So, a lot of these camera issues can be improved with software. Some of these updates may already be available for some users or will be available soon.

The Realme X50 Pro hits a lot of the right notes in terms of battery life, software, design, display, performance and connectivity. Although camera performance is pretty average, most of those issues can be corrected with software updates. The one thing we don’t see changing is uniformity in camera performance, which seems to be a big trade-off when you go from flagship to flagship killer. 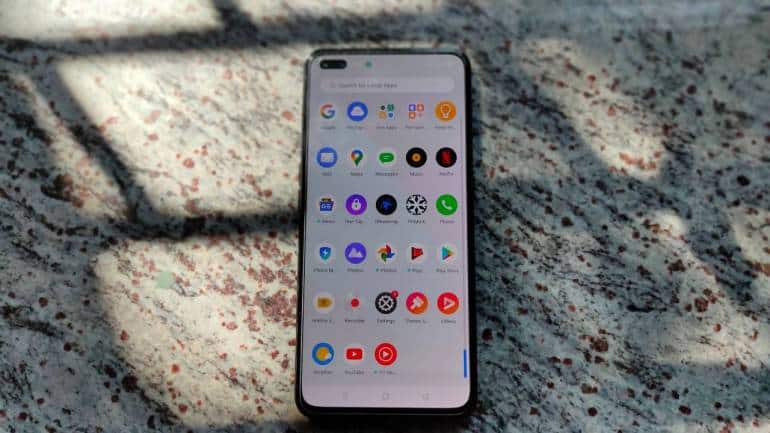 At a starting price of Rs 37,999, the Realme X50 Pro offers excellent bang for your buck. The company has done a lot of things right and very little wrong. There’s not a lot to complain about, and the things we do complain about can easily be fixed with software updates. As far as first 5G phones go, this is definitely a hit.