Upcoming Event:Join us for New HorAIzon from Oct 6-7, 2pm and be a part of exciting conversations on tech & innovation
you are here: HomeNewsScience

The Hubble Space Telescope is a project of international cooperation between NASA and ESA (European Space Agency).

NASA has shared fresh images of Jupiter taken from the Hubble space telescope. The pictures have captured the solar system's biggest planet at mid-northern latitudes as a bright, white, stretched-out storm travelling around the planet at 350 miles per hour (560 kilometres per hour).

Trailing behind the plume (a long cloud of smoke) are small, rounded features with complex red, white, and blue colours in the near-infrared light image. NASA said that the plume erupted on August 18, 2020, and ground-based observers have discovered two more that appeared later at the same latitude. 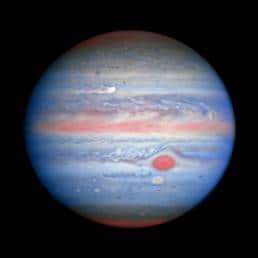 An image of Jupiter taken by NASA's Hubble Space Telescope in ultraviolet, visible, and near-infrared light on Aug. 25, 2020.

The image also provides a good look at the Oval BA, which has been nicknamed Red Spot Jr. It's the storm sitting just below the Great Red Spot.

"For the past few years, Red Spot Jr. has been fading in colour to its original shade of white after appearing red in 2006. However, now the core of this storm appears to be darkening slightly," NASA said in a statement.

The icy moon Europa is also visible to the left of Jupiter.