The assembly election result in Delhi falls into place like a piece of a puzzle, confirming that India has entered into a phase of split-voting

Months of politicking in Delhi concluded on February 11 when the Aam Aadmi Party (AAP) retained power in the national capital with a thumping majority.

In what came as a near-repeat of its 2015 election performance, Chief Minister Arvind Kejriwal’s party won 62 of the total 70 Assembly seats in the national capital territory. Its main challenger, the Bharatiya Janata Party (BJP), won the remaining eight constituencies.

Beyond the tally — BJP’s hidden surge

But, a closer look at the results data from the Election Commission (EC) reveals a surge in BJP’s vote share. The saffron party secured around 38.5 percent votes. Remember, that is only from the 66 seats it contested. Its allies Janata Dal (United) and Lok Janshakti Party (LJP) contested from two seats each and secured 0.9 percent and 0.3 percent votes, respectively.

BJP-led National Democratic Alliance (NDA)’s combined vote share stood just under 40 percent. This is a major increase from the 32.3 percent votes BJP had secured in 2015 (across 70 seats).

On the other hand, the Indian National Congress and AAP lost their vote share. AAP went from 54.5 percent in 2015 to 53.6 percent. The Congress’ share dropped more drastically from 9.7 percent to 4.26 percent.

Also read: Congress+ loses deposit in 67 out of 70 seats

The significant rise in BJP’s vote share has become a talking point for political experts as the saffron party had run a faceless campaign. BJP had not named a chief ministerial candidate despite its one-on-one contest against AAP, which has an undisputed and popular leader in Kejriwal.

BJP had also largely relied on nationalism even as AAP used its claims of development and initiatives as its poll plank.

The election result came as a major disappointment for BJP. Having won all of the Capital’s seven parliamentary seats in the 2019 Lok Sabha elections, the party was optimistic about its chances.

The party sweeping Lok Sabha polls in May 2019, but failing to get double digit assembly seats just nine months later, is not surprising. This is one of the key takeaways from the Delhi election. The Delhi election result now falls in place like a piece of a puzzle.

Voters in India are not shying away from voting for different political parties at different levels of governance — perhaps more than ever before. Elections held a year before, those held along with, and held after the 2019 Lok Sabha polls, clearly attest to this voter behaviour.

This is similar to what political scientists call ‘split-ticket voting’, in which people vote for candidates from different political parties at different levels of governance. This term is generally used when such a split happens in the same election. An example of this would be the way people voted in Odisha during the simultaneous state and Lok Sabha polls in 2019.

Karnataka: BJP, challenging the Siddaramaiah-led Congress there, had emerged as the single-largest party with 104 seats. Congress and the Janata Dal (Secular) — contesting separately — had won 78 and 37 seats, respectively.

However, a year later, BJP polled 51.7 percent votes in the Lok Sabha election and bagged 25 of the state’s 28 seats. Congress and the JD(S) — contesting in an alliance this time — won one seat each. An Independent candidate, backed by the BJP, had won one seat. Congress and JD(S)’ vote share fell to 32.1 percent and 9.7 percent, respectively.

Chhattisgarh: The Raman Singh-led BJP government lost the state in December 2018. The party won just 15 of the 90 seats. With 68 seats, Congress secured a two-thirds majority. Congress had polled 43.9 percent votes, ahead of BJP’s 33.6 percent.

Around six months later in the parliamentary election, the pendulum had swung the other way. With a 51.4 percent vote share, BJP bagged nine out of the 11 seats in the state. Congress’ vote share stood at 41.5 percent.

Madhya Pradesh: This state in central India was also lost by the BJP. The party won 109 seats, just behind Congress’ 114. The two parties polled 41.6 percent and 41.5 percent votes, respectively.

Less than a year later, BJP won 28 of the 29 Lok Sabha seats with 58.5 percent vote share. Congress won one seat, with a state-wide vote share of 34.8 percent.

Rajasthan: In December 2018, Congress clinched the state by winning 99 seats with a 39.8 vote share. BJP finished second with 73 seats and 39.3 percent of the votes.

In the Lok Sabha polls, the saffron party won 24 of the 25 seats in the state. The remaining one seat in Rajasthan was in fact won by its ally Rashtriya Loktantrik Party (RLP).

Congress (contesting in alliance with the Telugu Desam Party) had won 19 seats. However, its vote share was 28.7 percent. BJP, with a vote share of 7.1 percent, had managed to win just one seat.

In the general election, TRS won nine of the state’s 17 Lok Sabha seats and had a vote share of 41.7 percent. Congress won three seats with a marginally improved vote share of 29.7 percent.

However, the BJP clinched four parliamentary seats with its vote share jumping to 19.6 percent.

Mizoram: Zoramthanga’s Mizo National Front (MNF) defeated Congress in late 2019 in the state election. MNF and Congress had won 26 and five seats, respectively. The BJP had won just one seat. The Assembly polls for Arunachal Pradesh, Andhra Pradesh, Odisha and Sikkim were held simultaneous to the Lok Sabha polls in 2019. Voters in these four states polled for both levels of governances on the same day.

BJP not only retained power in Arunachal Pradesh with a two-thirds majority, but also won one of the two Lok Sabha seats. BJP’s vote share in the state was 51.3 percent, which spiked to 58.9 percent for the parliamentary election.

In Andhra Pradesh, voters opted for YS Jagan Mohan Reddy’s YSRCP over the incumbent Telugu Desam Party (TDP), in both polls for the Centre and the state. The vote share did not deviate much as voters opted for the challenger and gave YSRCP over two-thirds of the seats, at the central as well as in the state polls.

The Sikkim Krantikari Morcha (SKM) not only stormed to power in Sikkim, but also won the lone Lok Sabha seat in the Northeast state. While its vote shares in the two polls were identical, its rival Sikkim Democratic Front (SDF)’s vote share was down to 44.2 percent in the Lok Sabha polls as compared to 48 percent in the state election.

Odisha witnessed a major electoral phenomenon. Voters chose Chief Minister Naveen Patnaik’s Biju Janata Dal (BJD) in the state for a fifth consecutive term. But the Members of Parliament (MPs) getting elected from the BJP was disproportional to its Assembly polls performance.

Haryana: BJP won all of the 10 Lok Sabha seats in Haryana and secured a 58.02 percent vote share. Congress’ vote share was 28.4 percent.

In the assembly election, BJP failed to win a majority on its own. The saffron party won 40 of the total 90 seats in the House. Congress won 31 seats. BJP secured 36.5 percent votes to finish ahead of Congress’ 28.1 percent.

Maharashtra: The BJP-Shiv Sena alliance had won 41 of the 48 seats (about 85 percent seats). Together their vote share was over 50 percent.

However, in the assembly election held six months later, it fell to around 42 percent.

In terms of the seats, the BJP-Sena pre-poll alliance had secured 169 of the 288 seats (about 58 percent seats).

Jharkhand: The BJP had won 11 of the 14 parliamentary seats in the state. Its ally All Jharkhand Students Union (AJSU) had won one seat. The Congress-Jharkhand Mukti Morcha (JMM) combination won the remaining two. BJP’s vote share itself was about 51.6 percent.

However, in the assembly election, BJP managed to win just 25 of the total 80 seats. Its vote share plummeted to 33.4 percent. On the other hand, the Congress-JMM alliance bagged 46 seats. Their vote share jumped to 32.5 percent votes from a combined vote share of 27.4 percent.

Now, the Delhi election result only confirms the pattern. BJP had won all seven parliamentary seats in the national capital with a vote share of 56.6 percent.

It is to be noted that the proportion of seats contested by a political party may have changed marginally between the state polls and the Lok Sabha election as a result of alliances. 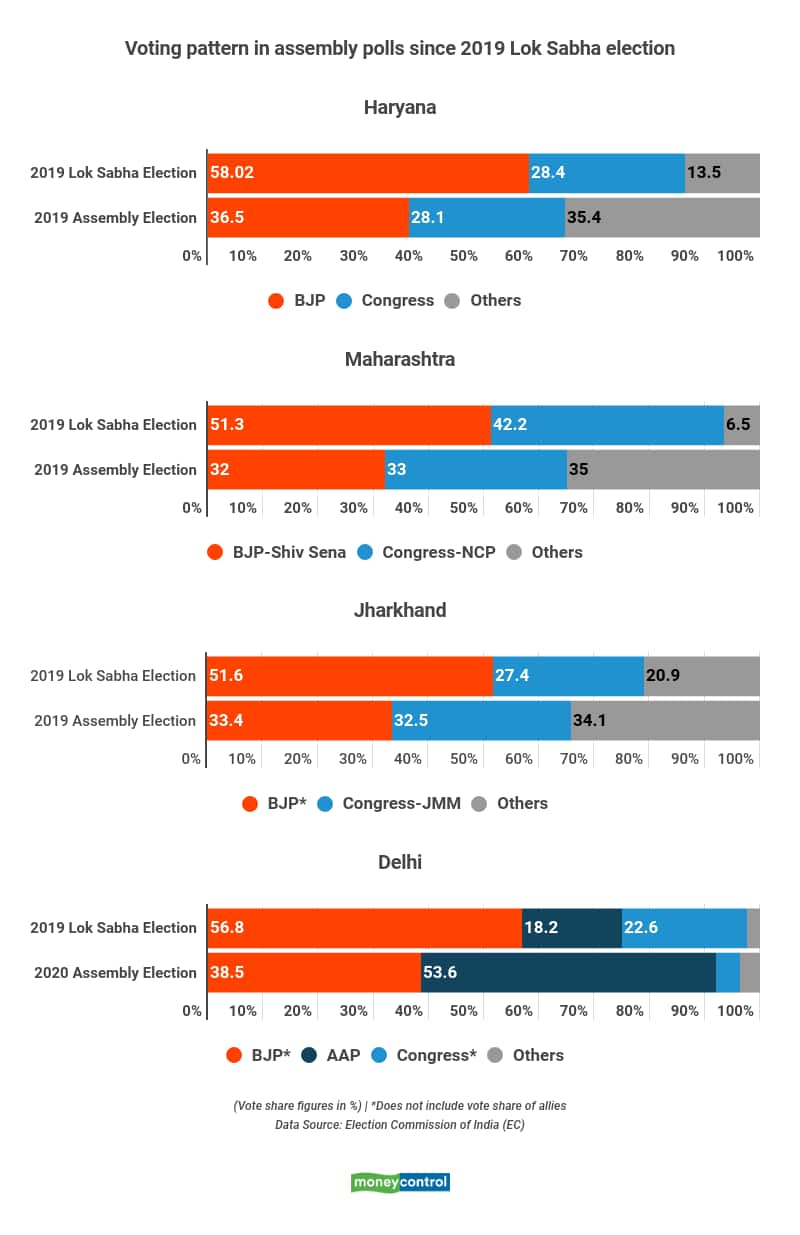 Throughout the time period mentioned above, Prime Minister Narendra Modi’s personal popularity remained high. This was evident from the Lok Sabha polls, in which BJP won 303 out of the 543 seats on its own. Opinion polls have also suggested that PM Modi leads with a big margin on that front.

According to the India Today Group-Karvy Insights’ ‘Mood of the Nation’ survey from January, at least 34 percent respondents believed that Modi is the best prime minister of India. Indira Gandhi and Atal Bihari Vajpayee were a distant second and third, respectively.

What it also means is that people in states where the BJP is a contender, tend to vote differently when PM Modi is on and off the ballot.

Why this could be happening

In an article for ThePrint in December 2019, psephologist and founder of socio-political organisation Swaraj Abhiyan, Yogendra Yadav, had written earlier that split-ticket voting is a “sign of voters’ sophistication”.

Political pundits have explained that Indian voters voted the same way in the central and state elections since Independence till about the 1970s. In the next phase, they voted in assembly elections as if their vote was going to decide who governs the Centre.

In an interview with Moneycontrol during the 2019 Lok Sabha election, NDTV co-founder and senior journalist Prannoy Roy had said: “The single biggest change is that our voters are much more discerning and smarter than even a couple of decades ago.  No longer can our politician fool our voters easily – they have to work hard at it!  Our voters are no longer taken in by flamboyance and oratory – they demand real development and results on the ground, in their village or locality.”

This leaves us with a question: will the split-ticket pattern continue till the Bihar Assembly election scheduled for later this year? And, if so, how will political parties manoeuvre to avoid facing heat or take advantage of it, over the next eight months.