Education and health remain the key expenditure focus. However, the deshbhakti slogan and 75-week celebrations for Independence Day show that AAP is taking a leaf out of the BJP playbook

Delhi Finance Minister Manish Sisodia has presented the budget for the financial year (FY) 2021-22. The Gross State Domestic Product (GSDP) of Delhi contracted by 5.68 percent during 2020-21 mainly due to the economic slowdown fuelled by the COVID-19 pandemic.

A budget of Rs 69,000 crore has been presented for FY22, which is 17 percent higher than the revised estimates for FY21. The budget is proposed to be mainly financed from the state’s resources.

About a quarter of the expenditure is to be incurred on education (Rs 16,377 crore) and another 14 percent on health (Rs 9,934 crore), which have been the core pillars of the ‘Kejriwal Model of Governance’.

A total of Rs 17,201 crore has been allocated for infrastructure creation to prepare Delhi for the future increase in population.

The Aam Aadmi Party (AAP) government has laid special emphasis on the education and health sectors since coming to power on its own in 2015. The creation of mohalla clinics and revamp of the government schools have won it accolades and votes.

While on an average, states in India spend 4.9 percent of their expenditure outlay on health, the Delhi government spends more than twice - 12.5 percent.

Similarly, Delhi’s expenditure on education as a ratio to aggregate expenditure (24 percent) is much higher than India's average of 15 percent.

The poor have immensely benefited from this social sector focus and have resoundingly backed the AAP in the 2020 elections, giving Kejriwal a second term. Till here everything looks fine and AAP is seen playing to its strengths. 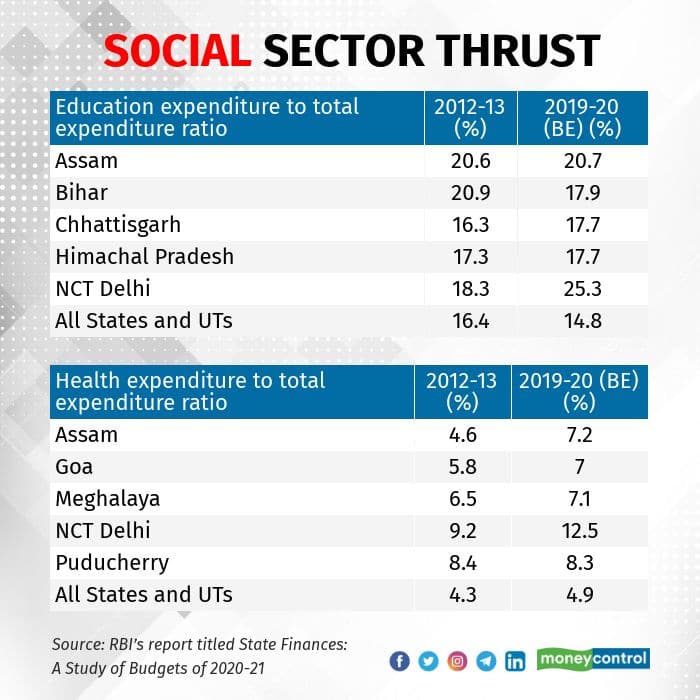 After sticking to the social sector, the AAP budget deviates from its main agenda and appears to be one from a state government run by the BJP.

Sisodia called it a "Deshbhakti budget". The national capital will see a 75-week long celebration - starting March 12 this year till August 15, 2022, to mark the 75th Independence Day.

The Budget promises that by 2047, every person in Delhi will be earning as much as every person in Singapore. It contains provision to reform the curriculum of schools to make sure every student becomes a patriot (Deshbhakti Pathyakram).

About Rs. 25 crore has been allocated to promote Yoga in the city; yoga trainers will be made available across the city.

The AAP seems to have learned the tricks of the trade from the BJP in headline management. The Deshbhakti Budget catchline is akin to the Aatmanirbhar Bharat slogan of the BJP which has gained significant traction in the media. The AAP has ensured its budget gets adequate coverage.

The deshbhakti budget has been coined by the AAP to counter the nationalism plank of BJP. The Modi government has announced grand celebrations for the 75th year of independence and the AAP doesn’t want to let it appropriate the legacy of the freedom fighters.

The per capita income like Singapore by 2047 is too long a shot in the dark like some of the targets set by the BJP. The inspiration seems to have come from the Prime Minister himself. Recently in a rally at Brigade Ground, Narendra Modi promised that in 2047, West Bengal will once again rule the country.

These promises give an impression to the public that the AAP has presented a futuristic budget. However, in the absence of a blueprint, it just presents another pie in the sky target, similar to the doubling of farmers’ income by 2022.

Why is AAP copying BJP’s jingoism and symbolism, which have become the key component of its campaign and narrative?

After a second term in Delhi, the AAP now has plans to expand its footprint nationally. It has announced that it will contest the state elections of Uttar Pradesh due next year along with Punjab, Goa, and Uttarakhand.

The AAP doesn’t wish to provide any chance to the BJP to paint it with the same anti-national brush it has successfully employed on many opposition parties. The party is showing that there is no harm in learning from a leader in the game, even though it’s your opposition.

Further, if something’s (nationalism) working with the voters, why not adopt it? In Delhi, it had stayed clear of the anti-CAA protests at Shaheen Bagh and reaped electoral dividends. It is adopting a very practical approach.

However, it needs to be cautioned, that parties which have copied BJP’s model like soft Hindutva have failed in the past.

In the end, the Delhi budget has a bit of both, economics and politics - the two are inseparable in a country like India.
Amitabh Tiwari is a former corporate and investment banker-turned political strategist and commentator. Twitter: @politicalbaaba. Views are personal.
Tags: #AAP government #Arvind Kejriwal #Chief Minister Arvind Kejriwal #Deputy Chief Minister Manish Sisodia
first published: Mar 11, 2021 09:06 am