Review: The Big Bull | Why we love on-screen rogues

'The Big Bull' is now available on DisneyPlusHotstar. Here's a look at the plot, the acting, the music and the comparison with 'Scam 1992'.

We are a generation that is inspired by Steve Jobs, Bill Gates, Warren Buffett and Richard Branson. We want to have the magic touch of Rakesh Jhunjhunwala with our money, and hope our children will turn out to be as rich as Jeff Bezos.

But we are also awed by the lives of Charles Sobhraj, Joe Exotic, Imelda Marcos and, yes, Harshad Mehta.

Just months after SonyLIV streamed a ten-part show on Mehta (Scam 1992), DisneyPlusHotstar has released The Big Bull, a feature film inspired by Mehta's life. Does it feed our fascination for the bad boys?

The bad boy in this film is Hemant Mehta (Abhishek Bachchan), a young man who changes 11 jobs before he figures out that he has a nose for finding stocks that would be profitable.

As the film progresses, it becomes clear that Hemant doesn't think twice before using people like his friend Hari. He also calmly bribes the banker who tells him about a two-week reconciliation period when banks borrow from other banks - he calls the bribe an anniversary gift before getting a Rs 2 crore cheque, and even the bear market leader...

There's just so much to unpack here... What we learnt over ten episodes in Scam 1992 is crammed into 155 minutes in The Big Bull.

ALSO READ: Abhishek Bachchan on 'The Big Bull': So many protagonists in Hindi cinema these days are grey characters

While we slowly began to understand and appreciate Pratik Gandhi (also based on Harshad Mehta) in Scam 1992, Abhishek Bachchan’s Hemant begins on a menacing high, slowly walking towards the government agents threatening his brother and telling them, ‘Agar achhi offer nahi de sakte toh achhi rai toh do (If you cannot make a good offer, at least offer good advice).’

If Pratik Gandhi’s version was like a slow starting avalanche, Abhishek Bachchan’s maniacal laugh makes your heart drop to your stomach right away. You can smell doom instantly.

Comparison between the two men who played characters inspired by Harshad Mehta is natural. But while the series Scam 1992 takes its time to show us how this man from the chawl moves up in life (we see him trying on a new suit, buying an office) before following his downfall, the film checks all the boxes quickly. It seems that the filmmaker does not want you to like Hemant Mehta at all. You just hear the Michael Douglas dialogue, ‘Greed is good’ and watch the inevitable downfall of a man who flew too high, too fast.

Abhishek Bachchan carries the film on his shoulders, but there's no hiding from the fact that there's just too much crammed into too short a time

Yet Abhishek Bachchan is so likeable here that you don’t care that the script does not allow anyone else to steal even half a scene.

Sohum Shah plays Hemant’s constantly fearful brother but he doesn’t have a strong role like he did in Tumbbad.

Ileana D'Cruz plays the journalist Sucheta Dalal, and the kindest thing one can say about that is there’s nothing understated about her. (I am alarmed at how little filmmakers understand journalism as a profession.) Scam 1992 gives a similar trope treatment, but Shreya Dhanwanthary did a far superior job playing the journalist (I had to Google her name, though).

Abhishek Bachchan has horrified me in the past with his Drona, Players and Main Prem Ki Diwani Hoon type movies, but give him Guru, Ludo, Bluffmaster and even Sarkar, and you will see why he just shines. Here, he carries the film on his shoulders.

You may find his laugh a tad overdone, but he makes it up by romancing his girl (played sweetly by Nikita Dutta) rather nicely. His sidelong glances at her, his smile, the way he pays off the entire crowd at the chaat stalls so she can eat in peace are rather sweet examples. His earnest Hemant earns him extra points, especially when he’s shown sitting down at the kabadi shop poring through annual reports. 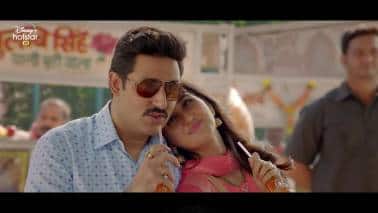 Abhishek Bachchan and Nikita Dutta in 'The Big Bull'.

Whereas Pratik Gandhi’s Big Bull operated quietly (he just pays the dealer for the car he fancies more than the asking price) Abhishek Bachchan’s Bull simply rampages through anything standing in his way (when a rival appreciates his fancy car, he says, ‘Want it? Take it. I’m buying a couple more!’).

Both the series and the film concentrate so much on the myth of the Big Bull that they do not show us how people lost their livelihoods and lives because they followed Harshad Mehta. Scam 1992 mentions it more but Pratik Gandhi’s character does not show remorse. After all, they made money when they followed me - I never asked them - then why blame me if they lost money? Abhishek Bachchan’s character gets no chance to redeem himself by feeling for those who lost money…

Apart from Abhishek Bachchan, the rest of the film especially the overly intrusive music makes you cringe. Blame it on Gully Boy or the fact that Abhishek Bachchan likes hip-hop, the rap song seems anachronistic and very, very annoying. So does the romantic number. I would have been happier if they had invested more in the ways of the CBI/Income Tax enquiries or in the story of the journalist investigating the bank scam instead.

Most of us lead very boring nine to five lives, and a glimpse of how men like Harshad Mehta gamed the system and got away with it for a long while will continue to fascinate us. Warren Buffett also says, 'When it's raining gold, put out the bucket, not the thimble'. I'm sure if someone else were to make another film or series on the same man, same journalist, the audience will be more than happy to watch.

One inspiring moment that everyone should take away from this film is the anecdote of the lift operator. ‘If you want to buy a car, invest in tyres.’