When governments rebuild their economy, it is likely that clean energy may take a backseat.

As the entire country observed 'Janata Curfew' on March 22, there was a significant dip in air pollution levels across the country. Delhi, Bengaluru, Kolkata and Lucknow witnessed clean air as the Air Quality Index stayed within two digits.

According to data by the Central Pollution Control Board, air pollutants in Delhi was at 126 micrograms per cubic metre at 1 AM on March 22, which nearly halved by 1 PM. However, pollution levels in Ghaziabad, Greater Noida and Noida remained at 'poor' and 'moderate' despite shutdown of commercial establishments and industrial activities.

Kolkata recorded a significant improvement in air quality.  The PM 2.5 air quality index (AQI) was 'satisfactory' in all the automated air monitoring stations in the city during the day, an official of the West Bengal Pollution Control Board said. 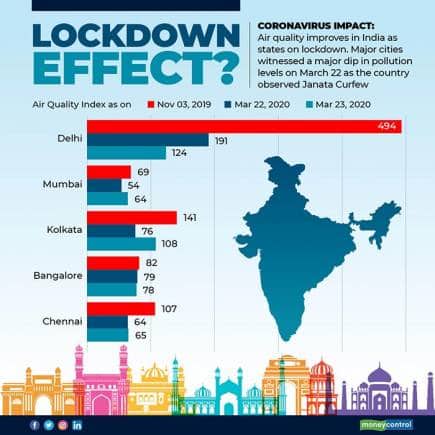 "The reduction of private vehicles, other non-essential transportation, no construction activity have all contributed to improvement in air quality. However, the other contributing factors like landfills, waste to energy plants, thermal power plants continue to bear on the pollution load," said Kanchi Kohli, researcher at Centre for Policy Research.

As the COVID-19 crisis persists, the pollution levels may further reduce to lower levels but the long term issue of climate change persists. When governments  rebuild their economy, it is likely that clean energy may take a backseat.

According to a report, Ministry of Heavy Industries and Public Enterprises has prepared a list for petrol, diesel and electric vehicles to be airlifted from China. However,  electric vehicle (EV) manufacturers may have to stop pause production in April and May since China is the only source for some of the components.

In the current normal, environmental concerns were the collateral. According to Kohli, government spending and business practice will both need to build greater social justice, environmental consciousness and lower ecological footprint as a core ethic. India can no longer rely on technological solutions and mitigation measures alone.

It remains to be seen whether the current crisis will have a long term impact on change in business operations with greater sensitivity towards environment or will it be business as usual once the crisis subsides.
Pramiti Lonkar
TAGS: #coronavirus #policy #pollution
first published: Mar 24, 2020 03:08 pm