Prosus Ventures, an investor in some of India's prominent consumer tech unicorns such as Swiggy, Meesho, PharmEasy and Byju's, is now seeking deals in the business-to-business (B2B) and software as a service (SaaS) space as well, a top executive said, signifying a shift in strategy.

B2B and SaaS firms spend lesser money and generate revenues early on, factors that could be playing on Prosus' (previously Naspers) mind as caution kicks in after a year of excess in India's startup ecosystem. The global technology investment firm has also started participating in early-stage funding, although it insists that cheque sizes of $50–60 million and above remain its sweet spot.

In an interview with Moneycontrol, Ashutosh Sharma, Prosus Ventures’ Head of Investments for India, talks about corrections in start-up valuations, the business models of its portfolio firms Meesho and PharmEasy and its investment strategy.

In 2022, Prosus Ventures has already invested in 11-12 start-ups such as Fashinza, ElasticRun, Vegrow, Cashify and Detect Technologies. All of them, despite being tech-enabled, are in different sectors. What are you looking for?

Unlike the previous downturns, I think this time geopolitical uncertainties are making things even more complex. We are taking this time off, as are many investors I spoke with, so I believe that's the mindset we are in. Having said that, because we are a balance sheet-based investor rather than a fund, we can really have a long-term view on opportunities. We don't need to return money to LPs anytime soon. So, if the downturn lasts one or two years, we're kind of okay with making those investments, that’s why we have announced a bunch of them over the past five or six months. So, while we are quite bullish about India in the long term, we are taking a slightly more conservative stance in the mid-term due to rate hikes and geopolitical uncertainty.

Now, to your question on what kind of investments are a good mix, we never engaged in B2B or Software-as-a-Service (SaaS) before because we were always recognised for our consumer tech focus. Additionally, based on our institutional knowledge, all of our successes have involved consumer technology, so we felt very at ease placing bets there. Over time, we realised that there are large value creation tools available in other sectors as well. And I think I accept that we are perhaps a little late to the party in some of these cases.

We started doing some SaaS deals last year and early this year. We've already completed two deals and are about to announce a third. We can clearly see that India has turned the tables when it comes to building in India, for the rest of the world. And I think SaaS was very clearly a sector that was riding on it... So, while I agree that we are late to the SaaS party, we will continue to do more SaaS investments. 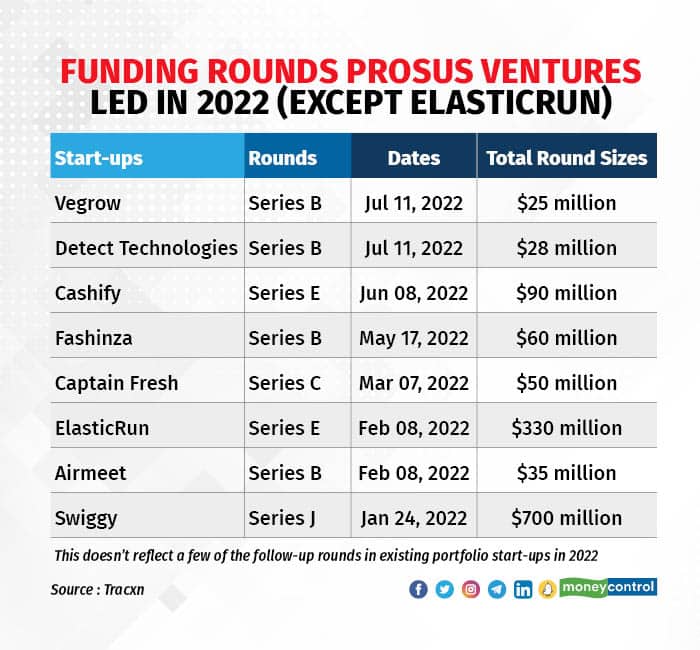 Ecosystem experts are expecting further corrections in start-up valuations. Do you see the same happening?

So, there are two ways to look at this. Yes, from a macroeconomic standpoint, we expect more rate hikes, which will inevitably result in some correction. So, I believe that if you look back at last year, you will notice a lot of things. Most start-ups do not require funds right away, and as a result, there is no need for a correction. Especially in private equity. You can be corrected every day if you are public. It will be interesting to see what kind of correction we see if the downturn continues for a longer period of time. I would estimate that 80–90 percent of Indian start-ups are sorted because there was enough money raised last year. So, the correction might not appear right away.

The business models of the operationally bigger start-ups are beginning to reveal cracks. From what is in the news and what we have heard from people, a few of your portfolio companies, such as Meesho and PharmEasy, are having difficulties. Prosus made a few late-stage investments in them. What was the thought process?

By the way, any rumours you may have heard regarding Prosus funding a fresh round in Meesho are untrue. None of it is happening. Although Meesho is not actively raising money, they are in a strong position. Unfortunately, there are many rumours circulating about the company.

The burn has decreased significantly, and they are sitting on a lot of cash. So, we're very hopeful. Even though Meesho only competes in one category at the moment and processes 2.5 million orders daily — a staggering number considering that they just sell clothing — they are one of the largest companies in India in terms of orders per day. Consequently, we're working to add new categories, etc. So I'm very hopeful and excited.

PharmEasy, as you know, I think it got caught in a little bit of a tricky situation. They were about to go public, so we were hoping that in the IPO, we'd raise some primary, a lot of it secondary, and then on the back of that primary would continue to build business. Now, since that has not happened, we are taking a sort of a private round, we're considering that and, we will be very supportive of that private round and contribute to it.

So, how much time is it taking on an average right now to start conversations and close the deals?

It completely depends on the cheque size. So, a $200 million cheque would be pretty substantial. For a lot of times, I would say three months, maybe even more than four months. However, if the cheque is only for $5 million to $10 million, we can make a decision much more quickly. And it's not just because there is less capital at risk, but because it’s probably at a very early stage. There isn't much due diligence to be done when I'm investing $5 million in two companies at this early stage. For us, it really is based on the size of the cheque.

Which sectors do you think these big cheques are going to?

Sincerely, I lack a ready opinion on this. So, I don't think I can respond to your question very intelligently. Again, it depends on the sectors. If it's a start-up, they won't need a $50 million cheque right away; instead, they'll just need a small one to test the idea, etc. So, consumer and B2B brands in SaaS, some of those established sectors… you will see us doing more deals in the early stages in these sectors.

Last year, quick commerce was the hot sector, creating a battleground of sorts among Zepto, Blinkit and others. Now, they have started diversifying and adding new offerings. Where do you see the quick commerce game ultimately going in India?

Delivery in ten minutes? I don't see anyone making that claim anymore since I believe that recalibration has already begun. Or maybe someone does, or maybe I just use Swiggy Instamart... As for your sort of larger question, I believe that due to the scale of the industry, the quick commerce category has a better possibility of adding value than the food category as a whole. Zomato and Swiggy both had to establish that habit first in the food space. They opened up the entire menu for us, and we received ratings, reviews, and so on. Because they started from scratch, they were also establishing the market at the same time, when quick commerce companies arrived. These existing players have already developed an economic model that will allow the quick commerce companies to serve my basket in 30 minutes. I mean, there’s no ceiling to the market. So, I am very, very positive overall.

Which sectors do you think will be hot over the course of, say, the next 12 to 18 months?

In terms of late-stage, I would say that I still think it is SaaS. You will witness a lot more in India because, as you pointed out, there are many benefits in terms of talent, cost, and other factors. There have already been enough successful Indian businesses, and the world needs more of them, so that will excite even more people.

There seem to be a lot of new businesses catering to consumers, in my opinion. Rapido is slightly new to what Uber and Ola are doing. So, in all of commerce, you will see new business models come and so I think those will be very exciting to watch. Like CityMall or DealShare is a new business model to receive cash, right. I believe it will happen a lot in the consumer space. I believe the ecosystem is ready, not only for EVs, but in general. The crude price trend has kind of indicated that we cannot rely on daily fuel imports costing this extremely large sum of money. So, I think that alone will give a nice push to EVs. I'm not sure what will be successful, whether it's a brand or infrastructure, or what kind of play, but I believe something will be interesting to watch. And then I believe we will see a lot of B2B marketplaces for India, as a new concept. These marketplaces will be close to the interest of importers and exporters.