Heard of Dolly Khanna? This Chennai-based investor has an eye for multibaggers

Dolly Khanna, along with her husband Rajiv Khanna who has been her investment advisor, raised stake in 9 out of 20 stocks in her portfolio. She booked profits in 8 stocks while maintained a stake in 3 companies.

The Chennai-based couple Dolly Khanna and Rajiv Khanna have a knack for spotting multibagger stocks. Rajiv Khanna, who invests in the name of his wife Dolly, has a portfolio of 20 securities at the end of June quarter, according to data compiled by Capitaline.

Dolly Khanna, along with her husband who has been her investment advisor, raised stake in 9 out of 20 stocks in her portfolio. She booked profits in 8 stocks while maintained a stake in 3 companies.

According to a report, Rajiv Khanna started investing in the market back in the year 1996 with an initial investment of Rs 1 crore which now worth over Rs 400 crore.

Some of their investments such as Nilkamal, Sterling Tools, Nandan Denims rose 100-600 percent in the last five years while Thirumalai Chemicals, Dwarikesh Sugars, Ruchira Papers vaulted over 1000 percent in the same period.

The chunk of the money has been invested in mid and smallcap names. There were two additions in the June quarter where the holding increased more than 1 percent include companies like Rain Industries (1.27 percent stake), and Shreyans Industries (1.09 percent stake).

However, there were two such companies where the stake fell below 1 percent which include names like Nahar Industrial Enterprises, and ADF Foods. 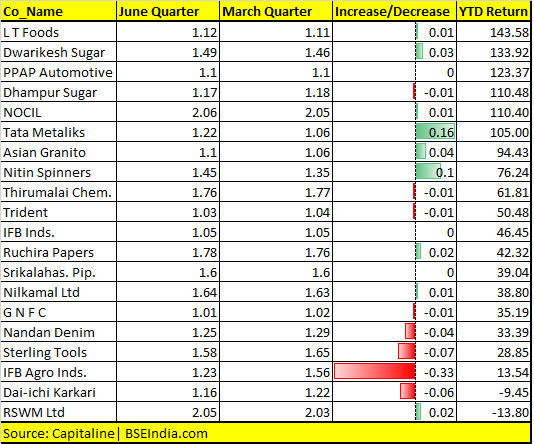 Out of the portfolio of 20 stocks, 2 gave marginally negative returns so far in the year 2017 while six stocks more than doubled investors’ wealth in the same period.

Stocks which more than doubled investors wealth so far in the year 2017 include names like LT Foods, Dwarikesh Sugars, NOCIL, Tata Metaliks and Nitin Spinners. These are companies in which Dolly also raised her stake.

Tata Metaliks saw the maximum addition of up to 0.16 percent stake followed by Asian Granito, Dwarikesh Sugar, and Nitin Spinners, the data showed.