A company which is forecasted to deliver a higher earnings is a good bet for your portfolio but at the same time investors should investigate whether economic conditions permit such kind of growth multiple.

The S&P BSE Sensex might have risen by about 17 percent so far in the year 2017 but many stocks have more than doubled investors’ wealth in the same period on the back of expectations of a strong recovery in earnings.

Analysts have given a higher earnings to these top twenty companies in the S&P BSE 500 index which more than doubled investors’ wealth in the year 2017, according to Reuters data.

For example, Future Retail which has given over 300 percent return so far in the year 2017 is currently trading at a PE multiple of 57.55 and earnings per share (EPS) of 9.45. The forward EPS allocated by Reuters database is 15.74 which highlights that earnings are expected to pick up.

Forward EPS and consequently the forward PE are expectations on the fundamental side from the company. If EPS is expected to improve significantly on account of improvement in the demand scenario then the markets may look at the stock as a re-rating candidate as well.

"Stocks, where forward EPS is higher due to an improvement in the demand scenario and/or permanent reduction in costs, can be accumulated as they look attractively valued," Nitasha Shankar, Sr. Vice President and Head of Research, YES Securities (I) Ltd told Moneycontrol.

A company which is forecasted to deliver a higher earnings is a good bet for your portfolio but at the same time investors should investigate whether economic conditions permit such kind of growth multiple.

"Investors should check if the company has the ability to deliver such high growth organically. One should keep vigilance on the industry, competition, economy etc. as high PE ratio stocks can recover heavily on any bad news,” Shrikant Akolkar, Sr. Equity Research Analyst, Angel Broking Pvt Ltd told Moneycontrol.

Let’s first understand what is earnings per share (EPS)?

Earning is an important component in driving share price in either direction. It typically refers to income after tax. It is also a number which is tracked by analysts in the financial statement.

Trailing earnings which is quoted more often is relatively less important because that information is already known or is available in the public domain. On the other hand, forward earnings refer to predictions made by analysts about the future growth potential.

“In a growth environment, trailing PE multiples do not have much meaning since stocks trade on basis of forward expected growth. When the markets correct due to an event which questions predictability of future earnings, trailing PE multiple tend to become relevant especially when markets start looking attractively valued on a historical basis,” Shashank Khade, Director, and Co-founder, Entrust Family Office Investment Advisors told Moneycontrol. 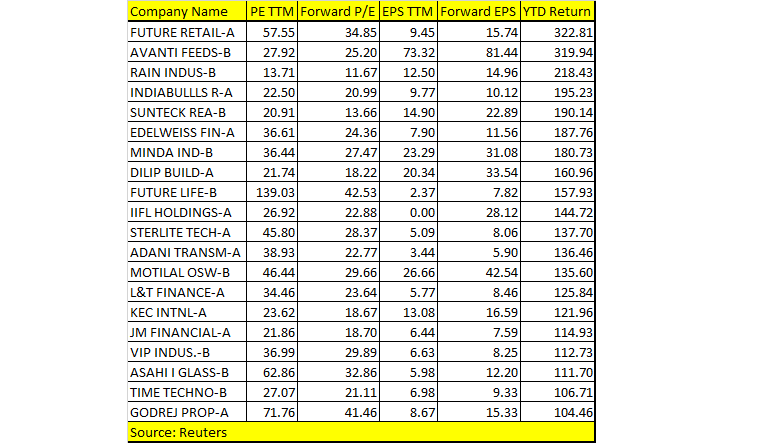 PE or the price-earnings multiple is a measure of confidence of investors. Growth in profits decides the sustainability or increase in the PE of a stock. Cyclical businesses tend to fetch lower PE multiples due to its volatile nature of earnings, suggest experts.

Investors should evaluate various fundamental indicators before putting their money to work in specific stocks. High PE stocks should be under constant vigilance as they leave a less margin of safety.

Most businesses trade in a range of valuation based on peak return on equity (ROE), return on capital employed (ROCE) generated by them. Sustainable Free cash flow generation of business is also an important determinant of valuation range, suggest experts.

“Beyond PE multiple, various valuation parameters such as Price to Book Value, Price to Free Cash Flow, Asset turnover ratio, EV/EBDITA are taken into account based on the business characteristics,” said Khade.

He further added that higher predictability of earnings fetches a premium in valuation. The expectation of accelerated growth in PAT, FCF leads to expansion of valuation multiples.