Last week in startup funding: Big rounds all around

In just one week, Indian startups have raised a billion dollars. We look at some the largest deals of the week and who invested.

It was a busy week for Indian startups, with companies raising nearly a billion dollars from top investors globally across sectors- from education to e-commerce and financial services, as per data from Tracxn.

In the week ended April 2, 2021, Byju’s- the edtech giant raised $460 million from MC Global Edtech and other investors, pushing its valuation to over $13 billion. It is now India’s second most valuable startup after fintech firm Paytm. Byju’s plans to use the money to acquire offline test prep firm Aakash- a billion dollar deal- and has other acquisition plans in the US too.

Meanwhile, baby products retailer FirstCry raised $315 million from private equity firms TPG, ChrysCapital and PremjiInvest, in an entirely secondary round, where early investors Elevation Capital, Vertex Ventures and others have sold their entire stake to this new investors, at a valuation of about $2 billion.

Lending firm Five Star Finance too joined the unicorn club- valued at a billion dollars or more- raising $234 million- also almost entirely secondary, led by Sequoia Capital and PE giant KKR. Five Star is not strictly a startup- it is technically 30 years old, but almost all its growth has come in the last 6-7 years.

Both Five Star and FirstCry plan to go public in the next few years. 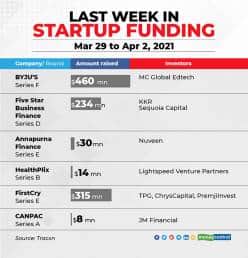 Healthtech startup Healthplix raised $13.5 million in a Series B round led by Lightspeed Venture Partners India. Healthplix provides a software platform for doctors to schedule appointments, prescribe medicines and engage with patients.

Meanwhile, packaging solutions company Canpac raised $8.3 million led by JM Financial Private Equity. Its clients include ITC, Amul, H&M and Tesco.
Invite your friends and family to sign up for MC Tech 3, our daily newsletter that breaks down the biggest tech and startup stories of the day