Byju’s’ FY21 revenue released last week showed that the company has a revenue multiple of over 40 for the year as it was valued at about $13 billion as of March 2021.

Byju’s’ FY21 revenue released last week showed that the company has a revenue multiple of over 40 for the year as it was valued at about $13 billion as of March 2021.

Revenue multiple is a financial metric used by investors to value startups, usually loss-making ones arrived upon by dividing the company’s valuation by revenue.

To put the number in perspective, Byju’s’ closest consumer-facing edtech rivals upGrad, PhysicsWallah, Eruditus, Unacademy and Vedantu have revenue multiples in the range of 6-33 for FY21. 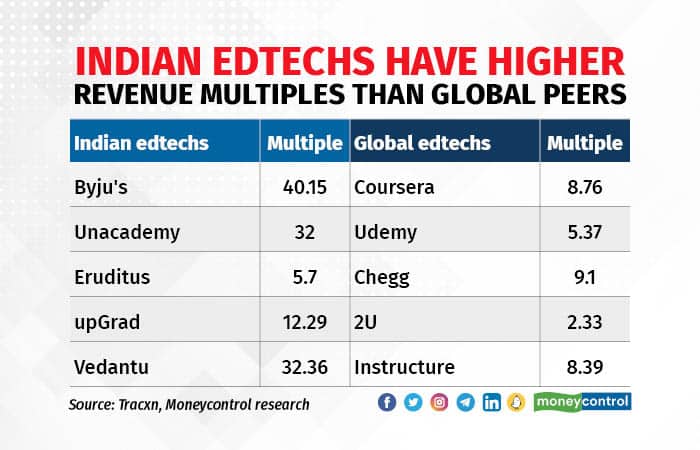 Some of the world’s largest edtech companies like 2U Inc, Udemy, Instructure, Coursera, and Chegg have revenue multiples between two and nine. Biggest listed Indian education companies by market capitalisation such as Shanti Education, Zee Learn, CL Educate, Career Point, and Veranda Learn have revenue multiples between one and 10. These companies, however, are far smaller than Byju’s in terms of valuation and revenue. 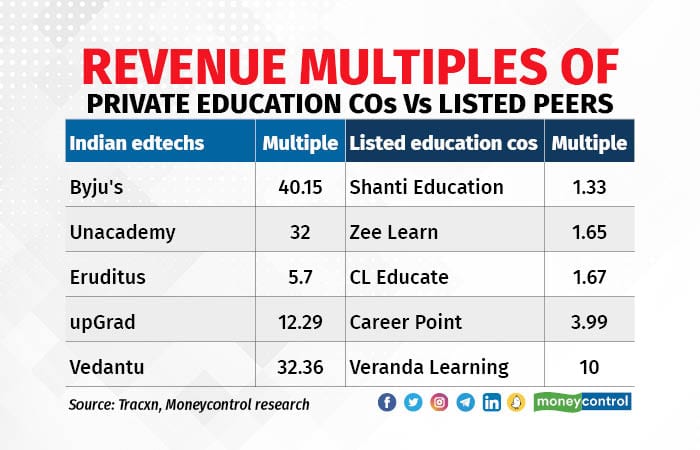 “As companies’ valuation goes higher, their revenue multiple tends to fall as their revenue growth slows. Byju’s is valued at over 7x of its next peer--Unacademy -- but its revenue is only about 5x of Unacademy,” said an industry expert requesting anonymity.

“Also revenue multiples of Unacademy, upGrad, etc will start falling from this year as their valuation grows and their revenue growth rate slows. No company at a $22 billion valuation will manage to raise money at 40x revenue. When you are as large as $22 billion, people start looking at profits and profit multiple not revenue,” the expert added.

“When growth is slowing or there is negative growth, sales multiple will reduce in absolute terms. That is a certainty. The question is will the company be able to raise money now when the sales multiple is contracting or the valuation is falling,” said Shyam Sekhar, founder and chief ideator, ithought Advisory.

The comments come at a time when Byju Raveendran, co-founder and CEO of Byju’s, has said that he has started reaching out to investors in the last few weeks. In a recent interview with Moneycontrol, Raveendran also said that he can raise $300 million in a week, when he was asked about updates on money coming from Sumeru Ventures and Oxshott Ventures. The company had earlier said that it was yet to get about $250 million of the over $1 billion it had announced raising last year from the two venture capital firms.

In another interview with Mint last week, Raveendran said that the company is planning for two rounds of funding, one will be a flat round at $22 billion valuation, and the other a converter round, which will convert at IPO (initial public offering) at a 20 percent discount. Converter rounds are typically offered to investors at a discount just before the IPO and they are given an option to convert it into equity when the company goes public.

Over the years, Byju’s has been very aggressive on raising funds. The company has raised over $5 billion in a mix of equity and debt to date. Byju’s has also always commanded high valuations. The company, which became a unicorn only in 2018, saw its valuation zoom to over $22 billion in less than four years. 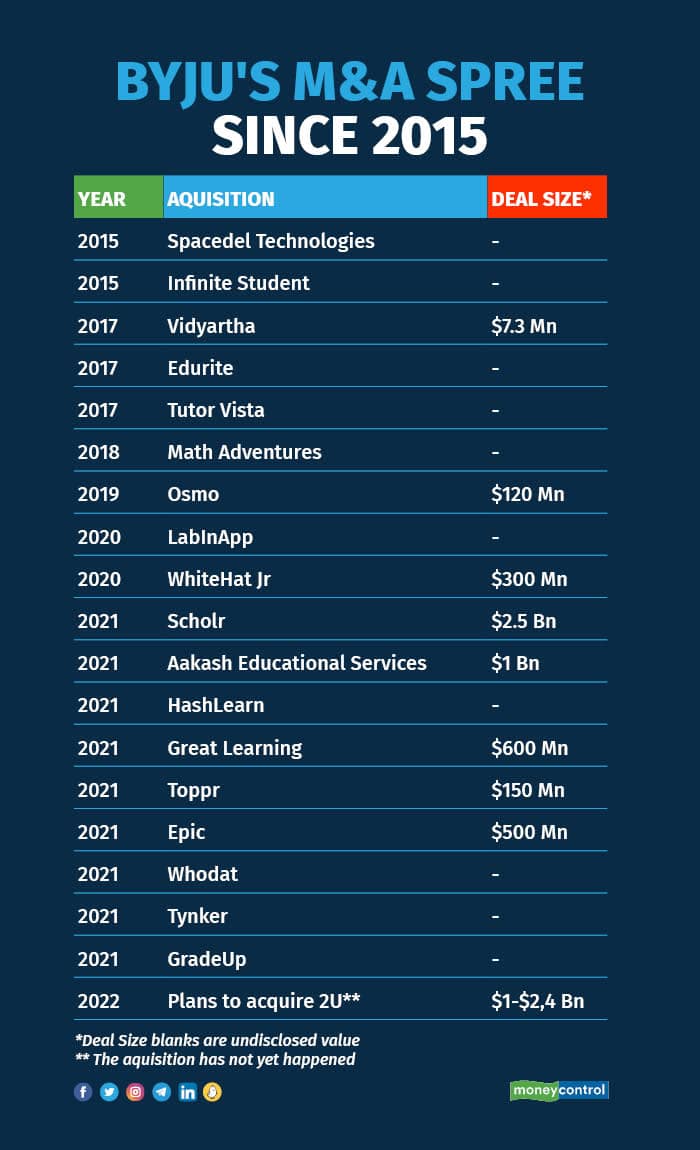 Byju’s has also expanded fast by acquiring a number of companies. According to data available on Tracxn, the company has either invested or fully acquired as many as 22 firms to date and has spent over $3 billion on acquisitions.
Invite your friends and family to sign up for MC Tech 3, our daily newsletter that breaks down the biggest tech and startup stories of the day