In pushing own group’s mutual funds, are banks shortchanging customers?

What happens when you walk into your bank’s branch and ask for mutual funds to invest in? You would expect your banker to sell you the scheme that is best suited to your needs, after proper risk profiling. The reality is that many banks may well be offering schemes that belong to their own group or those of subsidiary fund houses. Data on the commissions that fund houses paid to distributors in the year 2019-20 indicates that a lion’s share has gone to banks and other in-house distributors.

Public-sector banks are particularly fond of their own groups’ funds. Canara Bank almost entirely sold only schemes of Canara Robeco mutual fund. The effort was well-rewarded. Of Rs 92.94 crore commission that the fund house paid to its distributors, nearly 35 percent of this was paid to Canara Bank; the highest recipient of its commissions.

Take the case of State Bank of India. Nearly 99 percent of its mutual fund sales were of SBI mutual fund’s schemes. In return, 55 percent of the overall commissions that SBI mutual fund paid to all its distributors went to SBI’s coffers. Some private banks aren’t too far behind.

ICICI Bank and Axis Bank sold 68 percent and 56 percent of their own groups’ schemes. Axis Bank has been especially rewarded well for such sales. HSBC mutual fund paid Rs 20 crore to HSBC, or almost 62 per cent of its overall commissions paid to all distributors. HSBC MF’s second largest earning distributor got a mere Rs 3.1 crore. 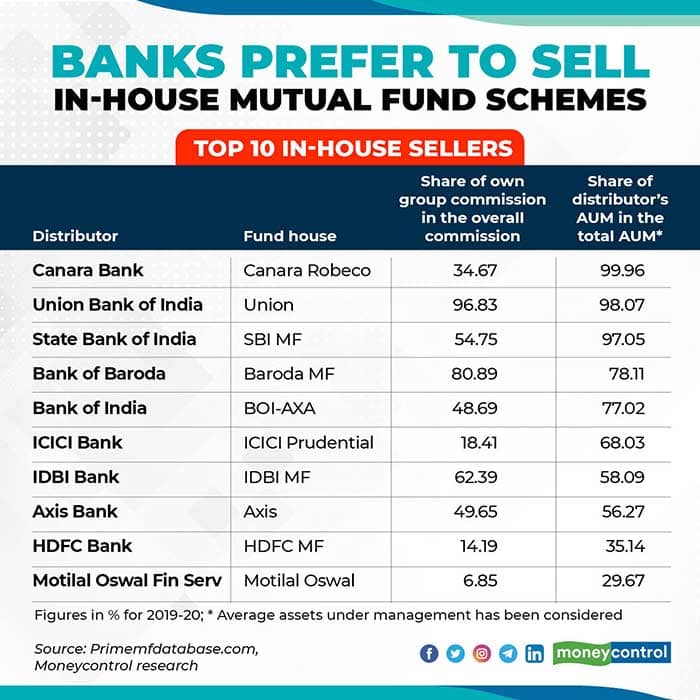 Every year, the MF industry discloses the commissions paid to top distributors. In 2011, the capital market regulator, Securities and Exchange Board of India (SEBI), had mandated that all AMCs should conduct due diligence of their top distributors. Distributors present in more than 20 locations across India or those whose assets under management from retail and high networth investors exceed Rs 100 crore or those who received commission of over Rs 1 crore across firms or Rs 50 lakh from a single house, would need to adhere to the due diligence. The commissions that a fund house pays to any of these distributors must be publicly disclosed.

-If the banks sold their in-house schemes purely on merit;

-If the majority or significant proportion of schemes sold belong to the group’s mutual fund, then isn’t that mis-selling; and

-Does the bank conduct detailed risk-assessment of its customers before recommending any mutual fund.

There were 17 such large distributors and Moneycontrol sent a list of questions to all of them. Only Kotak Bank, Kotak Securities, ICICI Securities, HSBC and Bank of Baroda responded. Moneycontrol also reached out to a few of these fund houses to check if they were satisfied with the risk profiling processes that the banks claim they have put in place.

D.P. Singh, Chief Business Officer, SBI MF says that the reason why a large proportion of its sales come from State Bank of India is because of the bank’s wide reach. He says that SBI has 25,000 branches across India and more than 14,000 of these have brought in inflows. “The per-branch contribution is less than Rs 1 crore in gross inflows,” he says. In smaller towns, an SBI customer is most likely to find comfort with SBI MF.

Curiously, the bank, like many other top commission earners from their in-house funds, has reported net inflows of just about 12,699 crore, as opposed to a gross inflow of Rs 62,725 crore. Has the bank churned the assets? “No, there has not been a churn. Most of the money that goes out quickly is short-term money. Besides, 80 percent of SBI’s inflows are in debt schemes,” says Singh.

Raghav Iyengar, Chief Business Officer at Axis mutual fund says that his group’s schemes have done well and that is one reason why distributors, particularly Axis Bank, have sold its funds. “This has also helped us achieve a leadership position across all distributor categories, including in those such as fintech, which are mostly driven by investors,” says Iyengar. 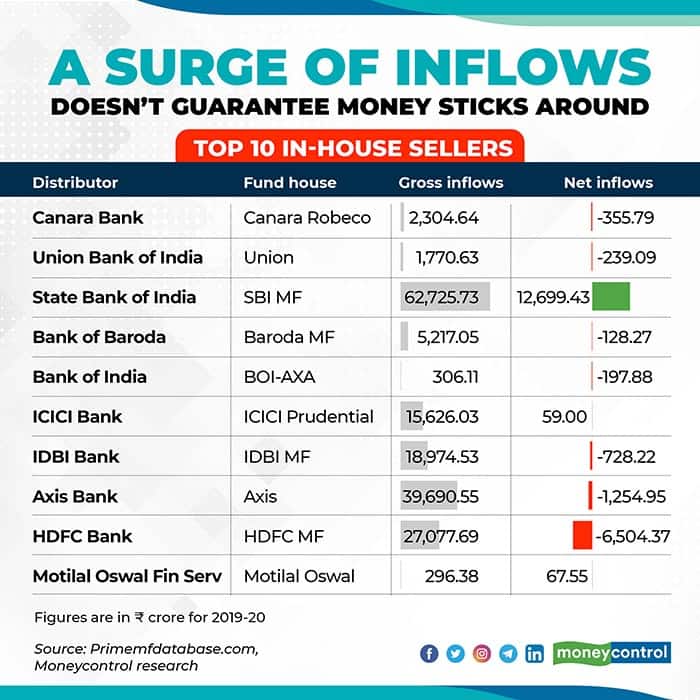 Curiously, Axis Bank has reported a net outflow (outflows exceeded inflows) for Axis MF schemes. Iyengar too points to the “large liquid fund outflows” as well as weak sentiments in the markets. “At the same time, it has been our (Axis MF’s) strategic imperative that we improve our distribution coverage across all categories of distributors…we have significantly expanded the number of distributors that we work with over the last 2-3 years and today we enjoy strong market share across all channels,” he adds.

An ICICI Prudential MF spokesperson says that one reason why inflows through the group’s bank are substantial is because “investors have tended to prefer larger fund houses such as ours, given the events in the recent past, which have impacted the confidence of investors.”

Flows not necessarily backed by performance

Not all large inflows from a group entity (bank) gets backed by strong performance. Take the case of HSBC. Of its overall MF assets under management, more than a fifth are those of HSBC mutual fund. Yet, of the total commissions that HSBC MF paid out to its distributors, nearly 62 per cent went to HSBC’s pockets. Ramakrishnan S, Head–Wealth and Personal Banking, HSBC India, insists that the fund house sells “select funds from 13 fund houses and has a well-diversified AUM across AMCs.” Why, then, has HSBC not been able to retain the amounts it got for HSBC mutual fund? In 2019-20, HSBC got gross inflows worth Rs 2085 crore for HSBC mutual funds. But it reported a net outflow of Rs 734 crore. “The decision of investment / redemption rests with the investor and the flow of assets under management is reflective of the same,” says Ramakrishnan.

Fund houses such as IDBI and Baroda continue to garner a sizeable chunk of their assets from their respective own group banks and in-turn pay them a lion’s share of their total commissions. IDBI Bank did not revert to our queries. Purshotam, Chief General Manager–Retail Liabilities, Bank of Baroda, says that in these last two years, Bank of Baroda has revamped its business model for mutual fund distribution and has tied up with leading 20 mutual fund companies for distribution of their products. “Earlier in 2018, Baroda MF constituted around 94 percent of our average AUM, which has dropped to 78 percent as of March 2020.”

As investors, you need to exercise caution when your distributor, particularly your bank, recommends in-house mutual funds. Remember, your banks get a commission on every sale, but you need to grill your relationship manager about the choice of schemes.