Extension of EMI moratorium: Be mindful of the high interest burden

Interest will continue to accumulate during the period, as it is a deferment and not a waiver

Borrowers now have three more months to pay their equated monthly instalments (EMI). The Reserve Bank of India (RBI) on Friday announced an extension of the loan repayment moratorium to borrowers – originally rolled out in March – up to August 31, 2020.

As per industry estimates, around 25 per cent of the borrowers have opted for the moratorium facility. Given that the impact of the novel Coronavirus Disease-induced nationwide lockdown will continue to be felt in the next few months, it is likely that many would opt for the extension too.

Interest to pile on

However, the interest on your loan will continue to accumulate during this six-month period, extending your loan tenure. For example, if you had taken a Rs 45-lakh home loan in January 2020, opting for the six-month moratorium would add 24 EMIs to your tenure. This is assuming that the original tenure and rate of interest were 25 years and 8 per cent per annum, respectively. This, even after factoring in the repo rate cut of 40 basis points. Put simply, thanks to the compounding effect, a six-month moratorium will set you back by Rs 6.28 lakh, which is the additional interest you have to shell out over the extended tenure. Since the interest component in the initial years is higher, those who have taken loans recently will see their interest burden, and thus the number of EMIs, go up sharply. The impact will be less severe for those who are close to paying off their loans. 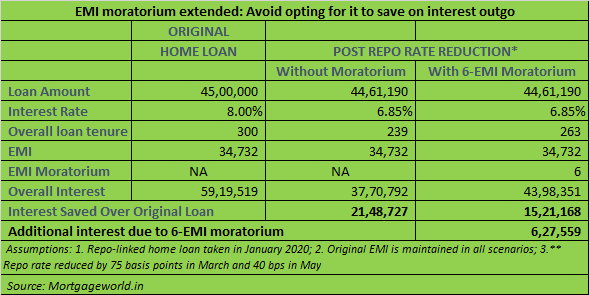 “Given the increase in the interest rate burden, you must avoid opting for the EMI moratorium. Use the facility only if your cashflows are severely constricted. The salaried individuals, who have not faced pay cuts, should keep paying EMIs as per the original schedule,” says Vipul Patel, Founder, Mortgageworld.in. The two rate cuts – 75 bps in March and 40 bps now – have reduced the interest burden considerably for borrowers. Use the benign interest rate regime to continue paying your loans instead of settling in favour of temporary liquidity relief. Keep a tight lid on your expenses, if you have to, but do not compromise on EMI payments.

Those who have already opted for the moratorium in March, too, can see if they can start servicing their loans. If their financial situation does not permit, however, they can opt for the moratorium extension as the last resort, even if it means having to shoulder the burden of accumulated interest. “The deferred interest will need to be repaid on the same terms that were applied for in the first moratorium. For long-term loans, the accrued interest will be added to the principal, and the EMI or the tenure will be recalculated. Some lenders also provide the opportunity to pay off the accumulated interest in one-shot at the end of the moratorium,” says Adhil Shetty, CEO, Bankbazaar.com.