Fiscal stimulus, with one stroke, changes narrative for India as an investment hotspot

Highlights
- So far, easier monetary policy alone was expected to do the heavy lifting
- By cutting corporate tax rate from 30% to 22%, a fiscal stimulus is added
- Brings India at par with some of the major Asian countries
- These steps can help India capitalise on the opportunities from the trade war
- Can re-energise private capex cycle and Make in India initiative

Unprecedented times demand special measures. India’s economic growth has been faltering and has dropped to multi-year lows due to tighter funding conditions, a sharp decline in consumer confidence as well as global headwinds.

The policy response to mitigate the current slowdown has been mainly through monetary policy, with interest rates reduced four times by a total of 110 bps from August last year till date. But so far, the government exercised restraint in easing fiscal policy. Despite the slowing economy, the FY20 Budget did not envisage any additional stimulus through the reported fiscal deficit figures, with the FY20 targeted fiscal deficit almost flat at 3.3 percent of GDP, compared to 3.4 percent for FY19.

Today, the Government finally bit the bullet and announced corporate tax rate cuts for all manufacturing companies from 30% to 22% in an attempt to battle the economic slowdown.

Since corporate taxes account for around one-third of total tax collections, the reduction will adversely impact the fiscal math. But since corporate profits as a percentage of GDP are at a decadal low, the timing of the move seems  perfect and it can kick-start the flagging private investment cycle.

Most countries are moving towards lower corporate tax rates. The average corporate tax rate globally is around 23%. As per KPMG, the average Asian tax rate declined from 29.42 percent in 2003 to 23.03 percent currently. So today’s reduction will bring India at par with the prevailing corporate taxation rate for some of the major Asian countries. It will help India become more competitive vis-à-vis its Asian counterparts and help attract more investment into the country. Note that earlier this month, Indonesia announced plans to lower its corporate tax to 20 percent by 2021 from the existing 25 percent. In fact, the Indonesian authorities also said that companies listing their shares may be subjected to a lower rate of 17% for a period of five years.

The ongoing China-US trade war has led MNCs to look for an alternative to China as far as their supply chain is concerned. As of now, a few Asian nations such as Vietnam, Indonesia and Thailand have been ahead of India in benefiting from this trade and investment shift.

Now, the competitive taxation rate and ongoing efforts towards ease of doing business should help in India becoming a manufacturing destination of choice. 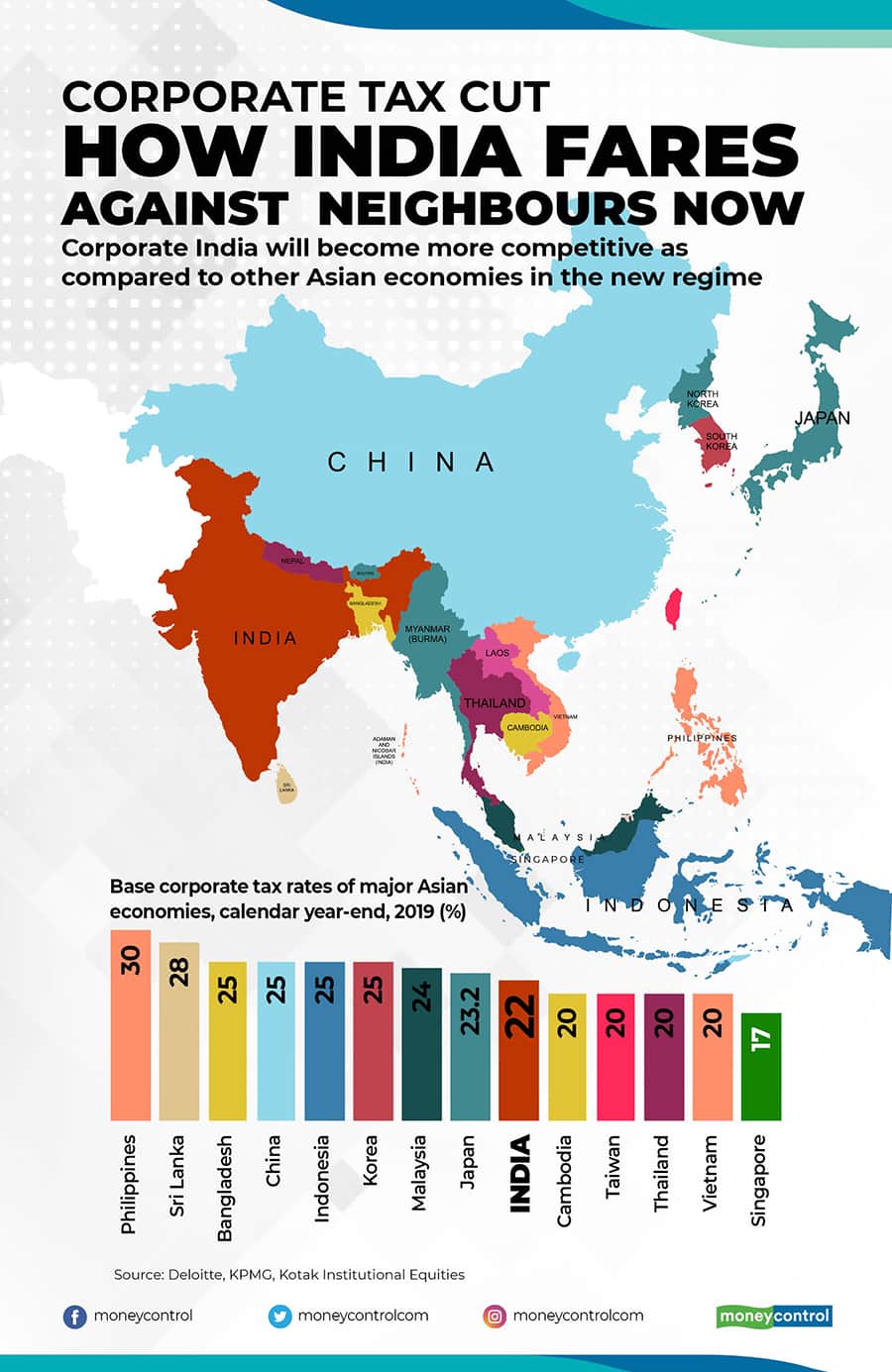 Make in India gets a leg-up

The announcement that a domestic company incorporated on or after 1st October 2019 will pay income tax at the rate of 15 percent is especially welcome. This comes with a rider that production commences before 31st March 2023. This can hasten the private capex cycle with timely execution. We see investment in the chemical and Pharma APIs business lines as they position for import substitution strategies.

This comes as a major boost to the “Make in India” theme which got some support during the last Union Budget. The finance minister had then proposed changes in customs duties on a range of imported goods. The increase in duties on items such as optical fibres, cables, CCTVs, roof tiles, PVC etc is anticipated to benefit multiple sectors ranging from chemicals to consumer durables and electrical goods.

Now, the reduction in tax rates gives a further fillip to domestic manufacturers. The move could also boost exporters as the lowering of tax rate would make products more competitive from a price perspective.