Markets had been eagerly waiting for the October 2019 auto numbers to get a direction on the medium-term outlook for the industry. However, the numbers failed to cheer. Despite being the festive month (with both Dussehra and Diwali), auto majors did not report a good set of numbers. On expected lines, there was recovery on a month-on-month basis, but year on year growth continues to paint a bleak picture for auto makers.

The industry still faces severe challenges arising out of a weak macro environment and tough regulatory framework. Though there was some respite in two-wheeler (2W) and passenger vehicle (PV) segments, commercial vehicles (CV) continue to move in the slow lane.

The industry is pinning hopes on pre-buying ahead of BS VI implementation as a probable demand trigger in the coming months.

Commercial Vehicle – the uphill ride
Economic slowdown, liquidity crunch and non-availability of retail finance have all led to a significant decline in demand within the segment. This got further aggravated by axle load norm, which increased carrying capacity in the M&HCV (medium and heavy commercial vehicle) segment. Additionally, customers have been postponing purchases, given the poor freight availability and the falling freight rates impacting their cash flow.
Close

However, the management of Tata Motors has indicated that the overall system stock is now at a multi-quarter low, which coupled with increasing enquiries, and the government's thrust on infrastructure investments, should help firm up volumes and realisations.

Tata Motors registered a 34 percent YoY decline in CV volume led by 62.2 per cent drop in the M&HCV segment and 19.6 percent in LCVs. Eicher Volvo also witnessed a decline of 37.2 per cent. Ashok Leyland also took a hit of 37 per cent whereas M&M bucked the trend and posted a slight decline of 3 per cent.

Cars segment – Holding out
The car segment did relatively better during the festive month. The leader, Maruti, posted a 6 per cent growth in volume for the month. Tata Motors’ and M&M’s passenger car segments saw a fall of 28 per cent and 23.1 per cent, respectively.

Lacklustre demand in the space is due to increase in total cost of ownership led by mandatory long-term insurance.  Also, implementation of safety norms has led to increase in prices and impacted sales amid weak consumer sentiment.

Two-wheelers (2W) continue to disappoint
Hero, the leader in the space, reported a sharp 18.4 per cent decline in volume. Bajaj Auto and TVS too saw a decline of 13.9 per cent and 20 percent, respectively.

Eicher, the leader in the premium bike segment, however, witnessed a growth of 2.1 per cent in its monthly sales numbers.

Three-wheeler (3W): Muted growth
The overall 3W market posted mixed numbers in October 2019. TVS and M&M racked up a growth of 7.7 per cent and 3.2 per cent, respectively. Bajaj Auto, the leader in the space, had to put up with a fall of 5.5 per cent.

Tractors: Muted farm sentiment impacted demand
Delayed rainfall and an uneven rainfall distribution have played spoilsport for the tractor segment. Escorts posted an increase of 1.3 per cent and M&M suffered a decline of 4.1 per cent.  M&M management expects that higher reservoir levels, adequate soil moisture condition and an improved MSP of Rabi crop augur well for tractor demand in the next few months.

Exports: Mixed sentimentExport numbers are mixed for October 2019. Maruti, Eicher, TVS and Escorts all registered a growth here whereas others took a beating in their monthly exports numbers. 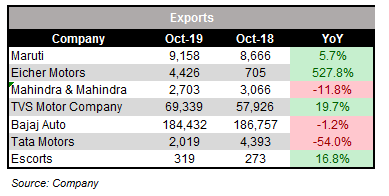