Battery, being an essential component for an EV, would force a paradigm shift in the way these companies operate and could radically alter their fortunes depending on how well they adapt to the new reality.

The battery sector seems to in fine fettle, except for volatile raw material prices, which are easing now. However, the noise around electric vehicles (EV) raises numerous questions about the prospects of these entities. Battery, being an essential component for an EV, would force a paradigm shift in the way these companies operate and could radically alter their fortunes depending on how well they adapt to the new reality.

Today, we analyse the recent quarter’s performance of two of India’s largest battery manufactures - Amara Raja Batteries (ARBL) and Exide Industries, the key growth drivers and challenges ahead of the EV push.

ARBL’s net sales grew 17.6 percent year-on-year on the back of strong growth accruing from the automobile segment (around 30 percent). The latter achieved YoY volume growth of 25 percent and realisation growth of 5-6 percent. Within this space, four and two-wheelers grew 25 percent and 32 percent, respectively.

Its industrial segment continues to pose a challenge due to pain emanating from the telecom segment. Within this space, volume growth in UPS (uninterruptible power supply) and railways remained healthy and helped the company gain market share.

Earnings before interest, depreciation, tax and amortisation (EBITDA) margin has been under pressure due to increase in lead prices, a key raw material. The same contracted 40 basis points YoY. Exide posted strong net revenue growth for Q4 FY18 (25.8 percent YoY) on the back of growth in 2W and 4W markets and UPS and infrastructure battery segments.

Despite the rise in raw material prices, the company was able to post an 80 bps rise in EBITDA margin led by operating leverage and cost reduction measures undertaken by the management.

Shift from unorganised to organised

After rollout of the Goods & Services Tax, there has been a meaningful shift from unorganised to organised players on the back of slightly lower prices. This led to growth in market share for both battery manufacturers.

The segment is flooded with many small and unorganised players which provides a huge opportunity to branded players. Post-implementation of GST, we see a strong opportunity for the branded manufacturers to outperform industry growth.

After exerting huge pressure on margins, lead prices, a key raw material for battery manufacturers, have come off from last year highs and is currently down around 8 percent sequentially. This fall and the price hike undertaken by both companies in Q4 FY18 should support margins in coming quarters.

ARBL has aggressive capacity expansion plans lined up over the next four years. It plans to boost capacity in the automotive segment to 36 million units in FY20 from 25 million units in FY18. The capacity expansion is due to strong demand from original equipment manufacturers (OEM) and replacement battery segment. The management also plans to expand capacity in telecom and UPS segments by 32 percent and 100 percent, respectively, to capture the gradual improvement in demand from the industrial segment.

Exide had earmarked Rs 1,400 crore in FY16 to introduce new technologies for manufacturing high performance batteries. Half of this capex was used in FY17 to introduce punched grid technology at its new plant in Haldia, West Bengal. The balance has been kept aside for introducing robotics technology. All these measures would help it become more cost efficient and would help drive margins higher.

The biggest challenge for battery manufacturers is sourcing of raw material. Lithium a key raw material used in EV batteries and 70 percent of these reserves are concentrated in South America.

Yet to overcome technological challenges

The EV battery should have the following five capabilities: 1) High energy density – the weight of the battery should not affect the performance. Here lithium scores over others as it has a high energy density. 2) Battery design should be such that it offers maximum range per charge. 3) How fast the battery charges. 4) Number of cycles or its longevity. Finally, the cost, at which all the above features work out to. 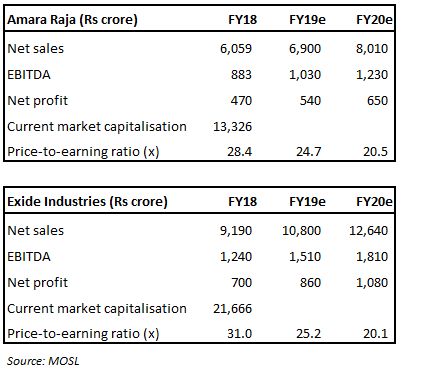 While the dark clouds of EVs remain on battery manufacturers, companies are working on manufacturing batteries that are suitable for them. The perceived threat of EVs along with the volatility in key raw material prices has led to temporary de-rating of these companies. This provides an accumulation opportunity for investors as the widespread adoption of EV is many years away. Hence, conventional battery manufacturers will continue to have a meaningful growth in the medium term.