Based on the open interest future percentage, a short-covering was seen in 73 stocks including JK Cement, ICICI Lombard General Insurance, Muthoot Finance, Eicher Motors, and Coforge

The benchmark indices maintained an uptrend for the seventh consecutive session as the BSE Sensex climbed 418 points to 60,260, while the Nifty50 rose 119 points to 17,944 and formed a bullish candlestick pattern on the daily charts.

"On the daily charts, the Nifty added one more positive candle in the ongoing strong bull run and is moving towards the 18,000 mark. The momentum indicator RSI (relative strength index) is rising as the prices are moving higher. This shows that strong bullish momentum is present in the index," Vidnyan Sawant, AVP - Technical Research at GEPL Capital said.

As per the overall chart pattern, Sawant feels that the Nifty will continue to move towards 18,115 followed by 18,351 levels in the coming future. "Our bullish view will be negated if it sustains below 17,566 levels on the downside." 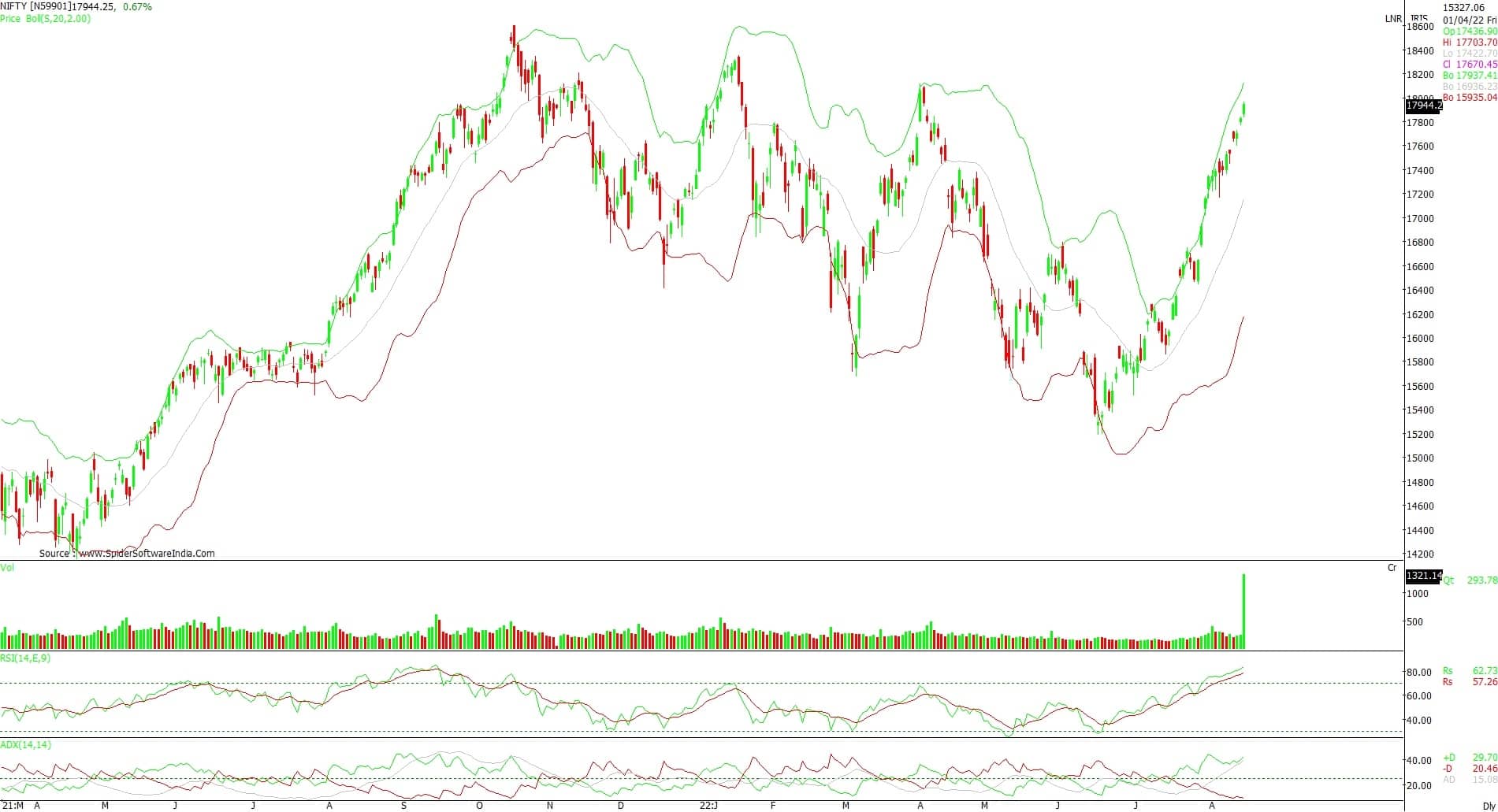 The Nifty Bank climbed 222 points to 39,462, the highest closing level since November 2021 and formed a small-bodied bullish candle on the daily charts on Wednesday. The important pivot level, which will act as crucial support for the index, is placed at 39,275, followed by 39,088. On the upside, key resistance levels are placed at 39,577 and 39,691 levels.

Maximum Call open interest of 38.96 lakh contracts was seen at 18,000 strike, which will act as a crucial resistance level in the August series.

Maximum Put open interest of 33.7 lakh contracts was seen at 17,500 strike, which will act as a crucial support level in the August series. A high delivery percentage suggests that investors are showing interest in these stocks. The highest delivery was seen in Alkem Laboratories, Kotak Mahindra Bank, Larsen & Toubro, Power Grid Corporation of India, and Syngene International, among others.

An increase in open interest, along with an increase in price, mostly indicates a build-up of long positions. Based on the open interest future percentage, here are the top 10 stocks including Whirlpool, Birlasoft, Apollo Tyres, Hindustan Copper, and Bajaj Finserv, in which a long build-up was seen.

A decline in open interest, along with a decrease in price, mostly indicates a long unwinding. Based on the open interest future percentage, here are the top 10 stocks including ABB India, Bata India, Escorts, SBI Life Insurance Company, and Tata Chemicals, in which a long unwinding was seen.

An increase in open interest, along with a decrease in price, mostly indicates a build-up of short positions. Based on the open interest future percentage, here are the top 10 stocks including Alkem Laboratories, Shriram Transport Finance, Ashok Leyland, PVR, and GAIL India, in which a short build-up was seen.

A decrease in open interest, along with an increase in price, mostly indicates a short-covering. Based on the open interest future percentage, here are the top 10 stocks including JK Cement, ICICI Lombard General Insurance, Muthoot Finance, Eicher Motors, and Coforge in which a short-covering was seen.

Nava: Employees Retirement System of Texas - Self-Managed Portfolio bought 10,88,202 equity shares or 0.75 percent stake in the company via open market transactions at an average price of Rs 246.16 per share.

Tamil Nadu Newsprint & Papers: Officials of the company will meet investors and analysts.

Indigo Paints: Officials of the company will meet various investors/analysts in London which is organised by Kotak Securities.

Fine Organic Industries: Officials of the company will attend an investor conference hosted by Motilal Oswal.

Oil and Natural Gas Corporation: ONGC will be in focus as it has signed a Heads of Agreement (HoA) with global petroleum giant ExxonMobil for deepwater exploration on the East and West coasts of India. The collaboration areas focus on the Krishna Godavari and Cauvery Basins in the eastern offshore and the Kutch-Mumbai region in the western offshore.

Natco Pharma: The company in its BSE filing said it has received tentative approval for its abbreviated new drug application (ANDA) for Trabectedin for injection for the 1mg/vial. Trabectedin is a generic drug for Yondelis. According to industry sales data, Yondelis generated annual sales of $49.7 million for 12 months ending June 2022 in the US market.

Indo Amines: The company has received environmental clearance for the expansion of 'synthetic organic chemical' production at its manufacturing plants in Thane and Dhule, Maharashtra.

Infibeam Avenues: Infibeam shares will be in focus after the company in its BSE filing said the board of directors on August 25 will consider fundraising.

Craftsman Automation: The company has commenced the commercial operations of its new plant at Pune, Maharashtra.

GAIL (India): The company received the board approval for additional fundraising of $3.125 billion via external commercial borrowing and up to Rs 25,000 crore via non-convertible debentures. This is on top of Rs 25,000 crore already borrowed by the company.

Three stocks - Balrampur Chini Mills, Delta Corp and Tata Chemicals - are under the NSE F&O ban list for August 18. Securities in the ban period under the F&O segment include companies in which the security has crossed 95 percent of the market-wide position limit.

Disclaimer: The views and investment tips expressed by investment experts on Moneycontrol.com are their own and not those of the website or its management. Moneycontrol.com advises users to check with certified experts before taking any investment decisions.
Sunil Shankar Matkar
Tags: #Market Cues #Market Edge #Nifty #Sensex #Trade Setup #video
first published: Aug 17, 2022 10:19 pm