The index has fallen for fifth consecutive session and broken its 200 DEMA, forming large bearish candle which can also be called as Long Black Day kind of formation on daily charts

The Indian market fell for the fifth consecutive session on October 4 as it came under pressure after the announcement from the Reserve Bank of India's (RBI) Monetary Policy Committee (MPC) meet.

The committee slashed rates by 25 bps and kept its stance accommodative to revive growth in Asia's third-largest economy.

The MPC slashed policy rates for the fifth time in a row, in line with expectations. Consequently, the rate cut comes to a total of 135 bps in 2019 and the repo rate currently stands at 5.15 percent.

Rate sensitive stocks such bank, auto and real estate stocks fell the most, followed by metal, pharma, FMCG and infra stocks. However, IT stocks remained on the buying side.

RBI has also raised lending limit for MFIs. While reducing rate Governor added that OMOs will be done to deal with the liquidity situation, he added.

The index has fallen for the fifth consecutive session and broken its 200 DEMA, forming large bearish candle which can also be called as Long Black Day kind of formation on daily charts. It lost nearly 3 percent and formed bearish candle on weekly scale as well.

On October 4, the market fall was mainly because of RBI slashing FY20’s GDP growth target to 6.1 percent, down from its earlier forecast of 6.90 percent on the back of weakening domestic demand conditions, said Shrikant S Chouhan, Senior Vice-President, Equity Technical Research, Kotak Securities.

Nifty closed comfortably below the level of 200 days SMA, whereas Sensex closed just above the same. On the higher side, Nifty would face hurdles at 11,260, which is resistance of 200 days SMA, commonly followed by major participants of the market, he added.

Maximum call open interest (OI) of 10.50 lakh contracts was seen at the 11,200 strike price. It will act as a crucial resistance level in the October series.

Maximum put OI of 24.30 lakh contracts was seen at 11,000 strike price, which will act as a crucial support in the October series.

Based on the lowest OI future percentage point, here are the top 15 stocks in which long unwinding was seen.

An increase in OI, along with a decrease in price, mostly indicates a build-up of short positions. Based on the OI future percentage, here are the top 15 stocks in which short build-up was seen.

A decrease in OI, along with an increase in price, mostly indicates a short covering.

HUL: Board meeting on October 14 to consider and approve the financial results for the period ended September 30 and dividend.

M&M: Board meeting on November 8 to consider and approve the standalone and consolidated financial results of the company for the second quarter and half year ended September 30.

Union Bank of India: Board meeting on October 9 to consider and approve issue of equity shares on preferential basis to the government of India.

RBL Bank: Board meeting on October 22 to consider and approve the financial results for the period that ended on September 30.

Ambuja Cements: Board meeting on October 18 to consider and approve the financial results for the period that ended September 30.

Garden Silk Mills: Withdrawal of invitation for bids and sale of financial assets/loan account of company.

Ashok Leyland: The company's plants at various locations will be observing non-working days ranging from 2-15 days, during the month of October. 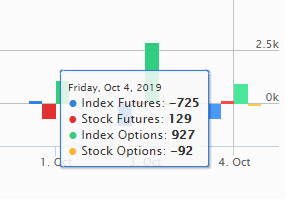 There are no stocks under the futures and option (F&O) ban for October 3. Securities in ban period under the F&O segment include companies in which the security has crossed 95 percent of the market-wide position limit.
Rakesh Patil
Tags: #market dge #video
first published: Oct 6, 2019 07:10 pm