Equity benchmarks the Sensex and the Nifty have been ending in the red for the last four consecutive sessions.

The Sensex and Nifty lost more than a percent in the week ended February 19, while BSE midcap and smallcap indices outperformed with gains of 0.63 and 1.23 percent, respectively.

In the coming week, the market may witness volatility due to the expiry of the February F&O series. Global cues, third-quarter GDP numbers and updates on Covid-19 cases will continue to dominate the mood of the

Maximum Call open interest of 39.70 lakh contracts was seen at 15,500 strike, which will act as a crucial resistance level in the February series.

Maximum Put open interest of 32.98 lakh contracts was seen at 15,000 strike, which will act as a crucial support level in the February series.

Apoorva Leasing Finance: The board will meet on February 22 to consider and approve quarterly results.

D B Realty: The board will meet on February 22 for the issue of warrants and the preferential issue of shares.

SPEL Semiconductor: The board will meet on February 22 to consider and approve quarterly results.

Unishire Urban Infra: The board will meet on February 22 for general purposes.

Foseco India - Approved the appointment of Mohit Mangal, as the chief financial officer (CFO) in place of R Umesh. 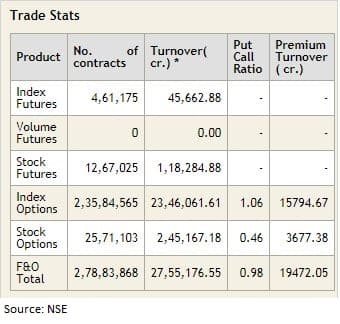 Four stocks - BHEL, Canara Bank, Vodafone Idea and SAIL - are under the F&O ban for February 22. Securities in the ban period under the F&O segment include companies in which the security has crossed 95 percent of the market-wide position limit.
Nishant Kumar
Tags: #Nifty #Sensex #Trade Setup #video
first published: Feb 21, 2021 07:15 pm