All-in-all, Yes Securities believes the market will run up ahead of, and in anticipation of an ensuing economic recovery.

The stock market has been moving higher ever since hitting multi-year lows in March 2020. Unprecedented liquidity, earlier than expected vaccine roll-out, a consistent decline in COVID cases and quick-fix measures taken by the government and RBI to revive the economy has helped indices make new highs almost on a daily basis.

Both Nifty and Sensex have rallied around 90 percent from their March 24's lows, to hit fresh record high levels, and gained 15 percent in 2020.

"The stock market recovery is indeed incredible, surpassing previous lifetime high. Notwithstanding the uncertainty on many economic fronts, we believe that the worst is over for the stock market. With regards to the COVID crisis, the market assessment is that rural India is largely unaffected. Also, the majority of the cases in urban parts of the county were restricted to only a few cities and the overall case curve is falling," Yes Securities said in its note.

"We wouldn’t be surprised to see more than 15 percent nominal GDP growth in FY22, on the back of a low base of FY21. Corporate earnings in Q2 FY21 have been strong, with only a 10 percent fall in revenues from pre-COVID levels. Disruptions over the past five years have depressed earnings. However, strong expansion is due, as history reckons that an era of strong reforms generally precedes sharp rebound in corporate profitability," the brokerage added.

Foreign institutional investors pumped in more than Rs 1.6 lakh crore in Indian equities in 2020 following more than $10 trillion worth of stimulus packages announced globally to support the world economy.

"Interest rates have been lowered with a promise to keep them subdued for as long as necessary. And with the US Dollar on a sideway or downward journey, capital will flow to emerging markets like India. Besides actively managed funds, Indian equities are also likely to receive passive fund flow after the MSCI rejiged in its favour," said Yes Securities.

Coming to valuations, "they don't appear to be in dangerous territory to us, as widely perceived. Optically, values may appear high, but when seen in the context of where the cost of capital is, lack of opportunities in other asset classes, they certainly seem reasonable," said the brokerage.

The brokerage feels if earnings play catch-up, in two out of the next four years, then valuations will start looking cheap to the present naysayers. "The market structure also looks promising, after a long consolidation since 2018, and volatility coming off from elevated levels."

The broader markets outperformed benchmark indices so far and are expected to outperform going forward too given the strong economic and earnings growth ahead. The Nifty Midcap 100 index climbed 100 percent and Smallcap 100 index gained 120 percent from March lows, and both are yet to scale their all-time high seen in 2018.

All-in-all, Yes Securities believes the market will run up ahead of, and in anticipation of an ensuing economic recovery. "2020 was largely about survival, both health-wise and finance-wise. But, this is also the opportune time to tweak and tighten your portfolio. 2021 could well be akin to the year 2003, from a market standpoint. In our reckoning, the best for the market lies immediately ahead," said the brokerage. 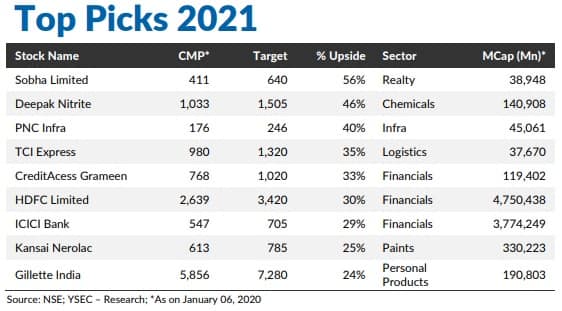 Yes Securities believes, Sobha is a placed better tha other companies in the realty space given its a) its strong brand, b) better product realizations, c) backward integration of processes including in-house design, architecture, mechanical, electrical, plumbing and engineering, d) superior execution capabilities, and 5) diversifications from Bangalore market to pan India player. Also, the company is likely to be a prime beneficiary of consolidation in the industry, said the brokerage.

Yes Securities is positive on Deepak Nitrite citing a) its import substitute capabilities for domestic players b) it being an alternative to Chinese players for other global manufacturers, c) diversified and de-risked business model d) improved operational and financial performance on account of ongoing and upcoming CAPEX.

Additionally, "Deepak Nitrite has delivered healthy financial performance during FY10-20 (PAT CAGR of around 35 percent)," said the brokerage. Going forward, it believes improvement in financial performances across major business units to keep return on equity (ROE) at over 25 percent between FY21-FY24.

"With monsoon largely behind and better labour availability, execution pace is set to see sharp improvement during H2 FY21. Operating margin is expected to remain healthy at around 13.5 percent levels. The order book at around Rs 15,800 crore is in a comfortable position with around 3x FY20 revenues. Recent order inflows, continued focus on asset monetization and comfortable balance sheet position provide comfort," said Yes Securities.

The brokerage believes the company would be one of the biggest beneficiaries of strong project awarding by NHAI. "Entry in water segment has also opened new business avenues which would support order book going forward."

Going forward, Yes Securities believes, TCIE is one of the better placed express player in the industry with a) its robust position in express industry, b) higher contribution from B2B clients, and c) focus on growing SME sector.

"The cost-cutting measures, price hikes, the opening of sorting centres at select locations would ensure improvement in operating margin performance. We believe the asset-light model would significantly benefit the company in an uncertain business scenario. Also, its return ratios remain best among the industry," said the brokerage.

"With renewed momentum in disbursements to continue, the consolidated AUM growth is estimated to accelerate to 25-30 percent in FY22. As the growth would be largely sourced by the newly opened branches and existing branches of Madura Micro Finance, operating efficiencies are likely to be realized which will strengthen PPOP and RoA," said Yes Securities.

The brokerage estimates consolidated return on assets (RoA) delivery of 4.5-4.8 percent over the next two years, manifesting the substantial synergies of Madura Micro Finance (MMFL) acquisition. "Both CreditAccess Grameen and MMFL had healthy Tier-1 capital ratio of 26 percent and 21 percent as on September 30, and the raising of Rs 800 crore through QIP in October by CreditAccess Grameen would support the combined growth in coming years (MMFL to be merged FY22 onwards)," said the brokerage which sees scope for further re-rating as the investor focus shifts to FY22 delivery.

"With abundant funding availability, the company has started pruning excess liquidity and this will reflect positively in the margins. More so, HDFC benefits from the seminal fall in funding rates across sources and this helps in competitive loan pricing and thus in driving growth," the brokerage added.

Over the past few months, the core mortgage business has got re-rated and is currently valued at 2.3x current P/BV. "There exists material scope for further valuation re-rating driven by sustained improvement in disbursement and loan portfolio growth, lesser-than-feared COVID impact and stress in the non-individual portfolio and marginal improvement in NIM/Spread supporting steady profitability. Value creation by the banking, insurance and asset management subsidiaries and associates will continue as growth and profitability prospects are improving and they are trading within their historic valuation band," said Yes Securities.

"With stress recognition and provisioning related to the corporate NPL cycle behind and reasonable provisioning buffer created for likely COVID impact (1.3 percent of loan book), credit cost should fall significantly in FY22 and FY23. Our confidence stems from comforting management commentary on collection trends and evolving restructuring and delinquency patterns, relatively small ‘BB & Below’ book, restrained exposure to NBFC/HFCs, conspicuous absence/lower exposure of the bank to corporates/groups that have recently got in trouble and a high core PCR of 82 percent on NPLs," said Yes Securities.

"Trends in the asset-liability mix, improved relative pricing power, reversion of balance sheet liquidity to usual levels and contained net slippages should benefit NIMs over the medium term. A gradual improvement in the cost metric and core cost/income ratio is highly probable from the accelerated digital business acquisition and execution, and an integrated banking strategy (targeting eco-system opportunities with a coherent approach). Thus, core PPOP margin and growth should get a fillip over FY21-23," the brokerage added.

Yes Securities is positive on Kansai largely backed by expected improvements in structural drivers such as the shift towards the organized sector, housing push in semi-urban and rural areas, shorter painting cycles, governments focus on increasing rural income and increased consumer awareness in rural areas.

"After 5-6 quarters of continuous gross margin expansion, we can see some moderation on account of rising crude prices. However we expect EBIDTA margins to stay in the higher range of 17-18 percent between FY22-FY24 (better than 14-16 percent seen between FY18-FY20) on account of judicious control on costs and overheads and better-fixed cost absorption," said the brokerage which expects a return on equity (ROE) to move to reach 17 percent by FY23.

Yes Securities expects revenue and cost pressure in the short term owing to reduced consumption in the grooming segment.

However, the brokerage is positive on Gillette over the medium to longer-term backed by a) its strong brand recall, b) superior activation and go-to-market plans, c) innovated products range, d) commercial novelties, e) extension of research facilities and technology support by the parent company, and f) robust distribution strategies.

Disclaimer: The views and investment tips expressed by investment expert on Moneycontrol.com are his own and not that of the website or its management. Moneycontrol.com advises users to check with certified experts before taking any investment decisions.
Moneycontrol News
Tags: #Market Edge #Nifty #Sensex #Stocks Views
first published: Jan 8, 2021 02:26 pm