Upcoming Webinar:Join us for webinar on Building portfolio with active funds at 5pm today. Register Now!
you are here: HomeNewsBusinessMarkets

The market is likely to remain volatile in the coming week ahead of the June F&O expiry. The immediate support for the NIfty is placed around 15,450-15,550, while on the higher side, 15,800-15,900 will act as resistance, say experts

The Indian market snapped its four-week winning streak to close in the red on June 18. The S&P BSE Sensex fell 0.25 percent, the Nifty50 was down 0.73 percent and a big selloff was seen in the broader markets during the well.

The market closed lower in three of five trading sessions of the week, largely weighed down by weak global cues. The benchmark indices, however, managed to close above crucial psychological levels, which is a positive sign for the bulls and shows strength at lower levels.

The BSE midcap index fell 3 percent and the smallcap index 1.8 percent for the week ended June 18, data from AceEquity showed. 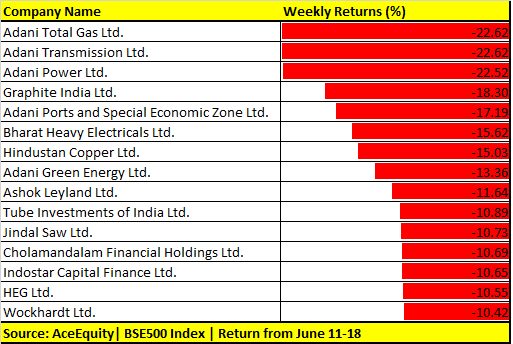 Experts say the near-term underperformance should not be mistaken with a downtrend in the small and midcaps because it is still a bull market.

“The midcaps and small caps have been seeing a correction and this could continue for some more time as commodity stocks also correct. The reason is multifold, ranging from the earlier rise in interest rates to muted expectations from Q1FY22,” Naveen Kulkarni, Chief Investment Officer, Axis Securities, said.

But, the near-term underperformance of small and midcaps was unlikely to last long and they would be back in favour as many were seeing a strong earnings cycle emanating, he said.

Where is Nifty headed?

“We are now stepping into a monthly expiry week and looking at overall positioning of our market, we expect the volatility to increase a bit,” Sameet Chavan, chief analyst-technical & derivatives, Angel Broking, said.

Chavan advised traders to lighten up positions at higher levels and take one step at a time.

Among sectors, despite tepid market conditions, strong buying was seen in FMCG and IT stocks, whereas sustained selling saw the metal index shed more than 6 percent.

Technically, after the strong rally, the Nifty and Sensex formed a Hammer candlestick, indicating indecisiveness in the market.

“The medium-term texture of the benchmark indices is still bullish and likely to continue in the short run. We are of the view that post strong uptrend rally the market is hovering in the range of 15,450 to 15,900/ 51,900-52,850 levels,” Shrikant Chouhan, Executive Vice President, Equity Technical Research, Kotak Securities, said.